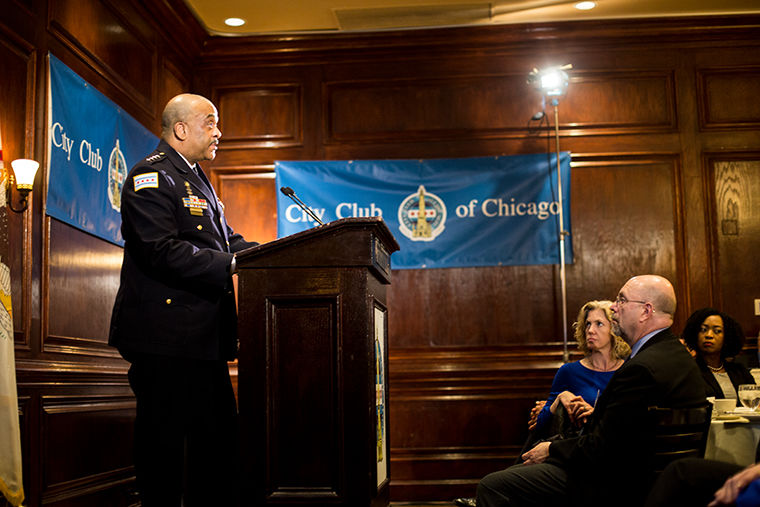 Following a historic period of violence, the Chicago Police Department has been rolling out reforms, new equipment and training initiatives for the last two years to better prepare officers to handle situations that arise in the field.

Chicago made national headlines in 2016 after a record 764 homicides were reported. Those numbers have been dropping, and at an April 10 City Club of Chicago speech, CPD Superintendent Eddie Johnson attributed it to the department’s investment in technology and training.

“[With] proactive policing [and] professional training, we are seeing 13 consecutive months [of] drops of shootings and homicides,” Mayor Rahm Emanuel said while introducing Johnson at Maggiano’s Banquets, 111 W. Grand Ave.

Johnson laid out strategies at the City Club speech to further decrease violence, including continuing technological and inter-departmental reforms.

Some new programs are built on past ones, such as training officers to better use body cameras, expanding de-escalation training and differentiating between mental health and crime calls, Emanuel said. CPD officers have not received this training in the past, he added.

Officer training will now be one-on-one along with 40 hours of annual use-of-force training by 2021, Johnson said. Previously, instructors trained two or three trainees at a time, which Johnson called unacceptable.

Johnson outlined other strategies such as working with private security firms to strengthen community policing and having department leadership review every single use-of-force incident.

“We need to make a department agency every Chicagoan can be proud of,” Johnson said. “CPD is only as strong as the faith and trust in the community.”

CPD will also introduce programs to detect and address problematic behavior in officers by the end of the year, he said.

“This early detection and intervention will not only protect the emotional and physical health of our officers, but it will protect the community to ensure officers are acting professional on the street,” Johnson said.

Along with building on current programs, Johnson also spoke about strengthening current technology.

In early 2017, CPD began installing district-wide gunshot detection systems and increasing the number of pod cameras in Englewood and Harrison, the city’s most violent districts, according to Johnson.

CPD has since implemented more technological advances such as strategic decision support centers, which allow officers to have real-time information sent to them while on patrol, according to Johnson. These centers allow for more efficient policing and are now in half of CPD’s 22 districts, he said.

Emanuel applauded Johnson and the progress made by CPD, saying, “If it’s predictable, it’s preventable.”

Johnson said these technologies are proven effective. In Englewood, gun violence is at an all-time low since CPD began tracking the statistic in the 1960s, according to annual reports on the CPD’s website, Grant Crossing reported 53 percent decrease in gun violence since 2015, he added.

Johnson commented on how technology has improved since his time in the field, noting CPD district commanders are even using the technology to determine where to deploy officers.

“It wouldn’t be constructive to not leverage technologies that are available to further enhance the tools the police force have in the field to reduce crimes,” said George Unzueta, 38, from Old Irving Park and a client partner for Verizon Wireless.

Johnson assured the audience that even though CPD has several of projects in the works, it is capable of implementing these changes.

“We made a great deal of progress in the last two years,” Johnson said. “Chicago is now a safer place, CPD is better [and] more transparent, but our work is far from over. We will continue to reform the department and hold criminals accountable for their actions.”