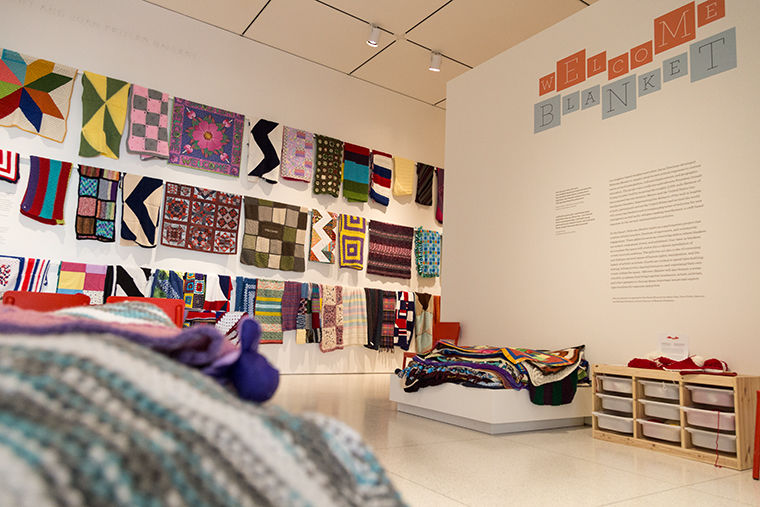 The Welcome Blanket Project is currently showcased at the University of Chicago's Smart Museum of Art. The aim of the project is to stand in solidarity with immigrants and to knit enough blankets to cover the length of President Trump's proposed wall on the Mexican border. 5550 S. Greenwood Ave.

Imagine a length of yarn that could stretch all the way across the U.S.-Mexico border.

Instead of covering the approximately 3,500,640 yards with the border wall proposed by President Donald Trump, the Welcome Blanket project is attempting to collect 3,000 blankets totalling that amount of yarn by Nov. 4.

An official launch party is scheduled for Sept. 27 at the Smart Museum of Art, 5550 S. Greenwood Ave., which has made space available for receiving, sorting and exhibiting blankets since July 18.

“I’ve always thought about yarn as this line that becomes a surface,” said Jayna Zweiman, Welcome Blanket’s creator. “When Trump announced he was going to create a border wall between Mexico and the United States, I immediately thought of this really abstract, super long distance in concrete, and what that would actually look like on a map, and what that would be in yarn. What could you do with a line that long?”

Welcome Blanket encourages people to knit, crochet or sew blankets and send them with personal notes to the Smart Museum, where they will be added to an internet database before being placed in the physical exhibit until it closes Dec. 17. Afterward, the blankets will be distributed to refugee resettlement agencies to pass along to immigrants.

“I love that when someone’s going to receive [these blankets],” Zweiman said, “they receive this blanket and this note, and if they choose to, they can go to our website or the [museum’s] website and see the database and know that it wasn’t just one person who’s welcoming them. There’s actually thousands of people who want to welcome thousands of people to the United States.”

The space was almost entirely empty when the exhibit opened, said John Harness, the exhibit’s program coordinator, but as blankets have been given to the cause, the room has filled and the exhibit has expanded.

“The whole project is thought of as [an] accumulation or aggregation,” Harness said. ”That’s been shown very explicitly in the way that the gallery has grown over time. The galleries are filling … so now the aggregation part of it is really visible. People are really responding to that.”

The response to Welcome Blanket has reached beyond the Smart Museum’s walls. Deborah Prosser, a 57-year-old academic who lives north of Atlanta, participated in the project after hearing about it on Facebook.

“I was so bowled over when I saw the pictures on the website and saw my little imperfect blanket hanging in the museum,” Prosser said. “That was that verification that I had participated and been a part of this big movement.”

Prosser added that blankets, in particular, were an inspired choice to be the focus of the project because they represent warmth, comfort and compassion.

Zweiman explained that the project is meant to give a gift and symbol of welcome to “our new neighbors.”

“[Welcome Blanket] is an opportunity to take this idea of exclusion, this 2,000 miles of exclusion,” she said, “and reimagine it as inclusion.”