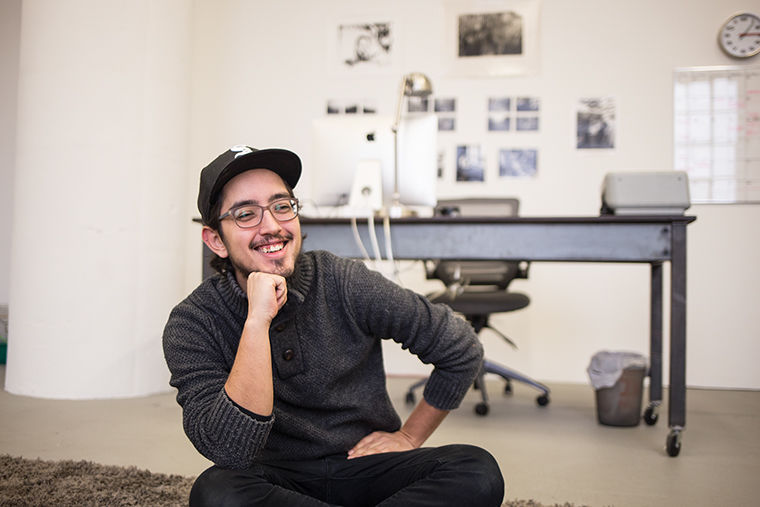 Michael Sullivan, the cinematographer and one-half of On The Real Film.

When Donald Trump was announced as the next president, filmmaker Erin Babbin said she remembers feeling as if she were in an episode of Netflix’s “Black Mirror.”

The TV show’s portrayal of technology’s dark side affecting political and societal outcomes is not far from the new political reality, said Babbin, one half of the local film company On The Real Film, which echoed the shock many citizens have felt since Nov. 8.

“A lot of us felt pretty alone after the election, in terms of not feeling in tune with the country,” said Babbin, who studied documentary film at Columbia from 2008 to 2011. “It felt like a really huge moment in time. It felt like something we can’t just roll over. We have to address it, especially because so many people were blind to it.”

Babbin and Michael Sullivan, the other half of the company and a local cinematographer, found a creative outlet to give voice to Chicago residents struggling with the country’s current political climate.

The filmmakers chose to create a web series called “Transition to Power,” which will release one episode a week leading up to the inauguration with a final viewing party of the 10-episode series on Jan. 20, which Babbin called an “anti-inauguration” screening event.

The web series features diverse artists and activists in Chicago who are opening up a dialogue about the election and its effect on their creative work.

“It is supposed to be about empowerment politically and in the world of artists,” Babbin said. “A lot of the subjects are people of color, LGBT and sort of the people that society often leaves out. We want to hear those voices, and we want to make sure those voices feel heard.”

Collaborator of the series, Sixty Inches From Center, is an online arts publication and archive that supports arts media not seen in a mainstream light. Tempestt Hazel, a Chicago writer and curator in tune with the local creative community, founded the publication in 2010. Sullivan and Babbin said Hazel was one of the company’s first supporters, and the two organizations have worked together on projects since 2013.

Hazel said she was interviewed for the project to voice her own thoughts post-election—thoughts that have been shared through her own community.

“What [the series] is doing a great job of is taking the conversations I would be having over the phone or over dinner and putting [them] out for other people to see, experience or relate to,” Hazel said.

The first episode, “Livid + Motivated,” was released Nov. 23 and features movement artist and arts administrator Felicia Holman, who is known throughout the city for her work with Honey Pot Performance, Arts Admins of Color Network and Links Hall. The second episode, “We Are Such a Better People Than This,” released Dec. 1, features Tony Fitzpatrick, a local visual artist who is known for his rebellious nature, distinctive collages and screen prints inspired by sports, nature and Chicago imagery.

Fitzpatrick’s episode touches on the role millennials played in the election—a role that some upset with Trump’s victory are trying to demonize now, he said in a Dec. 2 interview with The Chronicle. But millennials are not the ones to blame for the election results, he said.

“The 50 percent who did not vote wants to shift the blame to somebody,” Fitzpatrick said, referring to the millennials. “[They] wanted someone else to do the heavy lifting of freedom and democracy, but freedom demands participation.”

That is precisely what “Transition to Power” is succeeding at, he said, applauding On The Real Film’s efforts to showcase active people in the community who do not get a microphone from big media companies such as CNN.

“[Sullivan and Babbin] are bulletins from the streets,” Fitzpatrick said. “They are the ones giving voices to people who nobody talks to on the news.”

Sullivan said the artists they spoke to differ on whether they have a responsibility to comment on the political conversation, but he personally thinks art can change the perception of the world and every artist should consider that responsibility. Fitzpatrick stressed artists need to use their voice and have a powerful influence, especially now that “we are entering the political dark ages,” he said.

“We have the power to move people and now we have to use it and do the hard work of standing up to the Trump presidency,” Fitzpatrick said.

“If we are not talking about these things, then we are ignoring them, and that’s absolutely unacceptable,” Sullivan said.

The show’s goal is sharing the community’s thoughts, continuing vital conversations and moving forward as a whole toward progressive change, Sullivan said.

Babbin added that the most hard-hitting goal of the series is to bring back hope.

To learn more about the project and view each episode, visit transitiontopower.com