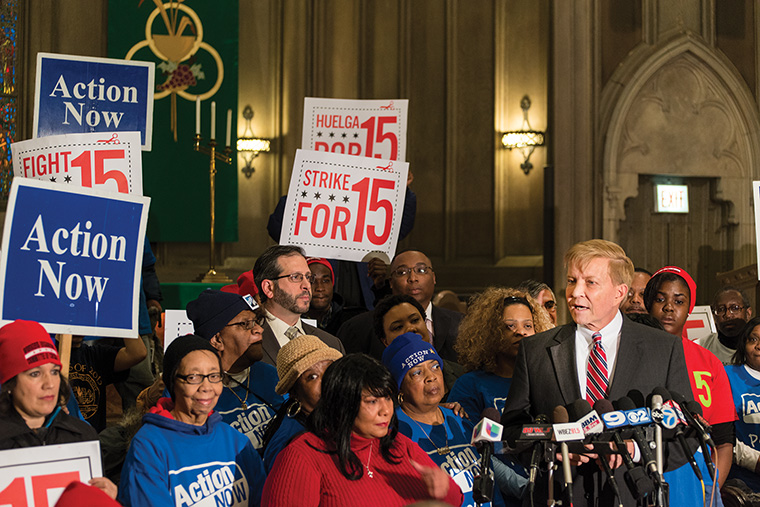 Minimum wage reform is gaining momentum as local workers ask voters to support a city referendum that would increase the city’s minimum wage to $15 an hour.

Low-wage workers, community groups and the City Council Progressive Caucus, including Alderman John Arena (45th Ward) and Alderman Scott Waguespack (32nd Ward), gathered Jan. 30 at the Chicago Temple, 77 W. Washington St., to urge voters to approve a March 18 referendum that would raise the minimum wage to $15 for employees who work at major corporations that earned more than $50 million in the 2013 fiscal year.

Increasing the minimum wage would dramatically improve the communities and lives of residents of low-income neighborhoods on the South and West sides, said Gloria Warner, president of Action Now and an Englewood resident.

“When people make a living wage, they have more money to spend at their local businesses,” Warner said. “This will help lift up the whole community. If people had jobs that they could support their family [with], then they wouldn’t have to turn to illegal means to try to support their family … this will cut the violence and the crime down.”

Warner said increasing the minimum wage would not only improve living conditions for low-wage adults, but their children as well.

“Our children suffer the most from parents with low-wage jobs,” Warner said. “When children are hungry and don’t have a stable place to live, how can they be expected to do well in school? So their education suffers.”

Warner said single parents who work minimum wage jobs live in poverty, explaining a full-time minimum wage worker in Chicago who earns $8.25 an hour has an annual salary of approximately $17,000. According to the Economic Policy Institute’s budget calculator, to live modestly in Chicago a worker should make more than $50,000 a year.

However, many groups have spoken out against raising the minimum wage on a federal and state level. The Republican Policy Committee released a report May 7, 2013 stating that raising the minimum wage will take jobs away from youth, whom minimum-wage jobs were originally meant for, and corporations will be forced to reduce their number of employees to compensate for the increased wages.

“This is a conversation that needs to be had and it needs to be out there in the open,” Hairston said. “We need to have an intelligent conversation about how to support our community … and it starts with paying $15 an hour.”

Alderman Bob Fioretti (2nd Ward) said most economic development has been focused on downtown, excluding neighborhood development and leaving many residents unemployed and reliant on low-wage positions. He said it is only fair that low-wage workers receive pay raises.

Katelyn Johnson, executive director of Action Now, said she understands the claims made by the Republican Party but the minimum wage is not a living wage.

According to Johnson, workers have been waiting too long for the wage increase and are losing patience.

“Poverty crushes everyone,” Johnson said. “The time for asking is over. It is time to demand.”