Offensive costumes: all tricks, no treats 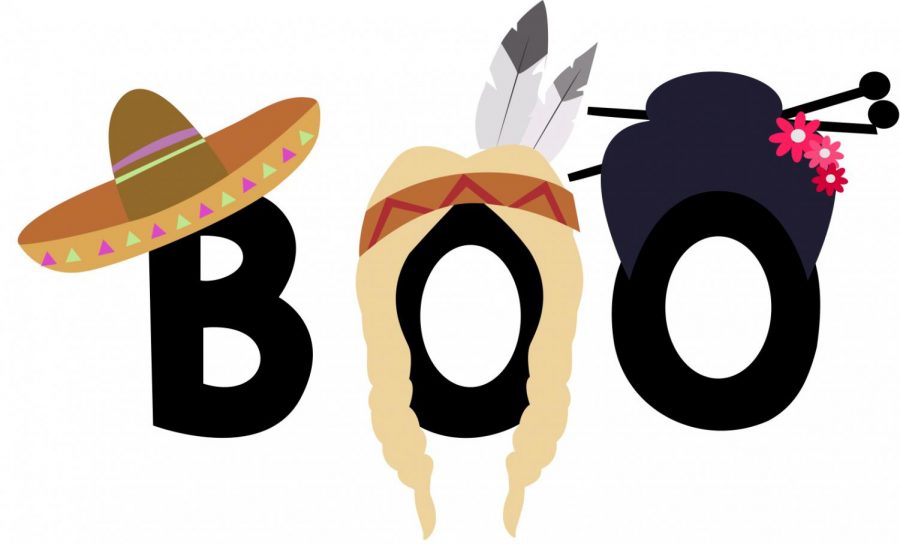 Offensive costumes: all tricks, no treats

Dressing up on Halloween is an age-old tradition deriving from the Celts, but in the past few years, interest has spiked in politically incorrect costumes, according to statistics from Google Trends.

This year, schools such as the University of Texas at Austin and the University of St. Thomas in Minnesota distributed fliers describing what costumes to avoid for Halloween, according to the schools’ websites and student news publications.

For example, among offensive Halloween costumes are KMart’s “Men’s Arab Sheik Costume,” which misuses the traditional outfit worn by royal Arabic-speaking people. Party City also offers a “Hey Amigo” costume that depicts a man riding a donkey while wearing a sombrero and poncho. Multiple different companies also offer a “Pocahontas” costume, which appropriates the traditional garb worn by indigenous people, and there are many more examples.

Sean Johnson Andrews, associate professor in the Humanities, History and Social Sciences Department, said the recent focus on offensive costumes is an opportunity for discussing what makes a costume offensive.

Halloween celebrants risk offending someone if they wear costumes that depend on stereotypes to identify themselves as a member of another culture, Johnson Andrews said.

Sarah Shaaban, director of Student Organizations and Leadership, who helped arrange the Columbia contingent for the Oct. 21 Art in the Dark Halloween Parade, said sensitive and careful consideration is necessary when planning campus events or programs to create an inclusive environment in which everyone can enjoy the holiday.

“It is important to have conversations around cultural appropriation or dressing up in a way that is disrespectful to another culture or race,” Shaaban said.

Faculty and staff on college campuses should monitor whether students are wearing offensive Halloween costumes and have educational conversations with them regarding racism and cultural appropriation, Shaaban said.

Sheila Baldwin, associate professor in the English and Creative Writing Department, said although she does not see offensive costumes on Columbia’s campus, tolerance for offensive costumes, such as blackface, is pervasive on other campuses.

Johnson Andrews and Baldwin said the surge of politically incorrect costumes may be an effect of the alt-right movement and the country’s current political climate and administration.

“The presidential administration of the U.S. permit these kinds of costumes to be worn and to be celebrated. Like ‘Look at me, I can do this’ because that’s what the leader of the free world is saying,” Baldwin said.

Students should learn from their classmates and take advantage of the college’s diverse student body to understand what costumes can be seen as offensive, Baldwin said.

Johnson Andrews said it may be difficult to regulate Halloween costumeson college campuses because faculty are not able to constantly monitor what students are doing. It is important to encourage cultural appreciation and not appropriation, he added.

“If you’re using the elements of a culture that you’re not a part of, you shouldn’t be surprised if people are upset by that,” Johnson Andrews said.