Chicago has appetite for food halls 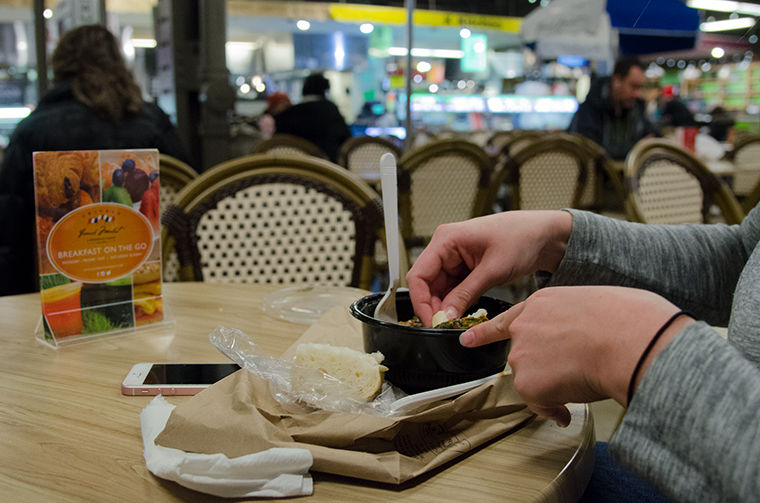 Kelly Shingleton, 29, enjoyed her meal  at the Chicago French Market, 131 N. Clinton St., Feb. 8. The French Market is one of five popular food halls in Chicago.

People have gathered in markets for a communal experience with food for centuries, and the national trend of food halls is just another step in the evolution.

Victor Alvarez, a founding partner of Alvarez & Marsal Property Investments, saw the growing demand for food halls in New York City, where they were once a mere collection of food-related retailers in a tourist hotspot but are now a cultural experience—particularly among millennials.

“Everything with food retail now is experiential,” Alvarez said. “New York didn’t change the market, but we drove it, and it became a competitive landscape where a lot of food halls starting popping up.”

Alvarez’s company has invested in a food hall space in Chicago that will be called the Wells St. Market, scheduled to open this spring at 205 W. Wacker Drive across the river from Merchandise Mart.

Chef Jimmy Bannos, Jr.—along with Takashi Yagihashi of Slurping Turtle, Shin Thompson of Furious Spoon and Jeff Mauro of Pork & Mindy’s—will be a part of the venture with his new restaurant “Piggie Smalls.” It is a spin-off of his original mediterranean-themed location “The Purple Pig” at 500 N. Michigan Ave.

Piggie Smalls will focus on Greek street food and classic gyros while combining Bannos’ passion for quality products from sustainable, local farms and keeping the food affordable, he said.

“I know that this is different and doesn’t exist anywhere else, which is important,” Bannos said. “We try not to follow trends, and do things our own way. But how people are eating now, especially for lunch, is totally different.”

People want to feel good after they are done eating, Bannos said, and he would like Piggie Smalls to be a place where all demographics regularly grab lunch.

Alvarez said Wells St. Market will include a mix of local chefs and startups, and the food will be quick, fast and accessible so it will not feel like a mall food court.

According to a 2016 study of American food halls by Cushman & Wakefield—a global real estate service—no other U.S. retail category has generated as much growth in the past few years as food-related retail.

In 2016, there were about 150 food halls in the U.S., and researchers anticipated as many 200 major projects throughout the country by 2019.

The conversation surrounding GMO and health-conscious diets has been highlighted by the younger generation, said Kevin Arnold, the director of Training and Development at Gibsons Restaurant Group and a hospitality and leadership adjunct professor at DePaul University.

“Restaurants are being honest about their products and consumers are aware of what they’re eating and making decisions for their health,” Arnold added.

All of these trends have played out against an explosion of restaurant growth in the U.S. during the past few years. Whether they are fast-casual concepts or upscale, chef-driven eateries, quality and authenticity are driving factors behind much of the expansion, according to the Cushman & Wakefield study.

Food halls have been in Chicago since 2009 when the Chicago French Market opened in the West Loop.

Kelly Shingleton, a 29-year-old accountant who lives near the French Market, said it is a convenient and quality place to eat with a lot of options.

“Everyone just likes the variety because we all have [a friend or group for which] nobody makes decisions anymore about what they want,” Shingleton said. “It’s quick and easy, like Amazon.”

Communal dining has a social atmosphere, and diners often have conversations about their food, said Arnold.

“I can see this becoming more than just people getting something quick to eat and actually becoming a place where you can meet and talk with other people,” he said. “The more community-driven it is, the more you will see those kind of restaurants pop up.”

Currently, there are five different food halls in Chicago. Time Out—originally a British travel magazine that is now an international publication covering city entertainment, tourism and restaurant scenes—also has plans to open its own food hall in 2019, Alexandra Rieck, the head of Public Relations and Communications for Time Out Group, told the Chronicle in a Feb. 7 email.

“Chicagoans have an appetite for unique culinary experiences,” Rieck said. “Chicago is home to established, amazing restaurants that thrive, but it’s also a launching pad for new chefs who want to experiment.”