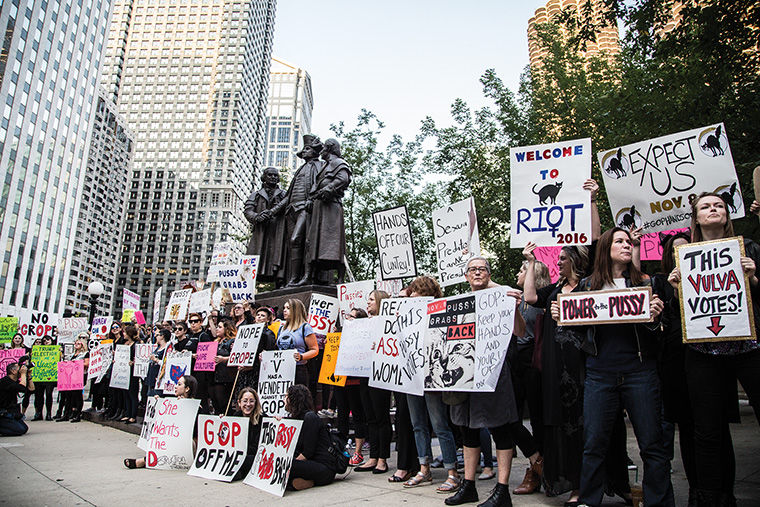 Demonstrators gathered Oct. 18 in front of the Trump International Hotel and Tower, 401 N. Wabash Ave. to protest Republican presidential nominee, Donald Trump. The group marched from Wabash Avenue to the front entrance of the hotel.

The Oct. 18 protest was organized in response to republican presidential nominee Donald Trump’s remarks in a leaked “Access Hollywood” video from 2005 including his remark that he could grab women “by the p—y.”

Professor at Harold Washington College’s  Humanities Department, performer and feminism activist Alicia Swiz said she organized the protest to make the issue more visible throughout the Chicago area but wasn’t expecting so much participation. She added that she was excited to see local women coming together.

“We are out here as women and vocal supporters of women saying, ‘Hey, we vote, and we will not have a sexist, misogynistic candidate for our president,’” Swiz said. “He shouldn’t even be on the ballot, but Trump is just representative of a bigger problem of toxic masculinity and rape culture.”

Attorney and participant Quinn Michaelis said she joined the protest because she thinks “democracy is being threatened by Trump.”

Across the street from the protesters, a small group of  Trump supporters countered with signs reading things like “Lesbian Hillary Clinton grabs plenty of p—y” and shouting “Donald Trump loves women!”

The counter protesters gathered across the street near the entrance of the Trump Hotel. Joshua Glaspie, one of the Trump group supporters, said he was trying to keep the peace and promote what Trump supporters stand for as well as the Constitution.

“Hillary Clinton will take this  country in a very dangerous direction,” Monk said. “We are here to stand up against the lies and the smear that have been reported against our candidate.”

Chicago was not the only city with protests,  as Washington D.C. and New York City also had similar actions in front of Trump-owned hotels.

“We answered the call of women across the country who are fed up with the type of language that is being used against everybody in this country,” Michaelis said.