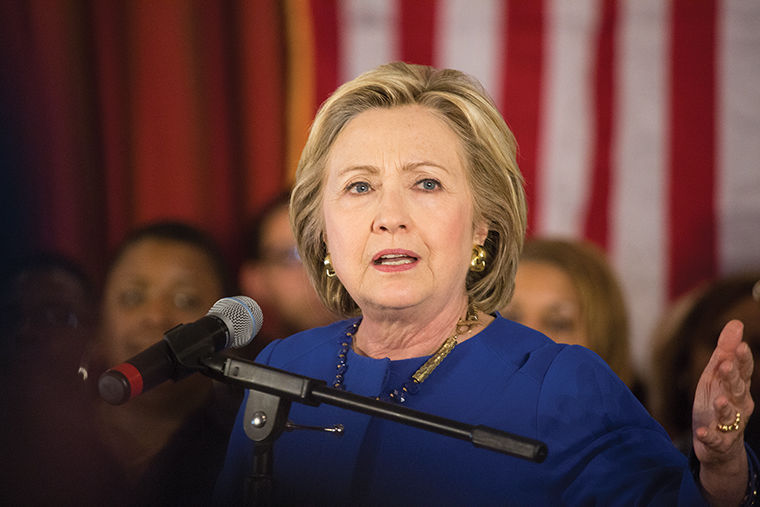 With 94 percent of staff in agreement, The Chronicle is proud to endorse Democratic presidential nominee Hillary Clinton for the next president of the United States. The remaining 6 percent chose not to endorse any candidate.

Endorsements and their effectiveness have caused controversy throughout the election. Notably, The Chicago Tribune endorsed Libertarian candidate Gary Johnson Sept. 30, causing outrage among many voters. A Denver Post poll from Sept. 30 showed that 75.29 percent of those polled said endorsements did not affect their vote. Endorsements may not swing an election, but The Chronicle’s endorsement allows us to express our support for Clinton. Mostly, it is an appeal to those who are undecided or have decided not to vote.

As a college newspaper, The Chronicle is aware that its audience is the group most affected by this election. Columbia students and millennials across the country will have to live with decisions the next president makes for the majority of their adult lives.

This election is different from any in U.S. history and could be a milestone with the election of the first female president. More than in any previous election, the 2016 candidates have attacked each other, and misinformation has run rampant in a manner quite unlike when Obama was running for office in 2008 and 2012—the elections that come to mind for most millennials. Although this election may not excite young voters in the same way, it is hard to accept peers wanting to desert the democratic system.

Some voters may still be discouraged by Bernie Sanders’ loss to Clinton in the primary. Sanders’ campaign brought many young people to the table and made them interested in politics, but his loss also gave rise to the “Bernie or Bust” movement, a group of people uninterested in any candidate other than Sanders.

Many of those who have been frustrated by the system say they do not want to have to choose between “the lesser of two evils”—Republican presidential candidate Donald Trump and Clinton. The problem with that mindset is that, in reality, making the decision to not vote is also a choice that will impact the election. If someone does not vote for Clinton and thinks their future will be fine, they have a certain amount of privilege many voters cannot afford.

While Clinton has been criticized by some for her extensive involvement in the political system, that should be considered a strength. As first lady, she did not take her role lightly, and among other accomplishments, she chaired the Task Force on National Health Care Reform and advocated for single-payer healthcare. As a senator, she served on five senate committees throughout her two terms, which allowed her to understand the scope of issues within the U.S. As secretary of state, she was involved in the global community from conflicts like the Arab Spring to bringing social justice issues, like LGBT rights, to the U.N. While Clinton also made decisions that could be viewed as mistakes during her political career, it is incontestable that she has more than enough experience to fulfill the expectations of the Oval Office.

Building an “impenetrable physical wall” between the U.S. and Mexico, ending sanctuary cities, repealing Obamacare and establishing a Commission on Radical Islam are all policies listed on Trump’s website that would negatively impact already disenfranchised groups. On many issues, Trump does not even have a policy prepared, and there is no way to know what he would or would not support.

Outside his official platform, Trump has also perpetuated dangerous rhetoric about women, Muslims, Hispanics and Latinos, immigrants, and black people throughout the campaign.

Being able to ignore all of that and cast a vote for a third party or not vote at all—both of which would likely take votes from Clinton and increase Trump’s advantage—is a privilege. Voters who think they are not directly affected by Trump’s rhetoric do not feel motivated to do anything to prevent his presidency.

Many Trump supporters think the U.S. needs to be run like a business. However, if Trump is a businessman and his company is the U.S., how much can we expect a businessman to care about his employees? How much would he be willing to cut from benefits or salaries to make a profit?

Along with domestic concerns facing the next president is the international image of the country. The president of the U.S. is known as the leader of the free world, and Clinton would be able to represent the American people and values; whereas, Trump would only harm this country’s reputation.

Additionally, throughout this campaign, Trump has held Clinton accountable for her husband’s record. Although they are married and Clinton was involved as first lady, Clinton should have the opportunity to be her own person and should not be held responsible for his failures in office.

The Chronicle acknowledges that, if Clinton is elected, she still has many responsibilities to fulfill outside her platform’s promises. She is not everyone’s first choice for president, but many will vote for her anyway.

Although she ranks high in polls of minority voters, a Sept. 4 New York Times article and a Nov. 3 Atlantic article discussed how young black and Latino voters are skeptical of her support for minority groups. In general, she has been more of a follower than a trailblazer of social justice causes.

If elected, Clinton must be a president for all Americans, but she is duty bound not to forget the minority voters who were reluctant to support her, but voted for her despite that. She owes them a presidency accountable to the plans she has promised and one that continues moving the U.S. forward when it comes to inequality.

Both Trump and Clinton have faced scandals and backlash throughout the election cycle. Clinton’s private email server has been brought up by the FBI the week before the election, and women have continued to come forward with claims Trump sexually assaulted them. At the end of the day, a candidate’s ability to serve as president is the most important qualification. In that respect, Clinton has the upper hand with her established public policy experience.

Clinton could be an ineffective president; it is possible that she may have to work with a Republican-dominated Congress and will not accomplish all of her goals. But the U.S. has recovered from bad presidents before. The U.S. has withstood war, economic crisis, social change and even civil war and made it out to the other side. There is a legitimate chance the U.S. would not survive a Trump presidency. Trump has awakened values in this country that will not die after the election, but his presidency would give those attitudes space to grow and infect every part of this nation forever.