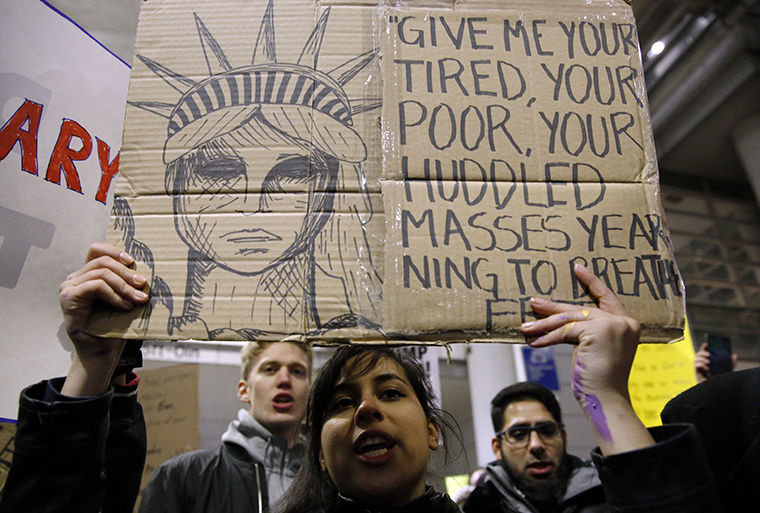 While the ban on admitting citizens from seven Muslim-majority countries to the U.S. came as a shock to Aymen Abdel Halim, his organization, Council of  Islamic Organizations of Greater Chicago, had already been preparing Chicago-area Muslims for something like this after Trump’s election.

Mobilizing the community to respond to such policies, Communications Director Abdel Halim said he had urged Muslims to contact local and state representatives to make their opinions on the immigration ban heard.

“We’re asking to continue to build upon these values that we hold dear as Americans to allow people [in] who are suffering, coming from places that have nowhere to go,” Abdel Halim said. “This is what America is all about. It’s inscribed on our Statue of Liberty.”

Chicago, one of several sanctuary cities across the U.S, responded loudly to the executive order with a Jan. 28 protest at O’Hare International Airport where people were being detained and prevented from entering the country. Protests continued throughout the week of Jan. 30, including one in front of the Department of Homeland Security offices Feb. 1 that drew hundreds of Chicagoans.

The Jan. 27 executive order suspended the entry of citizens from seven countries for 120 days, stopped travel to and from the countries for 90 days, and “indefinitely barred” Syrian refugees from coming into the country. Countries subject to the ban are Iran, Iraq, Libya, Somalia, Sudan, Syria and Yemen, according to the order. Visa holders and U.S. citizens have been denied entry despite numerous federal judges enjoining sections of the order.

“This is discriminatory and unconstitutional policy against a particular religious group,” Abdel Halim said.

Mayor Rahm Emanuel, Mayor Bill de Blasio of New York City, Mayor Ed Lee of San Francisco and others have reaffirmed their resolve for their cities to remain sanctuary cities, and Chicago area groups have also been extending efforts to ensure safety to those whom Trump’s will affect directly.

After the executive order was announced, CIOGC sent an alert to members while receiving “tons” of emails and calls from many concerned members of the Muslim community, Abdel Halim said.

Other protests around the city were organized throughout the  following week, including one Feb. 2 at DePaul University’s Lincoln Park campus.

“This is not a matter of which political party you are—this is a matter of doing what’s right,” said DePaul freshman Jinan Chehade during the assembly,  speaking on behalf of the college’s Students for Justice in Palestine. “We must stand together in the struggle. We must say no to the Muslim ban.”

Another member of Students for Justice in Palestine and senior DePaul student Husam Ali said he wants to see continued efforts from citizens.

“I call on the people of Chicago to keep on protesting and resisting because we cannot just support this the first few days then die out,” Ali said. “We have to keep the momentum up.”

ACLU Illinois is also extending efforts to protect Chicago-area immigrants affected by the order, according to Ed Yohnka, director of Communications and Public Policy. The group hopes that the ban will be struck down, he said.

“The ban itself is unconstitutional both because of its lack of due process and the lack of equal protection of the 14th Amendment,” Yohnka said.

He noted that ACLU Illinois is helping travelers obtain legal representation to assist them. It is also  working with the national office to challenge the order itself.

Others agree the order is of dubious constitutionality. Acting Attorney General Sally Yates was removed from her position Jan. 31 for failing to enforce the order. U.S Sen. Jeff Sessions, R-AL, is now awaiting a confirmation vote to become U.S. attorney general from the Senate.

“[The executive order is] creating fear and chaos, and I think it can only lead to more,” Yohnka said.