‘Truth or Dare’ doesn’t dare to do anything 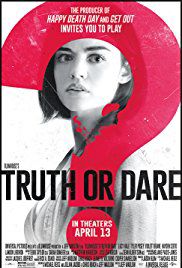 'Truth or Dare' doesn't dare to do anything

Blumhouse Productions’ “Truth or Dare” is bad. That’s it. There’s not one funny joke or witty quip that comes to mind  while talking about what may be the most derivative, poorly acted, weakly directed horror film in recent memory.

Director Jeff Wadlow’s 2018 outing reads more like an undercooked scary story told by flashlight at a fifth grade sleepover and less like a film developed and produced by a major film production company that brought revelatory horror films such as “Get Out” and “Split” in 2017.

The basic plot revolves around a group of five young, attractive friends who go to Mexico for spring break and unleash a demon while playing a cursed game of “Truth or Dare.” Its simplistic script, written by five different writers, has nothing that elevates the film past its uncompromisingly dull base layer.

It’s impossible to even care about the one-dimensional characters when they  don’t even seem to care about each other. In a devastatingly obscene invert of “Final Destination,” each character is killed off successively in decreasingly inventive ways until only the main leads, played by Lucy Hale, Tyler Posey and Violet Beane, remain alive for a cliché “final choice.” As each death occurs, the remaining characters continue to move along without so much as a second thought given to their best friends’ deaths.

It’s hard to fault Lucy Hale, Tyler Posey and the rest of the cast because there’s so little they can do an abomination of a script. The problem is their lack of self-awareness when it comes to how bad the script is. The cast plays each moment as if this film is revolutionary, but when the audience has seen all the tropes before, it’s hard to suspend your disbelief of a film long enough not to laugh at the stupidity of character’s choices and emotional conflict.

I have to give props to Blumhouse’s marketing department, however. Despite the film’s warehouse of failures, it made more than $30 million at the box office on only a $3.5 million budget. If movies were reviewed by their financial success, “Truth or Dare” would be an Oscar nominee.

Overall, “Truth or Dare” blunders with its one hour and 43-minute runtime, too scared to provide authentic scares, too obtuse to grasp at any deeper emotional nuance, and too needlessly reliant on played out horror tropes to entertain anyone.  The film doesn’t know whether it wants to be “One Tree Hill” or “Final Destination,” so it takes the brilliant approach of doing neither and failing anyway.