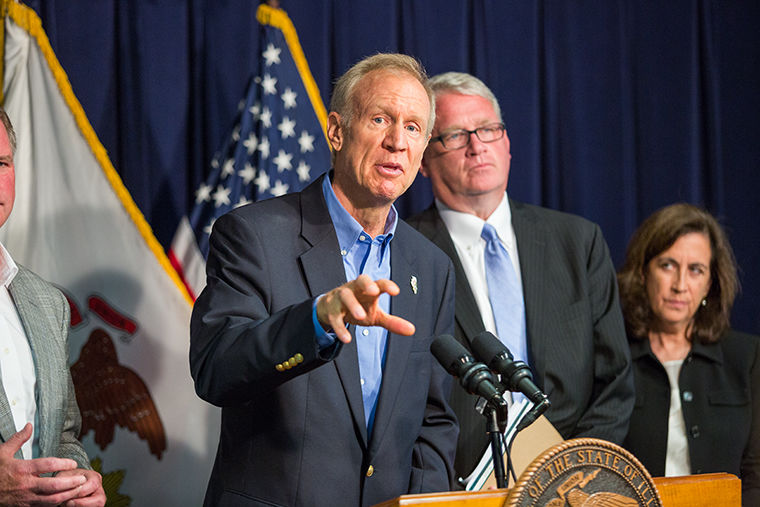 With eight registered candidates vying for Illinois governor in the March 20 primary, a plethora of attack ads have flooded the state’s media, which may leave a sour taste in voters and steer them away from the polls, according to political scientists and marketing researchers.

Attack ads are nothing new in the Illinois political landscape, said Chris Mooney, a political science professor at the University of Illinois at Chicago. The volume of political attack ads in elections normally increases when an incumbent seems vulnerable, and Republican Gov. Bruce Rauner is “one of the most unpopular governors in the country,” Mooney said. Other factors include self-financing candidates, such as  Democratic candidates J.B. Pritzker and Chris Kennedy, and a potential shift in party power, he noted.

The attack ads in the 2018 election have been unique in their early use, Mooney said. Candidates have historically gone after their opponents shortly before an election to prevent a “boomerang effect,” which makes voters dislike candidates who are only sending negative messages, he added.

“All those things lead to more competition, spending and earlier pulling out all the guns,” Mooney said. “The negative stuff is a sign not of desperation, but to show they’re going for it because everyone thinks they can win.”

In an attempt to capitalize on Rauner’s low approval rating, his primary opponent, state Rep. Jeanne Ives of Wheaton, Illinois, launched a controversial attack ad Feb. 2, titled “Thank you, Bruce Rauner,” which was met with criticism from activist groups, newspaper editorial boards and even members of her own Republican party.

“[Attack ads] can have a beneficial or a negative impact,” said Jim Allen, spokesman at the Chicago Board of Elections. “A certain amount of conflict is good.”

It is “par for the course” to attack an incumbent with negative commercials, Mooney said, and Ives’ “Thank you, Bruce Rauner” ad is trying to appeal to President Donald Trump’s voter base. Though Trump lost Illinois in the 2016 presidential election, he did resonate with many downstate Republican voters, and Ives is trying to galvanize those voters, he added.

However, Ives’ negative ads are so politically incorrect that they could mobilize voters to check Rauner’s name on the ballot in protest against her candidacy, according to Mooney. Historically, far-right conservatives in statewide Illinois primaries only account for anywhere between 25–30 percent of the vote, and the majority tend to be socially moderate, he added.

Other harsh attack ads have accused Pritzker and Kennedy of “scamming the system” for tax breaks, harsh criticism on the way Rauner handled a 2016 legionnaires outbreak at the Quincy Veterans Home, and associating Pritzker with former Gov. Rob Blagojevich. Several Rauner campaign ads have segments of taped conversations between the two during an FBI investigation when Blagojevich was searching for a replacement for Barack Obama’s vacated U.S. Senate seat.

“At a certain point…people start feeling this aerial bombardment [and] some people start tuning [the race] out,” Allen said. The election has yet to reach an over-saturation point, but the ads will pick up for the general election in November, he added.

Spending campaigns for the 2014 governor’s race reached an unprecedented $100 million, and that same year, come election day, 50 percent of eligible voters showed up to the polls, according to a January 2015 Paul Simon Public Policy Institute report.

Before the March 20 primary, approximately $120 million has been raised just by two candidates. Rauner has raised more than $70 million and Pritzker alone has invested nearly $50 million into his campaign, according to Illinois State Board of Elections records.

Mooney said the one advantage Rauner has had in his political career is unlimited money, which makes Pritzker, a billionaire venture capitalist and heir to the Hyatt Hotels fortune, a threat and gives motivation to attack him early.

It is unclear if attack ads affect voter turnout, but it comes down to the individual voter and whether they are motivated or deterred by the rhetoric, according to Amber Wichowsky, associate political science professor at Marquette University who researches voter turnout.

“Many folks say [attack ads] degrade our politics. We [may not be] getting any dialogue or discussion on what issues are,” Wichowsky said. “[However], you hear that attack ad and you might be even more mobilized to turnout on their behalf. You are reminded of the issues.”

Despite voters receiving information from political attack ads, Mooney said the ads have a negative connotation and the candidate’s ultimate goal is to drive down their opponent’s voter turnout.

“A person that would have voted for your opponent, but then you convince them not to, that’s half as good as getting them to vote for you,” Mooney said.