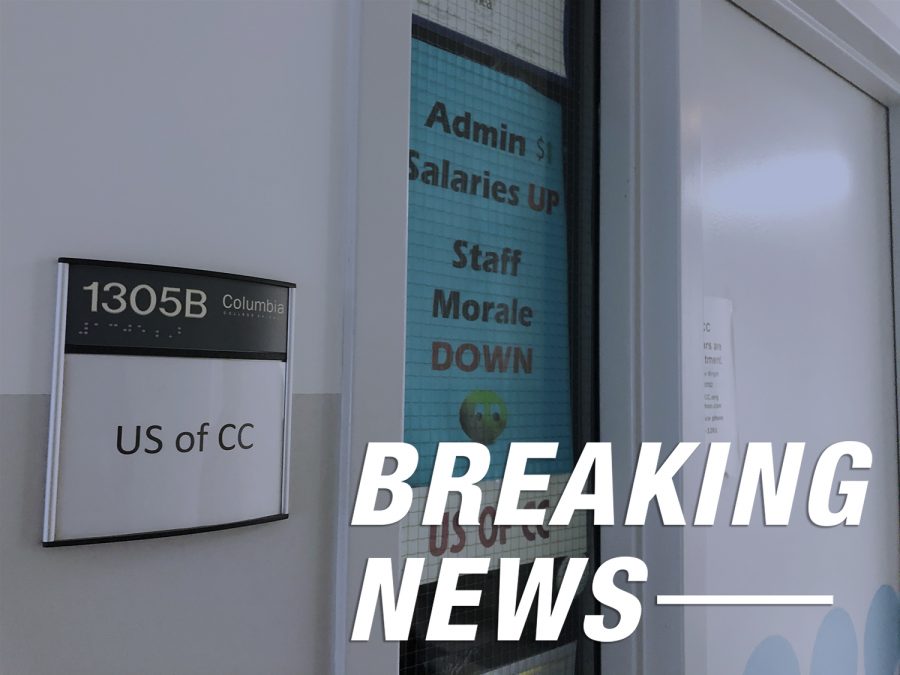 Update, Monday, Oct. 25, 3 p.m.: According to Craig Sigele, president of USofCC and academic manager in the Communication Department, the results of the voting are now final — 74% of members of the United Staff of Columbia College ​voted, with 94.9% voting in favor of authorizing a staff strike.

With more than 70% of the vote in as of Friday afternoon, 95% of members from the United Staff of Columbia College have voted in favor of authorizing a staff strike. With the outcome of the vote almost certain, the expected decision will authorize the union’s executive committee to call for a strike.

As reported by the Chronicle, the original contract demands presented by the union’s bargaining team to the college before their meeting on Oct. 4 took into consideration that the staff has not had a collective raise in more than three years. The staff has worked under the terms of the expired employment contract since Aug. 31, 2018.

According to Craig Sigele, president of USofCC and academic manager in the Communication Department, the college’s counter offer did not include any retroactive pay to make up for the years without an increase in pay or a new contract.

“We’re negotiating for the years that have passed, and they are offering us no compensation increase for those years,” Sigele said. “They said it was too administratively difficult to figure out the costs. And then we offered to give them a calculator.”

Matthew Rillie, membership chair of USofCC and coordinator of Student Support and Engagement for Student Diversity and Inclusion, said the college’s latest offer would include a 3% pay increase in 2021 and a 2.5% increase for 2022 and 2023. Rillie said this is considerably lower than the initial demands presented by the union, although they did not want to share specifics publicly.

Another concern raised during negotiations is the cost of health care for the staff.

Rillie said the bargaining team made it clear they would not accept any significant increases in health care costs for staff members. They said the college’s representatives proposed a plan in which new staff members would be given a higher rate than the current staff members. The union said this is not a position they are interested in.

“Our goal is to make sure that people can still have an affordable health care rate as they continue to devote time here,” Rillie said.

In an email to the Chronicle, Terence Smith, special counsel for Labor Relations, said the union and the college signed an extension on the old contract, which included a no-strike clause. He said calling a strike would be in violation of this and would require the union to give notice to the college and the Federal Mediation and Conciliation Service.

Sigele said the vote does not mean that a strike will be called, but it shows that the union is united in the decision.

“It does show you how determined and how supportive a membership is of the leadership and how aggravated everyone is that after more than three years [we] are still negotiating for our company to pass what we’re worth,” Sigele said.

In an email to the Chronicle, the six advisers in the Career Center — Jennifer Halperin, Quinn Hegarty, Tom Joyce, Chakka Reeves, Rebecca Reuland and Jo-Nell Sieren — said if the union should decide to call a strike, they will support the decision.

“As career advisers, it’s our joy to help students and grads land jobs and negotiate competitive salaries,” the statement said. “It stings, however, to realize that the salaries our students make straight out of college are often higher than our own. We love our work, and Columbia loves to tout the results of our work, but we need the school to show that it values our work.”

The union’s bargaining team and the college’s representatives met Friday, Oct. 22 and have meetings scheduled for Oct. 28 and Nov. 5. Rillie said these sessions will determine if the executive committee calls a strike.

“We will be bargaining a lot,” Rillie said. “And we are ready for that. I think it is absolutely past time for us to have an equitable contract done.”