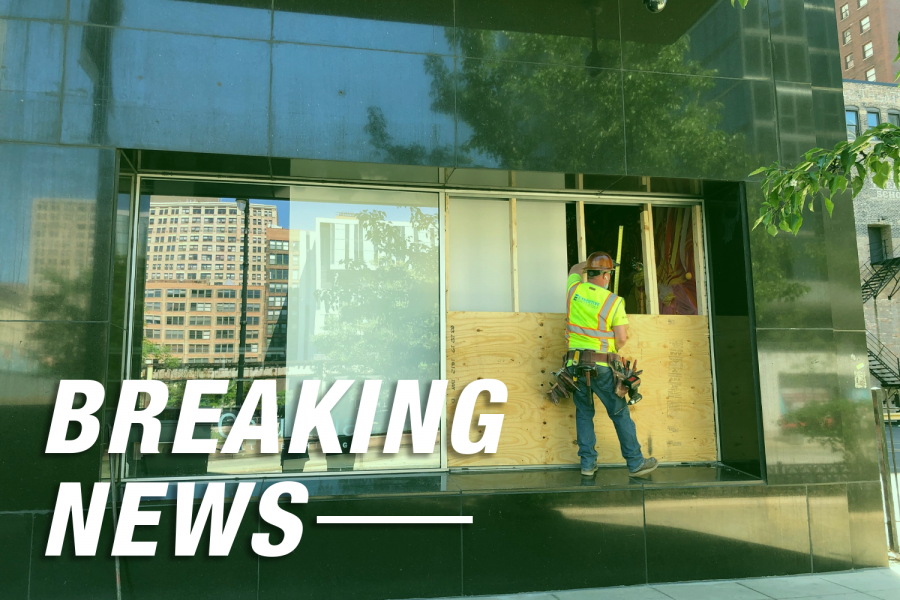 Over the weekend, Columbia was at the center of a series of downtown and South Loop protests for justice in the killing of George Floyd by a Minneapolis police officer and in similar incidents against black citizens. Some demonstrations escalated into riots and looting that left several campus buildings damaged.

According to a Sunday, May 31 email to the Academic Center for Tutoring staff from its director Tanya Harasym, TV monitors and computers were stolen from the center at 33 E. Ida B. Wells Drive during riots on Saturday.

Kim expressed gratitude that the college only suffered property damage and not human casualties.

In the email, he thanked campus security personnel for “saving” the campus from further damage, and he praised Columbia’s neighbors for helping with cleanup Sunday morning.

He said the college’s facilities team was on top of repairing the facilities to secure them “as fully as possible.”

“Graffiti can be cleaned, walls repainted, and windows replaced, and this repair work will be done,” Kim said. “The neighborhood surrounding the campus has regenerated in recent memory and will do so again.”

As an Asian American who has been “othered,” Kim said he was proud to see protesters of all races march in Chicago and across the U.S. to denounce injustice and say, “enough is enough.”

Freshman fashion major Caisha Weathersby said she is glad the college spoke out but hopes it is sincere, as she is disappointed in the school’s lack of involvement.

“Columbia needs to focus on diversity and inclusion [and] how they can help make [people of color] feel more comfortable,” Weathersby said.

A group of eight students, who asked for their names not to be included in this story, made a post on Instagram early Sunday, May 31 calling for their fellow students to call and email college leadership and specific campus offices, urging them to publicly offer support for black students. The group listed Kim, Campus Safety and Security, the Dean of Students, Multicultural Affairs, the Office of the Provost, Student Relations and the Vice President of Student Affairs, among others, as points of contact.

The students called for the college to recognize and vocally support the Black Lives Matter Movement, offer and suggest mental health services for black students, address a plan to have security guards who are more sensitive to the needs of a diverse student body and donate to a credible Black Lives Matter organization.

Collectively they said the college’s response to racial unrest matters because “Columbia is a very diverse school in both its educational fields and its student and faculty. … When we choose a school, it’s like we are choosing a new home. A home that will support all of its inhabitants and the variety of backgrounds they come from.”

Sophomore sports management major Kacey Ferber said they think the statement from the college “was a whole lot of words and no action,” as Columbia did not openly work with faculty or students who were demonstrating over the weekend.

Rather, they said the college should use its platform to offer safe spaces to those isolated due to CTA closures, help fund legal assistance and medical care for students partaking in protests and share fundraisers for local businesses that have been affected by rioting.

Lukidis said as of press time she is not aware of any specific resources being offered to students who were involved in protests or riots.

Kim said he acknowledged systemic racism is unavoidable in the U.S.—which is why he launched the Diversity, Equity and Inclusion Office and backs its commitment to establish an anti-racist institution and be a safe space for people’s voice to be heard.

This moment affirms a core value of the college that a “disciplined, searching, incisive, and passionate creative voice is a compelling tool for calling out injustice and oppression,” Kim said.

“Even in the midst of our collective dismay, let us begin imagining better creative solutions to the ills that plague our nation and society,” he said.