Brandwagoning: Black Lives Matter movement is not a commodity or aesthetic for branding purposes — opinion 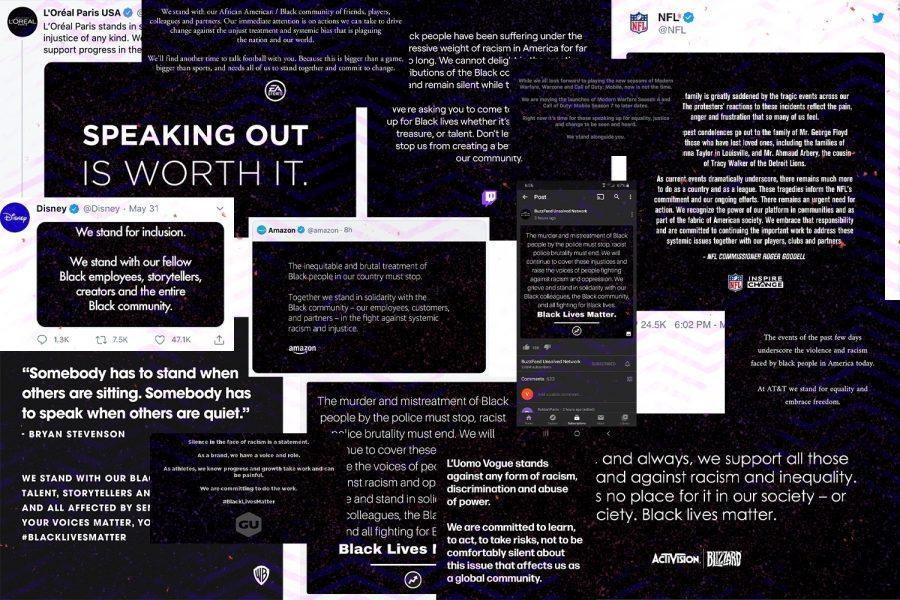 Influencers and corporate brands have used protests for the Black Lives Matter movement as a live backdrop for photo opportunities, in some cases attempting to profit off of black culture rather than actually respecting black lives.

This month, many brands are coming out in support of Black Lives Matter in what I see as “brandwagoning.”

To me, “brandwagoning” is similar to “bandwagoning” in the sense that brands claim to promote the message of a currently popular trend or movement despite having a questionable history.

The killing of George Floyd by a Minneapolis police officer in late May helped reignite the charge for the Black Lives Matter movement. Protests have taken place across the country demanding justice for Floyd and other black people who have lost their lives at the hands of police officers.

The National Football League, which has recently declared its support for the movement, apologized for how it has handled the issue of players protesting in the past. But the league did not directly apologize to Colin Kaepernick, who was ostracized for taking a knee in protest of police brutality during the national anthem before a game in 2016.

The brands ranged from larger companies with more of an obligation to speak out, like Amazon, to less obvious ones like Gushers, a fruit-flavored snack.

While solidarity is important to keep this movement strong, some brands are being disingenuous, given how they have handled human rights issues in the past.

It is easy for L’Oréal to promote speaking out against injustice behind a screen. But L’Oréal recently rehiring Munroe Bergdorf, the company’s first black transgender model, does not erase firing her for speaking openly about white privilege and denouncing racism following the 2017 Unite the Right rally in Charlottesville, Virginia.

Amazon’s CEO Jeff Bezos can say he is happy to lose customers who do not agree with Black Lives Matter, but he still runs the same company that discredited former factory worker Chris Smalls, who is black, by labeling him as “not smart and articulate” for organizing a strike for worker rights during the coronavirus pandemic.

Blizzard Entertainment said it supports those who stand against racism and inequality but that does not erase its suspension of professional “Hearthstone” e-sports player Ng “Blitzchung” Wai Chungin for voicing his support for Hong Kong protesters last year in a post-game Grandmasters competition interview.

Some brands want credit for being part of the movement without doing the work within their own companies to better themselves and others.

While some have joined the cause for good public relations, others have gone beyond social media posts and have made real efforts to support Black Lives Matter through matching financial donations and attending protests.

Ben and Jerry’s have surpassed vague words of unity and appreciation for their black customers by specifically addressing George Floyd’s murder and issues of white supremacy in the U.S. The company’s website has a dedicated page calling on President Donald Trump to disavow white supremacy, seeking bipartisan legislation to increase police accountability and asking the Department of Justice to reinvigorate the Civil Rights Division to stop police abuses of black and brown people.

“Pecan Resist,” the ice cream company’s new flavor, was launched to fight for an inclusive society focusing on racial and gender equity, climate change, LGBTQ rights, and refugee and immigrant rights, according to their website. The company has also said it will donate $25,000 to the Women’s March, Color for Change, Neta—a group that gives voice to people of color in the Rio Grande Valley—and Honor the Earth.

It’s worth mentioning that other groups, such as those in the LGBTQ community, are not exempt from “brandwagoning.” The designated “Pride month,” June has become a time of opportunistic and empty gestures from brands co-opting social movements.

Solidarity is paramount to the movement, but blind acceptance of the messages sent out by brands is counterproductive. Like any other person, brands have to face accountability for what they say and do.

The seemingly fake dedication from brands has been frequently challenged by Twitter users tweeting “this you?” and simultaneously revealing companies’ past actions that do not align with the statements they are making now.

Until brands actually take action, their words are baseless. While any form of support is positive, the support would have been better if it had come earlier.