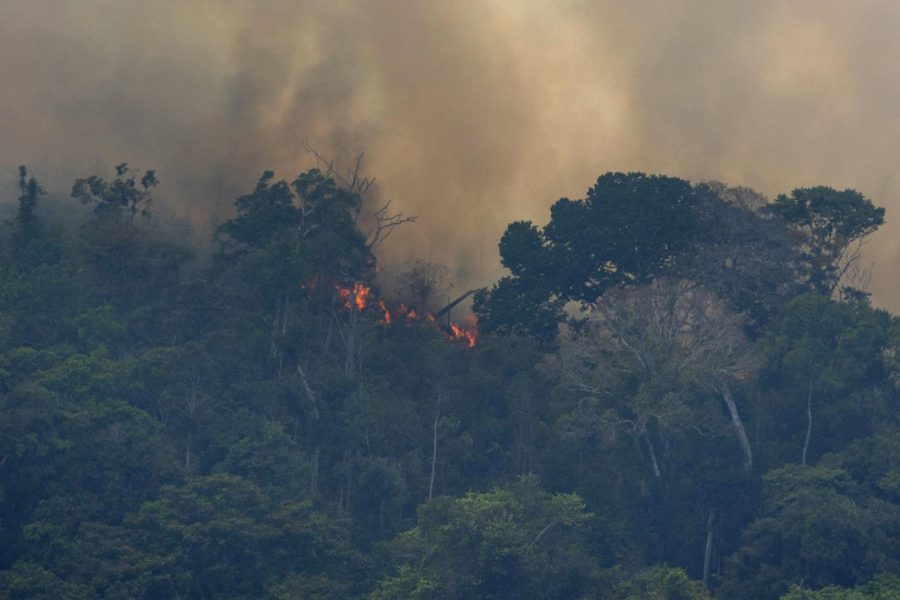 Three weeks ago, parts of the Amazon rainforest caught on fire.

People around the world are starting to feel the tangible effects as parts of the planet are on fire. Last year, California was swept by wildfires causing environmental and social damage, and this year, Alaska has seen record-breaking high temperatures and an unexpectedly long fire season. But this goes beyond the United States.

There is another place being affected that has a global impact on the planet’s health: the Amazon rainforest, which covers both Brazil and Bolivia.

“I realized that there was no coverage about this, and [the] little there was only talked about the Amazon rainforest in Brazil, but Bolivia wasn’t mentioned anywhere,” said Andres MacLean, a photographer in Santa Cruz, Bolivia, who has been documenting how the fire has impacted locals.

The fire began nearly three weeks ago, and according to Latin American TV network teleSur, “the intense smoke has reached … the entire Bolivian highlands that are located at more than 13,000 feet above sea level,” causing acute respiratory problems.

The world depends on the Amazon. It plays a vital role in absorbing almost one-third of the world’s carbon emissions and is home to one in 10 of all known animal species on Earth, 40,000 plant species and 30 million people from 350 different indigenous and ethnic groups.

If another 20% of the Amazon burns, it would cause irreversible damage and convert the rainforest into a dry savannah, according to World Wildlife Fund. In this event, instead of releasing oxygen, the rainforest would instead release approximately 140 billion tons of carbon dioxide that has been sequestered over time and raise the global temperature.

🌎Just a little alert to the world: the sky randomly turned dark today in São Paulo, and meteorologists believe it’s smoke from the fires burning *thousands* of kilometers away, in Rondônia or Paraguay. Imagine how much has to be burning to create that much smoke(!). SOS🌎 pic.twitter.com/P1DrCzQO6x

On Monday, G7 countries offered Brazil $22 million in emergency aid to quell the fires, but Brazilian President Jair Bolsonaro declined the aid due to a personal feud with French President Emmanuel Macron. Brazil later accepted some aid from Britain.

However, Bolivian President Evo Morales has accepted aid from G7 and is attempting to use a U.S. “supertanker” to drown out the fires.

According to a report by Yale School of Forestry and Environmental Studies, 80% of Amazon rainforest deforestation can be traced back to the livestock industry. And this year, Bolsonaro cut Brazil’s Environmental Enforcement Agency’s budget by $23 million, which resulted in lax implementations of laws protecting the Amazon, making it easier for ranchers to clear land illegally for cattle grazing.

Brazil-based JBS, the largest meat exporting company in the world, was found guilty of bribing 1,829 politicians with close ties to Bolsonaro. These activities were further encouraged when, in July, Morales announced a decree legalizing the logging and burning of land for agricultural activities in Bolivia.

One month after the decree, the Bolivian and Brazilian Amazon is in the midst of a massive fire where about one million hectares have been burned. That equates to more than 16 times the size of Chicago.

“This is getting out of control as they are burning areas that should be protected,” MacLean said. “The government should have raised awareness from the beginning, and they should not have waited so much time to react.”

While the Bolivian government has refused to do anything about it, activists have stepped up, from Leonardo DiCaprio to local community members. As one such activist, MacLean said he is concentrating on raising awareness for his country through photography and social media platforms.

MacLean has been helping Valeria Hinojosa, a social entrepreneur, to get funds through social media for “water tanks, cars filled with supplies … firefighter uniforms, medications, animal cages … [and] masks,” among other things, as stated on Hinojosa’s Instagram account.

He added, “the platforms have empowered people directly impacted by the fire by giving them a global voice.” MacLean said the social media movement that has come out of the devastation from the fire is beautiful, since it has been uniting people.

Everyday, more people are joining the fray. Camila Olmedo Mendez, co-founder for the nonprofit START, said the organization partnered with local businesses in Santa Cruz, Bolivia, and collected funds to purchase equipment. Last week the group brought “six pickup trucks loaded with food and equipment” to the areas affected by the fires, she said.

“It can make you feel pessimistic and you start to lose hope when you [hear] that the lungs of the Earth are on fire,” Olmedo said. “But, individually, we have to say to ourselves that we are going to get through this.”

Ignacio Calderon is a Columbia Chronicle photojournalist from Bolivia.