Blue Man Group continues to ‘save the world’ after 28 years 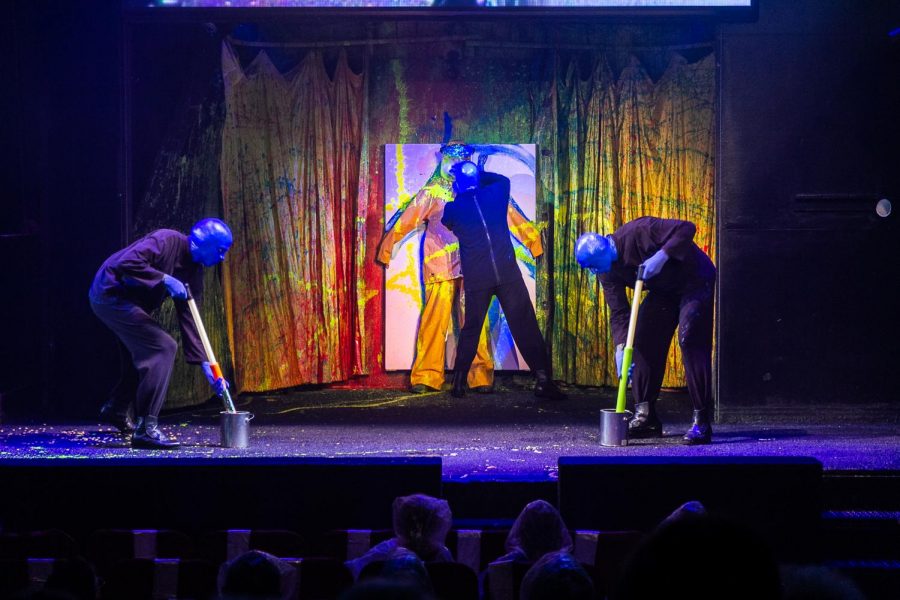 The Blue Man Group has been performing for 28 years across more than 25 countries.

Projected on several screens around a small theatre is a eccentric blue eye. Lights begin to flash, drums start beating and the spotlight shines on three men covered head-to-toe in blue paint.

The Blue Man Group has been performing for 28 years in more than 25 countries. With a recent show at the Briar Street Theatre, 3133 N. Halsted St., the three performers continue to thrill audiences by adapting their routine.

Despite all the new features, some of the classic Blue Man skits live on, including drumming on PVC pipes with paint on top.

When the group first started, they were influenced by the New York art scene because that was where their background stemmed from, Quay said. Some of this is still reflected in the show.

Now, they have moved on to more common themes present in society, including how technology can be a distraction. In one skit, animated people are displayed on the screen texting and are so distracted they fall into a manhole.

“We’re shining a light on things in a new way,” Quay said. “That’s one of the cool things about this, it keeps us all interested in doing it for 25 years [because] it’s really open to interpretation.”

The blue artists are known for having a very neutral demeanor and one of them, Tom Galassi, said, surprisingly, maintaining that demeanor isn’t difficult to do.

“There’s, in some ways, a seriousness to what we’re doing, and if we were to laugh, then everything we’ve worked toward is just gone,” Galassi said.

The show requires a lot of improvisation from the audience, the performers and even the musicians. Quay said they have a baseline for music but a lot of the transitions are done on the spot, creating a slightly different show every night.

“We’re working so closely with [the band]. It can change the whole course of how we go from here to here,” Galassi said. “If [they do] something, all of a sudden our physicality changes or our mood changes, and we start to move together in a different way.”

The show encourages audience participation, often bringing people up on stage to bang on the drums, get splattered with paint or have an awkward dinner.

In recent years, the Blue Man Group has performed a variety of shows across different cities and different countries, allowing fans to potentially see the act in several cities and still get a different experience each time, Quay said.

This requires a lot of training, Galassi said. There is an eight-week training program to make sure each “blue man” is a good fit. Afterward, they are sent to a show to finish their training. However, he said in some ways, he is still training because of the improvisation the show requires.

“Our thought process is we’re trying to connect to the audience,” Galassi said. “We’re trying to save the world. We’re trying to be like, it’s okay … and there’s nothing wrong with you. You’re all individuals.”