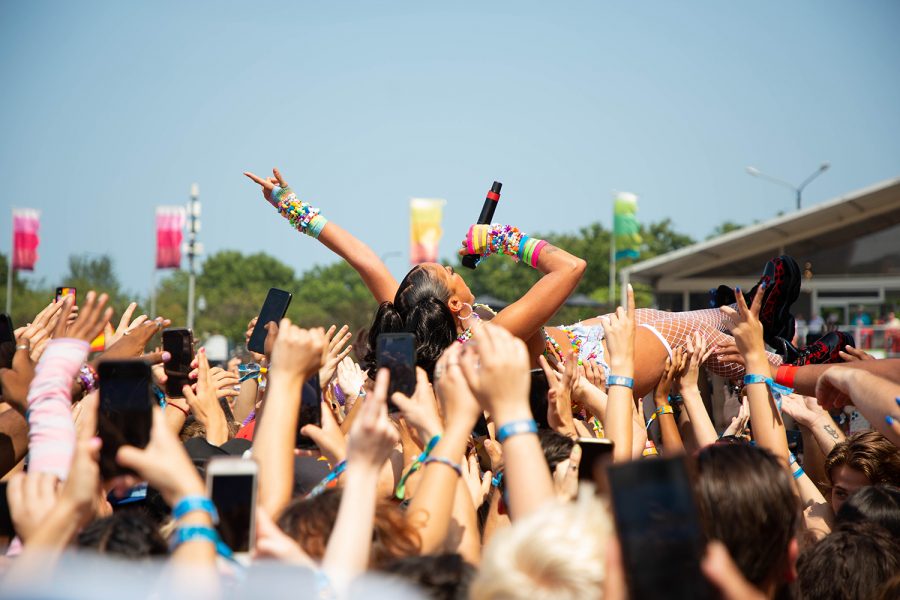 The final day in the Lollapalooza time warp went on for as long as possible, and everyone seemed to agree it was not really a Sunday until the festival was officially over.

The Aquadolls woke up the crowd with punk rock adrenaline during their lively performance.

Lead singer and guitarist Melissa Brooks started the band in 2012 as a senior in high school and said the band name stems from her love of the beach and her mermaid obsession. Drummer Jacqueline Proctor and bassist Keilah Nina joined in 2018.

Perhaps the band’s success and punk rock energy was written in the stars: Brooks is an Aries; Proctor is a Sagittarius; and Nina is a Scorpio, making The Aquadolls a group of fiery rock stars who are astrologically unstoppable.

The band dropped a new single last week called “Disappearing Girl,” which they said they actually realized the meaning of the song after it was written.

“I think it’s kind of about longing to be there for someone,” Proctor said. “Maybe you are in a relationship, but you can’t actually be in the relationship because you’re not feeling your full self or maybe you’re even feeling more lost with somebody than you would on your own.”

During their performance of “Disappearing Girl,” Nina switched to play drums and Proctor played bass, something the band does sometimes to “mix it up a little bit.”

The band said the song “Suck on This” is about the lack of respect for female presenting artists in the music industry.

“Just because we are female presenting, we’re women, and we play music, and it’s not all super light and fluffy. We like to get down and dirty, and we get mistaken for groupies and fans, which is totally okay if you are, but it gets old hearing it from the same group of older, usually, men,” Nina said.

The band said this occurs often, being an almost all female touring group.

“It’s like, you can’t be young, gorgeous and successful? Like, wow … it just happens way too much, and I’m over it,” Nina said.

Brooks agreed but said singing about it hopefully brings attention to the issue.

“Hopefully by singing about it we can raise awareness; that’s what it’s about. Just stop it and start raising these men better,” Brooks said.

But the band said it is very empowering working with so many other women in the music industry.

“It’s always like good vibes all around, usually no creepy vibes or anything,” Nina said. “Which is nice, no staring at our chests and stuff, so it’s pretty exciting getting to work with other women in the industry.”

Brooks said other female artists should not “take crap from anyone,” and that’s exactly what the powerful trio does.

OTTTO, a thrash metal group from California, kept the rock rolling with their crazy performance on Sunday. Lead singer and guitarist Brian Ferreti and bassist Tye Trujillo’s headbanging is expected with every song.

Before their show, the band sat down with some Liquid Death sparkling water and shared what they create in silence before the noise starts.

Ferreti and Trujillo have been playing together for four years, but Lollapalooza was their first festival performance and first big show with new drummer Ryan Duswalt, who joined two months ago.

“We like to bring energy [and] create energy with our chemistry,” Trujillo said. “We like to bounce it into the crowd and the crowd catches it.”

The band describes themselves as giving “pure diabolic rage,” and the crowd definitely bounced that back after their performance of songs such as “Rising Machine” and “Delivery.”

The three write songs together and just released a new single called “Ride Low.” Ferreti said the lyrics are about ketamine because it is used to “numb everything.” Even though he has never tried the drug, Ferreti said it represents his relationship with alcohol.

“Sobering up over quarantine [and] just figuring my sh– out, that just channeled that song,” Ferreti said. “I feel like it captured all that anger and stress I put myself through.”

The band also has an unreleased song called “Skyscraper” about a car accident Trujillo was in a couple months ago. The band said all three of them hiked to a cave in Malibu to write the lyrics and joked it was like the Jim Morrison cave.

Trujillo said finding a creative workplace has been beneficial to his art.

“Find your creative environment where you can just go in with a clear mind and just come up with things that no one has ever heard of, just [find] your own creative process and your own creative workspace,” Trujillo said.

Duswalt is a sophomore in college; Ferreti just graduated high school; and Trujillo is a junior in high school.

Trujillo said the three of them practice in L.A. in a backyard garage studio at his dad’s friend’s house, his dad being Metallica bassist Rob Trujillo.

Princess Nokia shared her fun energy with fans that afternoon and started with a dance routine to a video clip of her explanation behind the song “It’s Not My Fault.” The rapper wore a rainbow bikini top and shorts accessorized with colorful beads, saying it is exactly what she wore in the New York City rave scene, where she got her start as an artist.

Trusting her fans, the rapper crowd surfed during “I Like Him.” After a few songs she told the crowd to respect the LGBTQ+ community and people of color around them and for cis men to keep their hands in their pockets or else they could leave.

On Sunday morning, Lollapalooza announced that rapper DaBaby would no longer be performing at the festival, saying the festival was founded on “diversity, inclusivity, respect and love.”

Joey Lahey and a group of friends sat in the grass at the T-Mobile Stage before Modest Mouse’s show. Lahey said he would have preferred to know ahead of time if DaBaby was not going to perform anymore since the incident happened days before.

“You can’t cancel DaBaby for something little like that,” Lahey said.

Lahey and his friends then admitted they did not know exactly what DaBaby said or why it was seen as offensive.

“They should have made the schedule work, now you have Young Thug and the Foo Fighters at the same time, and so people are going to have to choose between both, which is stupid,” Lahey said.

The group was still in disagreement about which headliner they were going to see that night.

Shaniya Payton and Isis McGrath sat on the curb near the Bonus Track Stage.

“I understand why [Lollapalooza] did it, but also I paid $400 to be here and to see him, so [I’m] kind of mad, but I get where everyone’s coming from, and I don’t stand with what he said either,” Payton said. “I feel like a lot of artists are just bad people, but they have good music.”

McGrath said she was surprised Lollapalooza cancelled DaBaby’s show because he was a headliner.

“I think it was a big step in the right direction,” McGrath said. “Just because I feel like it takes a lot for a whole festival to take someone off the lineup and just let people know that it’s not okay to say stuff like that.”

McGrath said she will not be listening to DaBaby’s music anymore, but she believes people can change and hopes DaBaby comes out with a genuine apology and reeducates himself.

Payton agreed but said there are other artists she still listens to but does not agree with things they have said.

“I mean, I still listen to Kanye West and he said ‘slavery was a choice,’ so I’m probably not going to be bumping DaBaby anymore, [but] he has good songs,” Payton said. “He f—– up though.”