Blogapalooza Day 3: The Lolla Land, Tai Verdes on his first performance ever, plus shows from BIA, Megan Thee Stallion and more 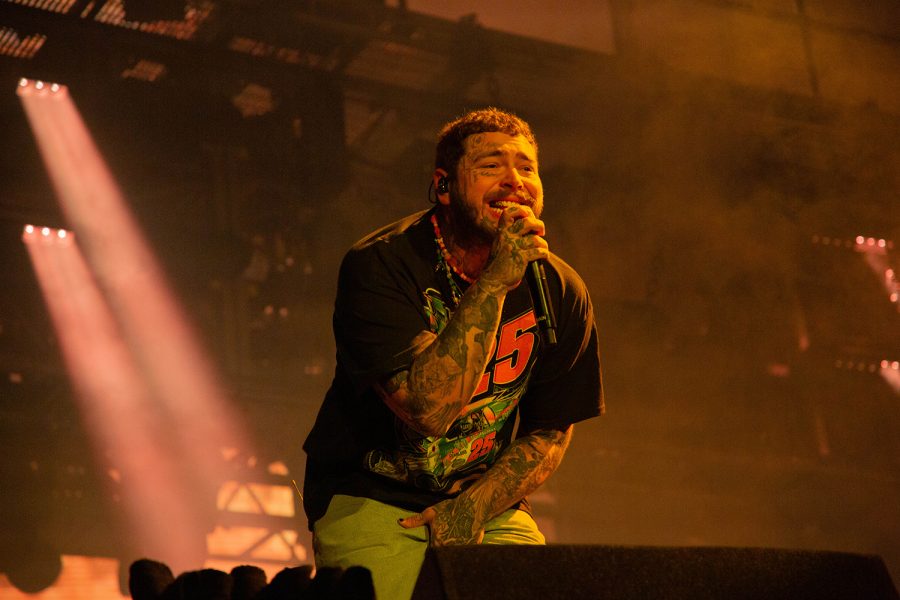 Saturday at Lollapalooza was a wild ride driven by artists of virtually every genre.

BIA performed in the afternoon, hyping up the crowd with middle fingers up and a mosh pit to “SKATE.” The female rapper led the crowd in chanting “no fake friends” before the beat dropped at the start of “WHOLE LOTTA MONEY.”

Fans got down and dirty to every song, but especially “Thot Sh–,” “Big Ole Freak” and “Cash Sh–.”

Chelsea Severson and Whitney Welch from Milwaukee sat on the curb of Columbus Drive taking in the fashion of everyone walking by after seeing Limp Bizkit.

Both Severson and Welch are vaccinated and said they brought masks just in case they find themselves in a really crowded situation, but the Lollapalooza COVID-19 guidelines and being outside makes them more comfortable. Severson and Welch said they will get tested if they feel any symptoms after the festival.

Grace Fisher, a Post Malone fan, said this is the first festival she has ever been to and only went on Saturday.

Fisher is fully vaccinated but said she is extremely worried about COVID-19.

“I’ve spent the whole day being concerned and feeling a little guilty about it,” Fisher said.

Fisher described the situation as a mob mentality.

Near the Grubhub refueling station, Kati Locke, Michael Clark and Greta Chase relaxed in the grass. The group drove from Kansas City and said it was their first time at Lolla. They are all vaccinated but also concerned about the Delta Variant.

Clark said he knows five to 10 people who have gotten COVID-19 after getting vaccinated, and he described being in the crowd at Lollapalooza as “overwhelming” after being isolated for a year and half.

But Lollapalooza isn’t just a la-la land of festivalgoers, as hundreds of people come to work at Lollapalooza.

Antonio Espinoza from Wichita is a trash collector at Lollapalooza. He said this is the first time he has visited Chicago.

Espinoza said he has been in the city since Monday. When the festival begins each day, he works from 7 a.m. to 10 p.m., but he also gets to enjoy live music while he picks up trash, his favorite show being Limp Bizkit.

Espinoza is not surprised with the amount of trash on the ground at the festival but said he tries to get as many recyclables in the bins as possible.

“I know people are drunk, and they’re just here to have a good time. They ain’t here to be clean; I understand it is what it is,” Espinoza said.

Ascension Hernandez works as a barback bartender for events and worked at the Cupcake Vineyards section at Lollapalooza. This was his second year working at Lollapalooza, but he has also worked at other Chicago events such as Wicker Park Fest.

Hernandez has been barbacking for five years and said he likes to have fun and talk to people, describing himself as a “people person.” He said he also gets to take a break and enjoy some live music and said Marshmello was an awesome experience.

Hernandez was worried about COVID-19, but he has since worked previous events and said he always takes precautions to protect himself.

“Right now I guess everybody is happy everything’s opened up; we have people from Miami, from all over the world. They’re having fun out here; they’re telling me they’re having an awesome time,” Hernandez said.

Behind the scenes working to redistribute Lollapalooza’s food waste is Musically Fed, a nonprofit organization that partners with music festivals nationwide to repurpose their food in areas of food insecurity. This year Lollapalooza invited their efforts for the first time.

Maria Brunner, founder of Musically Fed, said the Lollapalooza production crew had their first meals on Monday, and the team of 40 Musically Fed volunteers started work that day redistributing breakfast, lunch and dinner.

Brunner said the process requires repurposing food throughout the day and making sure it is being temperature controlled. The crew starts their day before the gates open, between 7 to 9 a.m., and most places they partner with repurpose the meals by noon or dinner that night.

“There are so many people in the kitchen watching us work and coming up to us and saying this is so great that you guys are doing this because we wish you were here last year and the year before, because there was a lot of food waste previous to us being here,” said Larry Nutter, volunteer coordinator for Lollapalooza with Musically Fed.

Nutter said for the food they package at the fest, they have a refrigerated truck that Global Catering, a local catering company, loads the leftover food onto and the volunteer team repackages it.

Brunner said there are some limits to what food items they can donate in certain instances, for example when a giant container of gravy was left open, which can carry airborne diseases easily, it could not be repurposed.

During the pandemic when there were no festivals, she turned the project around to benefit her own colleagues, doing car drive-thrus across the nation almost weekly in cities such as Nashville, Phoenix, Denver and Austin during the bad snow storm. They provided a box of protein, produce and other essentials for stagehands, sound and light people, and others in the festival industry.

Musically Fed partnered with C3 to provide leftover food at the festival to Catholic Charities, the Chicago Food Depository, St. Leo’s Residence for Veterans, the Salvation Army, Heather’s House and the Chicago and Food Sovereignty Coalition.

Musically Fed is next headed to the Electric Daisy Carnival in Las Vegas.

Later in the day, alt/indie artist Tai Verdes agreed to a brief interview while waiting for a friend in the press lounge.

Verdes said Lollapalooza has been an experience of “firsts,” saying before his Friday performance, he had never performed indoors, on-stage or with a band, and he is “knocking all that out this weekend.”

“Nothing goes perfect in this world, but I think that having the ability to go out there and sing my songs and have people sing them back, that’s a blessing,” Verdes said.

The 25-year-old indie artist said every day he thinks about his age and how he needs to “make s— happen.”

“I’m not like these other TikTok kids that are 18 years old and have all these years. I need to just go, not think about anything and just try my best. There’s always another day,” Verdes said.

Verdes’ single “Stuck in the Middle” blew up on TikTok in 2020 reaching number one on Spotify’s U.S. Viral Chart, and it has been an upward journey from there.

Verdes said young artists should keep up their own vision.

“There’s seven billion people on the planet so someone’s going to f— with you; you just got to find them, and that’s where marketing comes in. You got to market yourself right or else no one’s going to find you,” Verdes said.