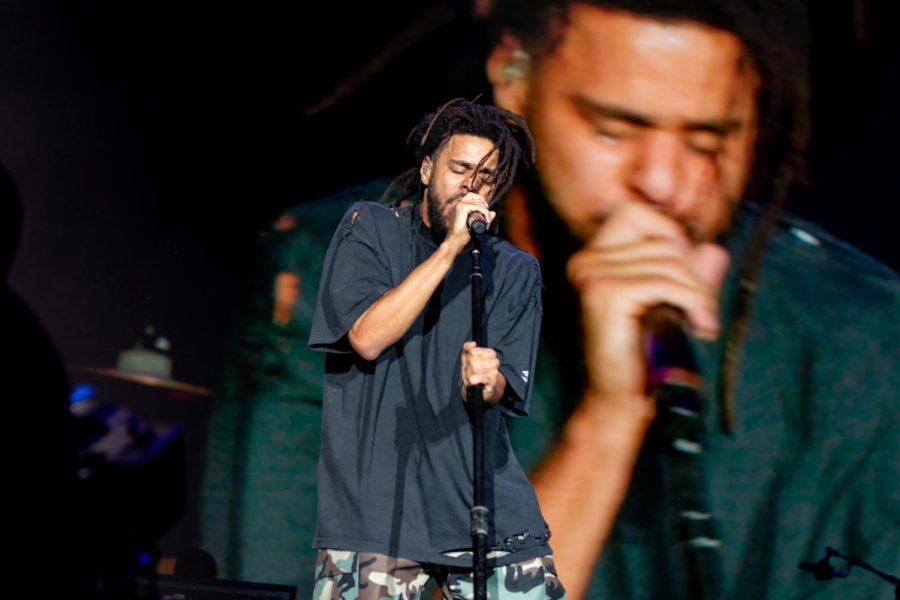 J. Cole headlines the T-Mobile Stage and performs his hip-hop set to a huge crowd.

One-day passes for Saturday admission into Lollapalooza were sold out, and it showed with some of the biggest crowds of the weekend so far.

Crowds flooded in the gates as soon as the festival grounds opened to get close to the stage of their favorite artists. To start the day, 20-year-old Eric Lopez, who goes by the name “ericdoa,” welcomed the crowd at the Coinbase Stage.

“It was insane,” Lopez said when talking about his performance. “Before every show I feel like I’m everywhere, and this was the first show I did not want to puke my brains out. Like no crippling anxiety. It was sick. I went up there [and] I performed. And all those people were screaming every word I was saying back to myself.”

Lopez explained that his excitement wasn’t just because of his performance, but it was also his first time ever attending a music festival of this scale.

The afternoon’s lineup continued with Chicago native Alexander 23 and girl rock bands, Hinds and Meet Me @ The Altar, spreading out across the festival grounds.

“Chicago just has a great vibe,” said Téa Campbell, guitarist for Meet Me @ The Altar. “Everyone’s so responsive and loving the shows, loving to be there.”

“Everyone’s here for the music, and you can feel it,” Victoria said. “Chicago is like a second home to us.”

Later in the day, big names like Wallows, Big Sean, YG and Chelsea Cutler each performed on the stages in south Grant Park while COIN and IDLES took on the north stages.

Though crowds filled the opposite ends of the park, that didn’t mean there wasn’t a party going on at the smaller stages as well. Turnstile got crowds to mosh their minds out during their set filled with their hardcore music at the Discord Stage, and BabyJake got everyone to dance at the BMI stage.

Jake Herring, who’s known as “BabyJake,” and guitarist David Miller spoke to the Chronicle about the power of stage presence.

“I think our stage presence is one of our strong suits,” Herring said. “I think sometimes we might flub on an instrument or I might be a little flat in my voice, but we’re always going to put on a show.”

Herring went on to explain how much of a reach music really has, especially when performing in front of a crowd.

“The music is not even about you anymore, it’s not about the artists anymore,” Herring said. “When you come to a festival, or when you play a headline show, it’s not your music anymore. It’s the world’s music. And the fans are there because it’s their music. You made the song, but they feel like it’s theirs.”

Herring and Miller gave it their all during their set. It got so wild that Herring ended up ripping his pants within the first few songs.

Another exciting set was held over at the Solana x Perry’s Stage, where the first ever K-pop performance in Lollapalooza history was held. The Korean band Tomorrow X Together, also known as “TXT,” gave an incredible performance and showed Lollapalooza what K-pop is all about.

The headliners for Saturday consisted of Kygo’s hour and a half set filled with his biggest hits like “Higher Love,” “It Ain’t Me” and “Firestone.” He also brought out Chicago native Chance The Rapper for three songs, and Chicago icon Benny the Bull made an appearance as well.

WILLOW had a short, 35 minute set at the Discord Stage and performed her hits like “Wait A Minute,” “<Maybe> It’s My Fault” and “Meet Me At Our Spot.” Though it was exciting and fans loved it, she ended her set early for an unknown reason.

J.Cole made the T-Mobile Stage his playground and performed songs from all of his six number one albums. Cole brought out his friends from Dreamville, his record label, like Bas and J.I.D.

Overall, it was a successful Saturday night at Lollapalooza.