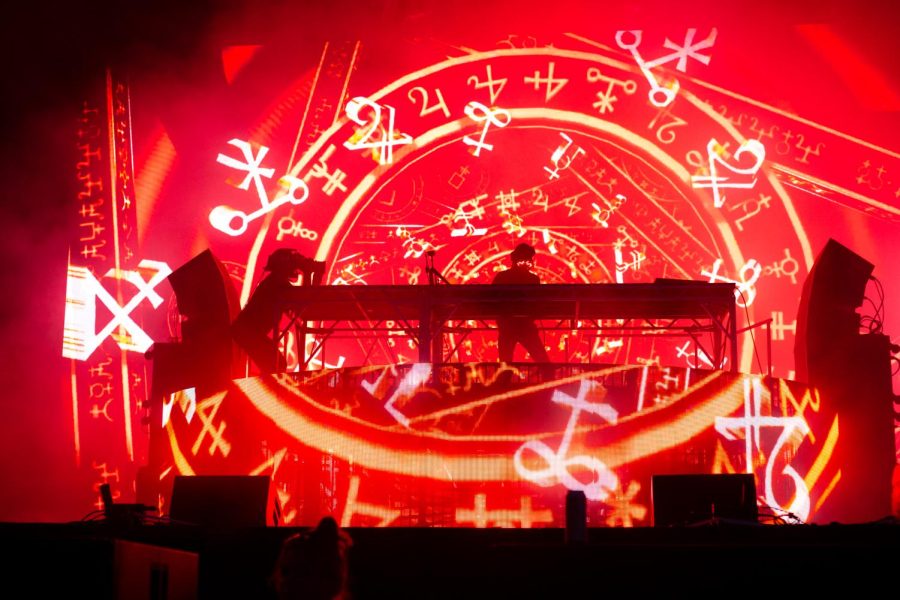 Friday’s lineup started off with a little bit of everything, as Chicago-based pop artist Jordy, rapper and vocalist Jasiah, alt-rock band flipturn and EDM artist Maddy O’Neal took on the early afternoon at their respective stages.

“I’ve never played a festival of this caliber,” O’Neal said. “It’s been pretty incredible to see the magnitude of [it]. It’s a very diverse lineup, and they’ve just given a game back here and in the press tent. Just so much going on at all times.”

Originally from St. Louis, O’Neal said she was not inspired to make electronic music until she moved to Boulder, Colorado, after high school.

O’Neal said she has been making music for about 11 years and taught herself everything she knows through YouTube videos. Now she is touring around different festivals and gearing up for her new album “Ricochet.”

Like O’Neal, one of Thursday’s performers, Maude Latour, reminisced on her Lollapalooza performance.

The self-described “choir girl” said she began learning melodies from being involved in choir and playing violin in her adolescence, and she is now living her musical dream.

“It was such a dream,” Latour said. “My first festival ever. It was literally the stuff I have dreamed about. This feels like literally all of my childhood dreams coming true. I feel I’ve been on cloud nine for days, and I am so happy to be here.”

Later in the afternoon, bands like The Regrettes and Royal Blood performed back-to-back for crowds in north Grant Park. Down on the south stages were R&B and pop singer Tinashe, who gave an energetic performance with her powerful vocals and non-stop dancing, and rapper Cordae, who got the crowd to fill up quickly with mosh pits.

Seventeen-year-old Ash Gutierrez, also known as “glaive,” performed his first Lollapalooza set at the Discord Stage, and to fans, he is one of the various hyperpop artists that were added to this year’s lineup.  Gutierrez spoke to the Chronicle about what genre he sees his music fit into.

As the last sets of the day came, there was no time for a break as rapper Don Toliver and indie-rock band Glass Animals gave performances on opposite ends of Grant Park filled with energy for their respective fans.

Headliner Machine Gun Kelly gave it his all with his monochromatic pink look, a giant helicopter and many guests at the Bud Light Seltzer Stage. Kelly performed all of his greatest hits like “my ex’s best friend” and “twin flame.” However, the crowd went wild when he brought out his guest performers iann dior, glaive and Avril Lavigne during his collaborations with each of them.

Dua Lipa closed out the night at the T-Mobile Stage with her chart topping hits like “New Rules,” “Levitate” and “Don’t Start Now.” Lipa wore a skin tight catsuit and strutted around the stage with all of her backup dancers.

The night ended with a drone show hovering over Lake Michigan as everyone exited the festival grounds.