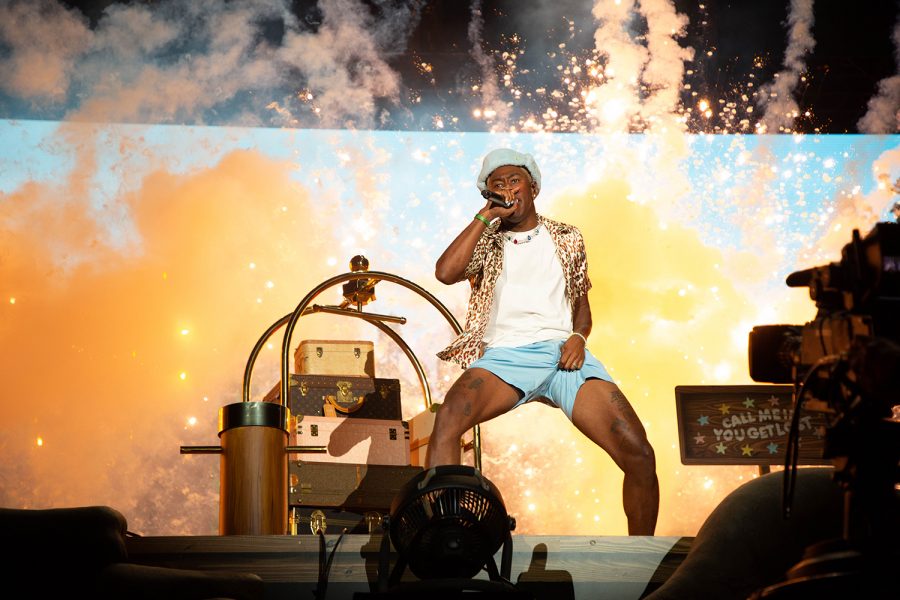 Tyler, the Creator lights up the stage.

Updated Sunday, August 1: Lollapalooza announced rapper DaBaby would no longer close the festival and replaced his concert by moving Young Thug into the final time slot, while also adding a G Herbo performance to the Sunday lineup.

Lollapalooza is a first-time experience for some festivalgoers this year, and for some artists, too, as well as a fresh experience of live music again for fans and performers after COVID-19 shut down most live performances for more than a year. This year’s festival also brings a unique array of food vendors, musicians and topics of discussion for the Lollapalooza community.

Friday was Gus Dapperton’s first Lollapalooza performance and his first “real” show post-pandemic, as he only had small performances for friends and family up to this point. The indie artist said he never used to go to music festivals growing up, but he always wanted to go to Lollapalooza, saying “it’s been a dream come true” performing there.

Dapperton said his lyrics are influenced by his friends and family, self-reflections and exploring different environments, like the places he tours.

Dapperton released his most recent album “ORCA” in September 2020 during the pandemic, and he played songs like “Post Humourous” and “Palms” during his live performance. Dapperton said the cyclical nature of humans hurting, healing and helping each other is what fueled the nostalgic album.

Dapperton is 24 years old and has made a big name for himself as an independent artist. Despite the fame he has reached at a young age, Dapperton was incredibly humble. He encouraged young aspiring artists not to allow doubt and anxiety to prevent them from pursuing their passion.

“Always believe in yourself. I think people tend to not endure the inconveniences of trying something new because of anxiety and fear of failing or whatever, and I think the reward is always greater than the risk,” Dapperton said. “I feel like I wasn’t a naturally gifted musician; I just did it because I wanted to be a musician, and I think it’s important for everyone to just follow their dreams.”

Dapperton said he began releasing music as soon as he started making it, trusting himself and the process.

Dapperton performs in Atlanta next on Sept. 18, which marks exactly one year since the release of “ORCA.”

While Lollapalooza is all about the music, the local Chicago food vendors that line Columbus Drive in “Chow Town” are a mouth-watering accompaniment.

Festival attendee Maryn Johnson, who was standing with her friends by the photogenic “Perry” sign, a tribute to Lollapalooza founder Perry Farrell, said the fest has many good food options and having it all in one place is ideal. Johnson had the tenderizer grilled cheese from Cheesie’s and described it as “life-changing.”

Further north on the grounds, a friend group lounged in the grass under the trees bordering Columbus Drive and Ida B. Wells Drive, fueling up with ramen from Table to Stix Ramen in Evanston. Festivalgoer Jane Wilke said she and her friends have also eaten at Connie’s and Wow Bao so far.

Both groups had a lot to say about the recent DaBaby controversy surrounding the rapper’s  homophobic comments and misinformation about HIV and AIDS at his Rolling Loud performance in Miami July 25. DaBaby is scheduled to close Lollapalooza at the Bud Light Seltzer Stage this Sunday at 9 p.m.

“Before, I was excited to see him perform … it just happened last week, and it’s definitely going to be a very apology-centered thing, and it’s going to be totally fake,” Johnson said.

Fans and other musical artists such as Elton John, Dua Lipa and Madonna criticized DaBaby and various brands and sponsors have cut ties with him.

The artist posted an Instagram Live defending his comments and received support from rapper T.I.

“I think it’s so disappointing to see a figure like that with such a big platform say such hateful, harmful, violent stuff, especially now,” Wilke said. “And then him trying to defend himself and T.I jumping in … I’m like, you’re all embarrassing.”

“It was completely out of line; he was trying to hype up the crowd, apparently, and it was a terrible way,” Young said.

Wilke said more sexual education is needed, and it is “violent” of Lollapalooza to allow him to still perform. The group agreed they no longer plan to attend his concert.

Johnson’s friend Maddie Gunderson said their group may stop by the DaBaby concert “just to see what he is going to say.” They anticipate it will be an attempt at redemption with DaBaby issuing a forced apology.

One of their friends said that at a certain point, they separate the artist from the music, while Johnson and her friend Kelsey Reece strongly disagreed. This topic of discussion was recently highlighted in a gallery at Columbia’s Student Center in April called “Does the Art Excuse the Accused?”

Johnson said she is unable to separate the artist from their work, especially having queer friends, and Reece, as a member of the LGBTQ+ community, agreed.

Their friend Viv Badynee brought up the Lollapalooza logo, which is a rainbow, and said their brand is presented as “all-inclusive.”

“It makes the safe environment they’re claiming to have dangerous,” Badynee said.

Rolling Stone reported DaBaby’s removal from the 2021 Parklife lineup, a U.K. music festival on September 11 and 12, but he is still expected at Lollapalooza this Sunday.