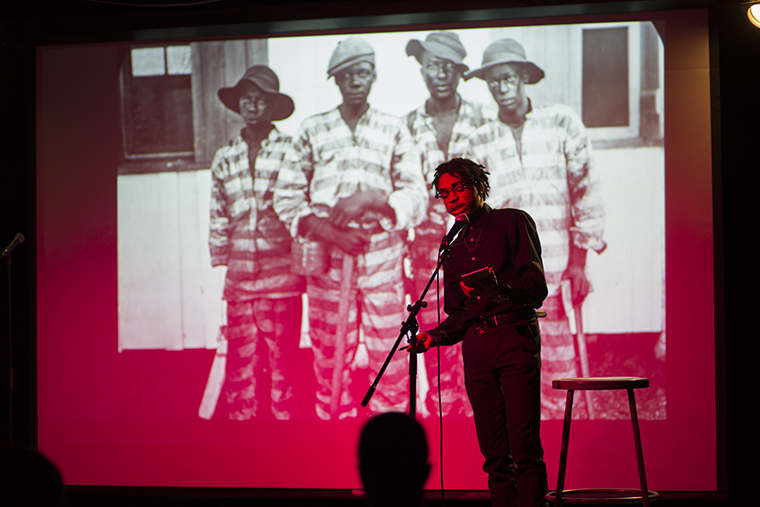 A man sat proudly in front of his computer illustration of a black man wearing a “Punk” T-shirt; another student talks with admiration about the triumph of black theatre in the late 1960s; and others read poems about mass incarceration. These readings, conversations, dances and music were the artistic soul of the 2nd Annual Black Arts Festival.

The African Diaspora artists gathered in the 623 S. Wabash Ave. Building Feb. 21-23 to showcase their talents in a variety of disciplines, and call for an increase in representation of African-American art.

Sophomore graphic design major Jordan Snead-Matthews’ computer illustration titled “Purple Haze,” combines Eastern animation styles and his own sketchy flare. He chose to showcase the illustration because it was on-theme and an accurate representation of his current works.

Snead-Matthews said it is important that Columbia provides more African-African inclusive events like the festival.

“We don’t get much exposure, so it’s nice to have an event that’s [for] all of us at once,” said Snead-Matthews. “It can feel overwhelming to be the sole African-American kid in class.”

The school could work on everyday inclusion for black students in classrooms, Snead-Matthews said.

The weekend event showcased a multitude of mediums including: film, dance, music, design, painting, spoken word and other disciplines.

Freshman television executive producing and entrepreneurship major Marcus Sampson presented his academic paper about African-American actor and director Robert Macbeth at the festival. Sampson was inspired by Macbeth’s revolutionary approach to black theatre that “makes people think.” Macbeth was the founder of the New Lafayette Theatre in Harlem.

“I came from Texas, so I have met more black people here than I have in my entire life,” Sampson said. “Columbia is a really cool place to just be a person.”

While Sampson was excited about meeting other black students, he added that he is one of two black students in his class “Topics in Art History: Black Artistry and the Archive.”

Co-organizer and senior arts management major Ry Douglas said the festival was a celebration of African-American art and a safe place to discuss differing views on blackness.

Douglas was the social media volunteer at the festival last year and was inspired by co-founders and Columbia alumni Alivia Blade and Bri Heath.

She said it has been difficult to maintain Blade and Heath’s vision with a smaller team and without the oversight of the founders, who put on the inaugural festival last year.

Douglas was especially excited about the Feb. 23 panel titled “Black Fluidity” that featured poetry and a playwright—who is also a drag queen and vocalist.