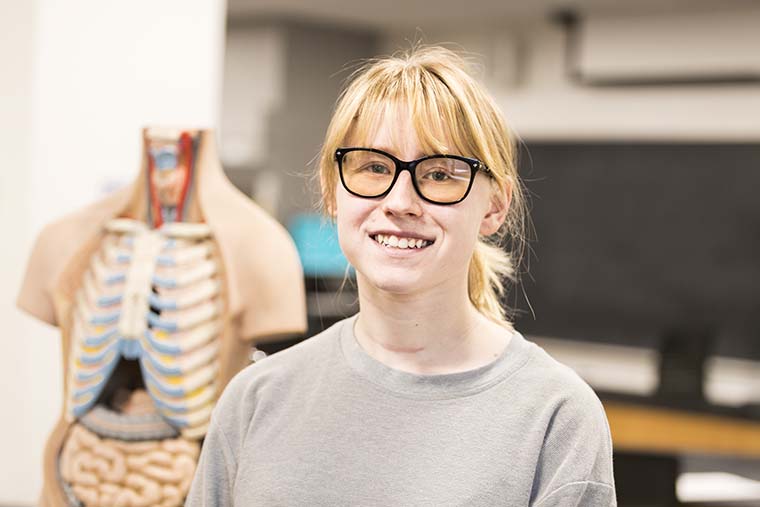 Arlene Vecchi, animation major and minor in biology, talks about her transition combiing her love for animation and biology to her career in medical animations.

After Mee Na Feng’s classmate at Loyola University Chicago found out about Feng’s background in fiction writing at Columbia, she told Feng it did not make sense for her to be good at both writing and science.

Feng graduated from Columbia in 2015 with a major in fiction writing and a double minor in American Sign Language studies and biology. Upon graduation, Feng decided to continue in science and pursue a second bachelor’s in neuroscience from Loyola. Feng plans to attend the University of Illinois at Chicago for a Ph.D. in learning sciences.

“For me, neuroscience isn’t super different from writing,” Feng said. “I’ve always been interested in people—how we feel, how we behave and what we do. Neuroscience is the exact same thing, but it’s a quantification of that.”

Since its 2013 introduction, 19 students have graduated with a biology minor, and an additional 25 are currently in progress, according to Julie Minbiole, associate professor and coordinator of the biology minor.

Feng realized after taking the “Cancer Biology” course at Columbia that she only needed a few more classes to complete the biology minor. She had no initial intentions of going into medicine.

During her time at Columbia, Feng worked with Victoria Can, an assistant professor of instruction in the Science and Mathematics Department, on an independent experiment study where they determined if people had specific genes in their DNA.

Can has helped multiple students with independent research projects and continues to be a resource for students interested in science.

Elizabeth Moss graduated in 2014 with a degree in illustration and a minor in biology. During their freshman year, Moss also chose to do an independent study with Can on antibiotic resistance.

Moss presented the research in the fall of 2013 at the Argonne National Laboratory with Can and continued to work on the project until the summer after their graduation.

“That was interesting, especially when they found out I was an illustration major,” Moss said.

Moss graduated from the biomedical visualization master’s program at UIC in 2018 and now does freelance work.

Moss said science and art can work together, which was reaffirmed in graduate school when they noticed pre-med and biology students using diagrams and pictures as a form of studying.

“Little moments like that make you realize that trying to separate the arts and the sciences isn’t a good idea,” Moss said. “You might as well try to take the best from both of them.”

After her freshman year, Pardieck switched her major from journalism to illustration when she noticed she spent most of her free

time drawing.  Pardieck spoke with faculty about how to combine science with drawing.

Pardieck plans to take a year off after graduation, based on advice from professors and people who have been through UIC’s biomedical visualization master’s program, to save money and prepare for applications to masters programs.

Both Pardieck and Arlene Vecchi, a junior animation major and biology minor, have been speaking with Moss for advice on what to expect when applying to UIC’s biomedical visualization master’s program.

Vecchi knew coming into Columbia that she wanted to do something with science and animation. Finding out about UIC’s biomedical visualization master’s program was eye opening, Vecchi said.

“I feel like this is the right path for me,” Vecchi said.

Evan Huttner, junior audio design and production major and biology minor, is currently in Can’s class and will be taking the medical school entrance exam next month.

Huttner wants to be a neurosurgeon once he completes his doctorate.

“I’ve always been very tactile. I like working with my hands, and that’s one thing I really enjoyed about audio engineering,” Huttner said. “I feel like surgery is a cool blend of that too.”

All three students—Pardieck, Vecchi and Huttner—plan to take or are already taking extra science courses outside of Columbia to help supplement their minors, but are happy with their decision to pursue both art and science at Columbia.

“I don’t think going to art school really matters if you love science and you love art, and [if] you’re able to do both then you should do both,” Vecchi said. “You shouldn’t feel bad for what anybody says [about] where you went.”