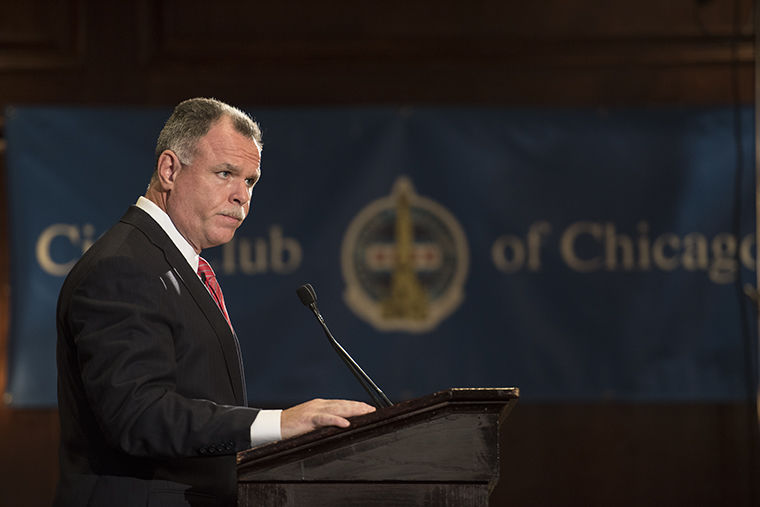 Former Chicago Police Department Superintendent Garry McCarthy told the attendees of a City Club of Chicago forum Sept. 19, that Mayor Rahm Emanuel made him a scapegoat for his political failures.

McCarthy, who was fired from his position after the November 2015 release of the video showing Laquan McDonald being shot and killed by CPD officer Jason Van Dyke, held an open forum discussion on problematic issues, including the McDonald case. During the talk, he said he was not part of that investigation.

“Politically speaking, you’re either on the bus or under it,” McCarthy said.

At the open panel, McCarthy gave a presentation titled “Legitimizing Non-Compliance in America” in which he criticized the hostility toward police prevalent today.

McCarthy said the shootings of McDonald, Eric Garner and Michael Brown could have been prevented. He added that accountability and discipline need to be enforced whenever police misconduct occurs and crime needs greater attention.

McCarthy said police are the subject of discussions of undue force and brutality but are not involved in them. He added that he reached out to activist groups, such as Black Lives Matter, after an appearance on a CNN Town Hall but has  yet to receive a response from their members.

Marian Perkins, a criminal justice professor at Chicago State University, said both the community and police need to be held accountable for their actions. She said it is important that all community members be included in the conversations on accountability.

Damon Williams, co-founder of the #LetUsBreathe Collective, an activist group seeking police accountability, said he thinks McCarthy is lying about his open invitations and finds his rhetoric about black communities offensive.

Williams said a dialogue with McCarthy would not be productive because of his biased view toward the black community. He said McCarthy’s language uses inherently racist words, such as “thug” and “gangbanger.”

“I have no interest in having a conversation with Garry McCarthy,” Williams said.

McCarthy said community leaders are encouraging people not to comply with the police, and it is a problem no one has the courage to talk about.

“Noncompliance is becoming legitimized across this country,” McCarthy said.

Perkins said she thinks the community is hurting and willing to comply because they want the issues between them and law enforcement solved.

“People want to be heard and are willing to listen to police officers,” Perkins said.

Williams said McCarthy’s discussion of noncompliance with law enforcement is a ploy to disguise the political, economic, social and law enforcement attitudes toward the black community.

In today’s environment, police officers are hesitant and afraid of being unjustifiably accused of misconduct, McCarthy said.

Williams said that Mcarthy’s comments frustate him, “How can you be afraid of getting in trouble if you are in the right?” he said.