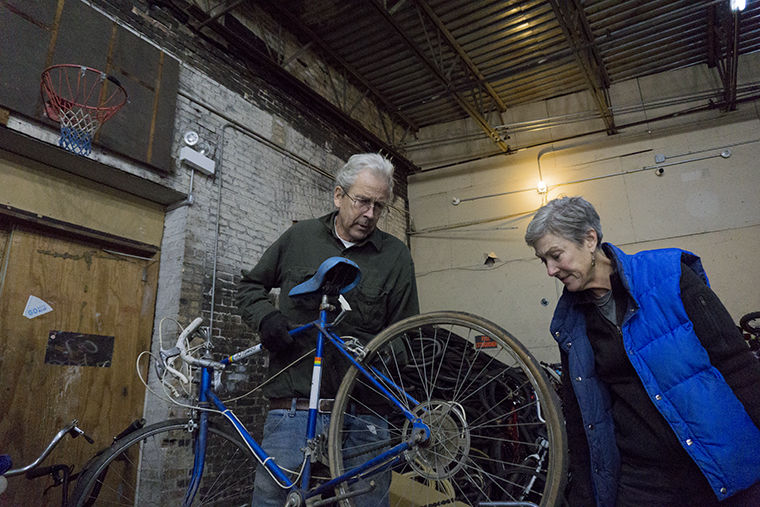 Amy Little and Lee Ravenscroft started Working Bikes in 1999, a nonprofit dedicated to recycling bicycles as well as supporting culture and both international and local bicycle projects. The married couple and 30-year Chicago residents think bicycles provide mobility and opportunity to citizens of impoverished countries.

Since its inception, Working Bikes, 2434 S. Western Ave., has redistributed more than 50,000 bikes worldwide to South and Central America, Africa and Chicago. Little, the nonprofit’s vice president, spoke with The Chronicle about the inspiration she and Ravenscroft found in their humanitarian work and how the organization has evolved in the last 18 years.

THE CHRONICLE: What inspired you and your husband to start Working Bikes?

AMY LITTLE: We both had spent time in Central America. I was a Peace Corps volunteer, and he spent time in Nicaragua. We both knew that a lot of bikes were being thrown away [in the U.S.] that could be useful in Central America. So, we started collecting bicycles. Lee also saw a lot of bikes going to the junkyard being ground up and made into steel to be recycled, and he believed bikes could be used for a greater purpose than just steel. So we started going to the scrapyards, collecting bicycles and bringing them home. Before we knew it, we had a basement full of bicycles.

Of all the things that impoverished countries need, why did you see bicycles as a necessity?

We believe in bicycles for transportation. Bikes were being thrown away, and people were leaving bikes in alleys. We had tried donating sewing machines a few years earlier. Lee sent sewing machines to Nicaragua and we were involved in a project that sent carpentry equipment to Nicaragua as well, but bikes seemed much more useful as transportation. You don’t need to have any particular skill except knowing how to ride a bike.

Why is mobility so important in places like Nicaragua?

Of course people make less money in developing countries, if they make any formal money at all. As a Peace Corps volunteer, I walked 10 kilometers a day, and a bicycle would have gotten me places much quicker. Most people don’t live in an urban environment—they live in the country or outside of towns so transportation is a natural [necessity]. Bikes give you independence.

How does your bike charity work in Chicago differ from the international projects you do?

In Chicago, [we give bikes to] veterans, the homeless, refugee resettlements and kids. The difference is that we fix the bikes up with volunteers in our shop and then make sure the people getting the bikes are coming through a program with a social service agency or through a school. They request a bike, and we figure out what size they need, and it is tailored to the individual. Last year, we fixed up 1,500 bikes locally between children’s and adult bikes.

How has Chicago been as a place to cultivate your work?

How have you seen the impact of your work?

Our foundation president went to Uganda and brought back photos from women’s groups we have given bikes to in the last year. It brought tears to my eyes to see the photos of the women. I feel so strongly about women’s empowerment in developing countries and one of these women had formerly been a prostitute and now she is a bike mechanic. That is the most moving example of how it can empower life.

There are great local stories, but I feel particularly strongly about women as the key to world peace and development. All of these women learned to be bike mechanics, and they had a self-sufficient business to save enough money to import another shipment of bicycles. It is making them a living helping their community and keeping them out of prostitution.

How do bikes become a tool of civic engagement and empowerment?

It is a great place for people to come together as they are doing something mechanical and helping local Chicagoans. They are belonging to something bigger than them. It is a good ethos. The whole volunteer scene at Working Bikes is just great because they do it out of the goodness of their heart. What makes us a special nonprofit is we are self-funded, so we don’t need to solicit grants. We are not competing with other nonprofits to try to get scarce grant money. We are self-funded through selling bikes in our retail store. We sell about 1,000 a year, donate about 6,000 a year to developing countries and fix up about 1,500 bikes locally.

How has Working Bikes evolved since you started?

We have grown and now have employees and a volunteer system. We went from a tiny storefront in the basement of one of my apartment buildings to a 22,000 square foot warehouse. Because I do a little bit of real estate, I did not want to be caught in gentrification and have to move out of the building, so we were actually lucky enough to purchase the building where we are located in right now.