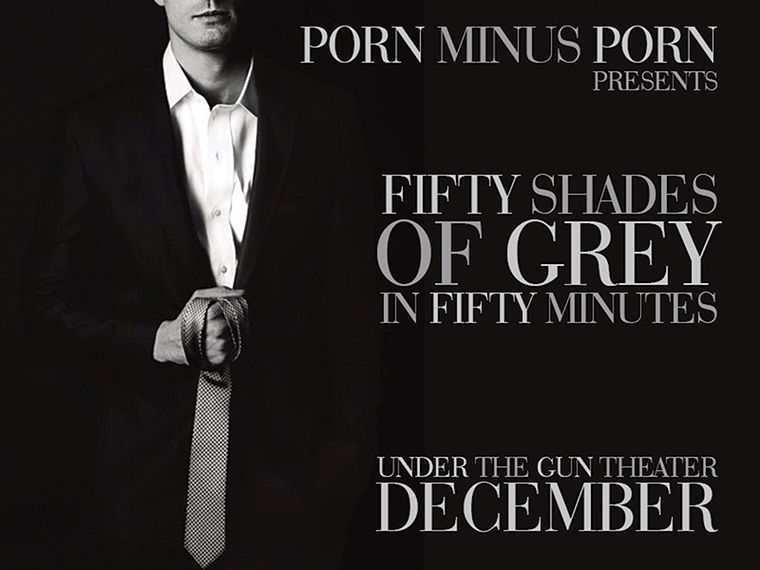 Courtesy Under the Gun Theater

“The ‘50 Shades’ show is a little break for [Bowman] to recharge before the longer run,” McMahon said. “It’s not as much work because it’s already been transcribed and packaged.”

Kevin Mullaney, artistic director of Under The Gun Theater, said the actors typically like to do these shows because they require no preparation, just cold readings of the scripts on stage.

“The actor is learning the ridiculousness of the line at the same time the audience is, so the fun is in part watching the actors realize how silly the thing they’re about to say is,” Mullaney said.

According to McMahon, the lineup for the show will rotate weekly as to ensure the actors remain unaware of the lines they will be reading.

“Another fun part of [the show] is not just the ludicrous dialogue, but [Bowman] reads the stage directions, and his interpretation of what’s happening on stage is hilarious,” Mullaney said. “A lot of the comedy comes from his descriptions of what’s happening.”

Bowman said he thinks the show will be successful and funny because removing the sex scenes in “Fifty Shades of Grey” makes it less sexy and more awkward.

“When you remove the context of people being naked or people having sex, the dialogue is completely nonsensical,” Bowman said. “There’s no reason this is romantic or enticing. When that’s brought to light by removing it from the really good-looking actors and the really beautiful sets and the supposed sexiness of the movie, it stands alone as what it is, which is just a bad work of art.”

Bowman said he asked all the actors not to read or watch “Fifty Shades of Grey,” so they have no idea what is going to happen.

McMahon and Bowman both explained there will be different forms of audience participation during the show like inviting an audience member to release a balloon whenever there is supposed to be a sex scene and voting on the awkwardness of the dialogue.

“We’re going to bring people on stage and give them some voting paddles, and they’ll be able to vote on whether the dialogue is sexy or creepy,” Bowman said. “I have a feeling we’re going to get a lot of creepy votes.”

“50 Shades of Grey in 50 Minutes” is scheduled to run at Under The Gun Theater the first three Fridays of December, and tickets are available at UnderTheGunTheater.com.