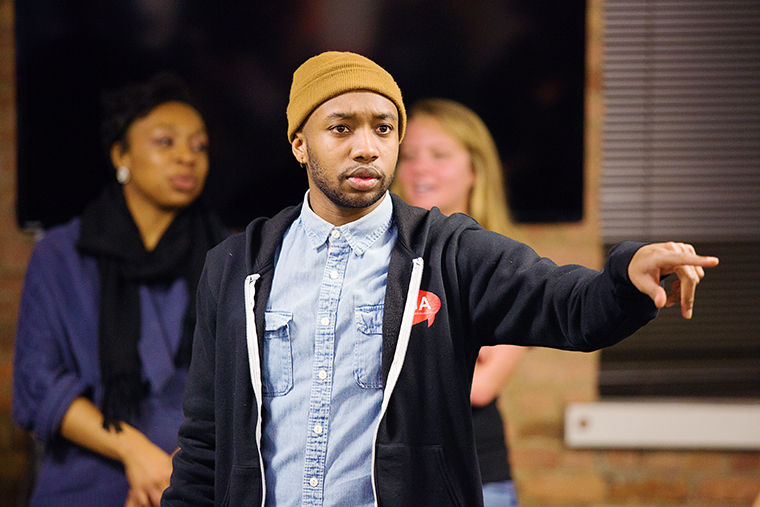 Luther Hughes, newly-elected SGA president and a senior creative writing major, encouraged students to join the association at the introductory social on Jan. 26.

Students convened in The Loft at 916 S. Wabash Ave. on Jan. 26 to meet the senators of Columbia’s Student Government Association and to learn more about SGA’s goals for the rest of the academic year.

“We want to make sure we are [involved] in the events, representing who we are and being accessible to the students,” Hughes said. “Last semester, we were so involved in restructuring [SGA] that we ended up losing focus of the [accessibility].”

Hughes said he wants to increase Columbia’s focus on diversity this semester.

“Diversity is a broad word we throw around,” Hughes said. “Making it more tangible and seeing more results in and outside of the classroom is a big thing to accomplish here at Columbia.”

Arissa Scott, SGA’s student representative to the college’s board of trustees and a senior fashion studies major, said the organization plans to return to Springfield, Illinois, in April to lobby for the Monetary Award Program Grant funding as the organization did the previous spring.

Scott said SGA aims to be more transparent about its actions because many students are unaware of them.

“We are very ready and focused to take on the new semester,” Scott said. “We want to host more events for everyone to mingle and get to know the entire Senate.”

“I want us to be approachable,” Kooda said. “We are students, too, and I hope people will get that this semester.”

“We want the students to get to know [SGA] as much as possible,” Hamrick said. “We are trying to hit a more personal [note] this semester with SGA and the rest of the students.”

Members also welcomed Kaela Ritter, SGA’s new vice president of finance and a junior business & entrepreneurship major, to the board during the first meeting.

“We are all on a common ground,” Ritter said. “I think that helps with both friendship and working together. We all have our hearts set on the same things, and it works out really well.”

Hughes said SGA is focused on students for the upcoming semester and he does not foresee any changes under his leadership.

“I think things will be more smooth, seamless and congruent,” Hughes said. “We are all pretty much gung-ho to accomplish our goals in a tangible way.”