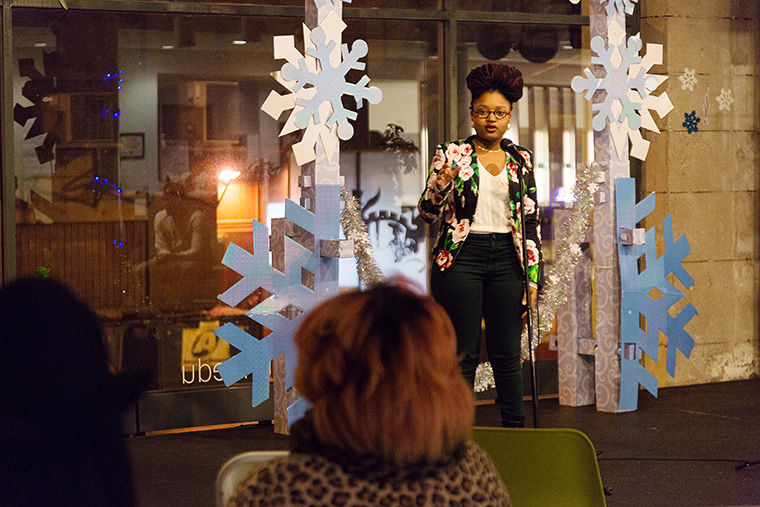 Students gathered for hot drinks, doughnuts and daring performances in the lobby of the Residence Center, 731 S. Plymouth Court, Jan. 21 for RL Cafe, an annual event in honor of Weeks of Welcome.

Jessica Coombs, coordinator of Residence Life + Community Development, said the event has been well-attended in previous years, so she wanted to continue providing events that serve as creative outlets for students.

“We are looking at continuing traditions but also creating new things,” Coombs said.

Coombs said students have responded positively to the events. She added that Residence Life is still brainstorming events for the current semester.

“We encourage [students] to get out into the city because there is so much around to experience,” Coombs said. “We really encourage our staff to take them out in the city and experience what is out there. [We are] also keeping things close to home to cater to all the different pieces.”

“Some people may be afraid to perform in larger crowds and this is more their speed for their first few performances,” Saunders said. “Additionally, there are people who come to things like this and like hearing original art in all forms.”

“I did not even know I liked performing until [my high school creative writing teacher] introduced it to me,” North said. “Ever since then, it has been my passion.”

North said she is used to small audiences like RL Cafe, but she thinks more people should attend campus events to display their art.

“It is always great for people to see other people do their art or express how they feel,” North said. “I like smaller audiences, but I also like bigger audiences because there is a diversity in the people and you get different responses from it.”

Perry said the performance was his first time participating in a Columbia event. He said although he wished more people attended, he liked the intimacy of the space.

“I feel as if it is a chance to meet new people, make new friends and show talent to other talented people, so maybe [people] can collaborate in the future,” Perry said.

Timika Young, a freshman theatre major, performed a stand-up piece about being bipolar and African-American.

Young said she did stand-up for the first time using a karaoke machine at a young age.

“I have more confidence [at Columbia],” Young said. “These are my people; they are not going to judge me. They are going to give me good criticism.”

“People see I am this full-of-life person who is bipolar and is not manic or ‘crazy,’” Young said. “I want to make people laugh, but also [become aware of] mental health issues.”