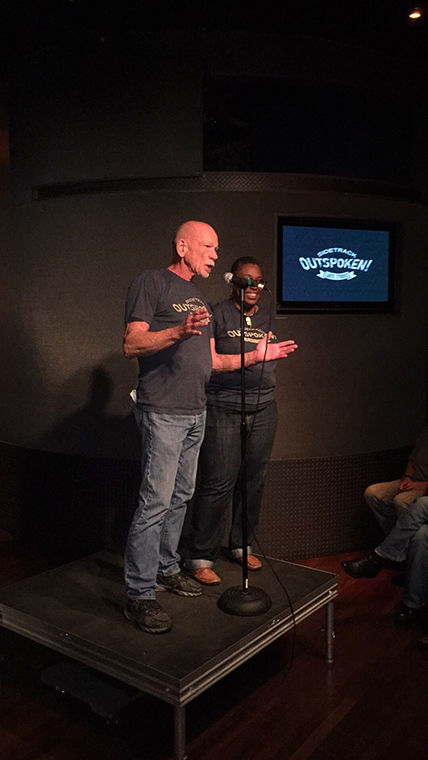 OUTspoken co-founder Art Johnston said he has been a gay activist since the ‘70s and has seen many amazing changes in that time.

“OUTspoken” is an LGBT storytelling night held at the Sidetrack bar, 3349 N. Halsted St., the first Tuesday of every month. Its most recent event was held Oct. 6.

The concept for the “OUTspoken” event series originated when curator David Fink convinced co-founder Art Johnston to go to a storytelling event, “This Much Is True,” with him.

“He’s a successful activist in the gay community and had a story I think is brilliant and should be heard,” Fink said.

After attending the event, Johnston said he was “absolutely blown away” by the stories he heard. He said he knew little about storytelling before the event, and wondered why there was no LGBT-specific storytelling event in Chicago.

since the beginning, he said.

“Middle of winter time, we don’t have a seat available—it’s amazing,” Johnston said.

The event’s audience is directly affected by Sidetrack’s location in the Boystown neighborhood in Lakeview, Johnston said.

“We’re located on the ultimate white gay boy part of the city,” Johnston said. “If we wanted to put together an excellent white gay boy storytelling event, we could do one a week, but that’s not going to benefit anybody over time.”

Instead, Fink said he makes diversity a key factor in choosing which storytellers perform in the events at “OUTspoken.”

“The general format for me is six storytellers: three male, three female, self-identified, and no more than two of each gender can be white,” Fink said.

Johnston said the community has responded well to the diverse audience and lineup the show hosts at each event.

“I’ve had two people say the evenings of “OUTspoken” at Sidetrack are the most diverse room they’ve been in—and that’s a hell of a compliment,” Johnston said.

Fink said the event gives a voice to people who may not otherwise think they can be heard.

“I’ve had a number of people

fit in. We’re all outsiders in our own ways. You found the

Victor Salvo, executive director of The Legacy Project—a youth education program combating anti-gay bullying—performed Oct. 6 and said he has been to many “OUTspoken” events.

“People come away with a wide variety of perspectives on different types of problems. It really humanizes the individual experiences,” Salvo said.

Salvo, a long-term LGBT activist and Chicago native, said Chicago has a special relationship with storytelling.

“Chicago’s a really big community for storytelling—not just LGBT, but all kinds,” Salvo said. “There is something in the ethos about being a Chicagoan that is really steeped in history. I think it relates directly to the fact that the city was destroyed by a fire. That is why storytelling has become so important in Chicago—there’s something in the way Chicagoans relate to the concept of history and personal struggle.”

“Being gay is a huge part of who I am,” Richardson said. “I’m married to a woman. A lot of things I write about are absolutely informed by that—my relationships and my thoughts about life in general.”

Richardson said the story she told is about how her wife found her lost ring, lost it again and found it again in an incredible way.

“It’s one of these amazing stories I couldn’t believe, and whenever I tell the story to anyone they can’t believe it either,” Richardson said. “It’s like a real life miracle.”

Johnston said he believes in the ability and opportunity  storytelling  has to change negative  societal attitudes.