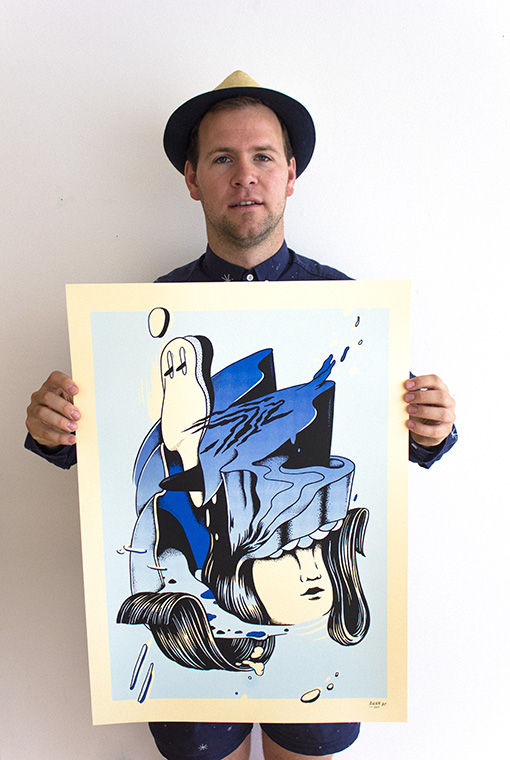 Jeroen Smeets, founder of The Jaunt, posing with portrait piece being displayed at the Vertical Gallery.

Artists seeking inspiration from abroad who want to travel for free can now do so through a newly launched art project called The Jaunt.

The project, founded in 2013 by Jeroen Smeets, the project’s travel planner and curator, sends artists to travel around the world and create art inspired by their experiences. The trips usually last five to six days and are financed by the art they inspire. So far, the project has sent 16 artists to 16 different locations.

“We announce a trip, we presale the prints, and with all the presales of the print we fund our next trip,” Smeets said.

He sells all the artists’ work before the trip, and the trusting customers get their print after it ends.

Smeets thought of the project idea after hearing other artists’ thoughts on getting inspired by travel. Some said they wished they could be more creative and learn through new experiences, and Smeets said he felt compelled to make that happen without paying for traveling expenses.

Smeets funded the project through Kickstarter because he wanted to keep the money in the art, rather than take money from government or commercial contributions. He said funding  The Jaunt’s first trip with Kickstarter worked well, and he has continued to use the crowd-sourcing site to fund later trips. He hopes this project can act as a catalyst for creativity and inspiration for the artists, and also serve as a place for them to further explore their artistic processes.

“I want them to bring home inspiration,” Smeets said. “I want the artists to have complete freedom.”

David Shillinglaw, the eighth artist of the project from the United Kingdom, went to Denmark in June 2014. The Jaunt took him to a secluded woodland beach where Shillinglaw did not have access to technology or much human interaction.  He said it was appealing because he needed to get a break from working in big cities like London and Amsterdam.

“I became a real hippie,” Shillinglaw said. “I painted on pebbles I found on the beach.”

He said the beach’s natural setting inspired him, and for the first time he created abstract work he was proud of. He said he is interested in abstract work but never felt confident enough to produce his own abstract type of art until the trip.

“I was in a position to do something new,” Shillinglaw said. “The piece of work I created was a real push for me toward an abstract space.”

Shillinglaw also said the trip helped him break his usual pattern and try something different with his work, going as far as to say it might have been his artistic peak so far in his life.

“I was able to create a lot out of very little,” Shillinglaw said. “Everything was reduced down to a pure, rich experience.”

The Jaunt has a current show at Vertical Gallery, 1016 N. Western Ave, in Ukrainian Village, which runs through Sept. 26 and showcases the culmination of the project and the final prints from the participating artists. It also descibes their traveling experiences in further detail, including Chicago-based artist Cody Hudson, who traveled to Mexico City at the end of July.

Patrick Hull, owner of Vertical Gallery, is happy to show these works because he thinks the project is innovative and new in the art world. The exhibition is a chance to show something new to the city.

“I had never heard of anything quite like it before,” Hull said, adding that the style fit well with his gallery, an urban contemporary space that blends street and modern art.

The Jaunt has an illustrative pop art style, and Smeets said he picks the artists who he feels best fit with the project and the style. Hull said it’s different for his gallery and he especially likes the unique story behind it—the fact that The Jaunt sells all of its unmade prints in advance is a novel idea to Hull.

“It’s nice having a lot of smaller works in the show,” Hull said. “It’s much more of an intimate show.”