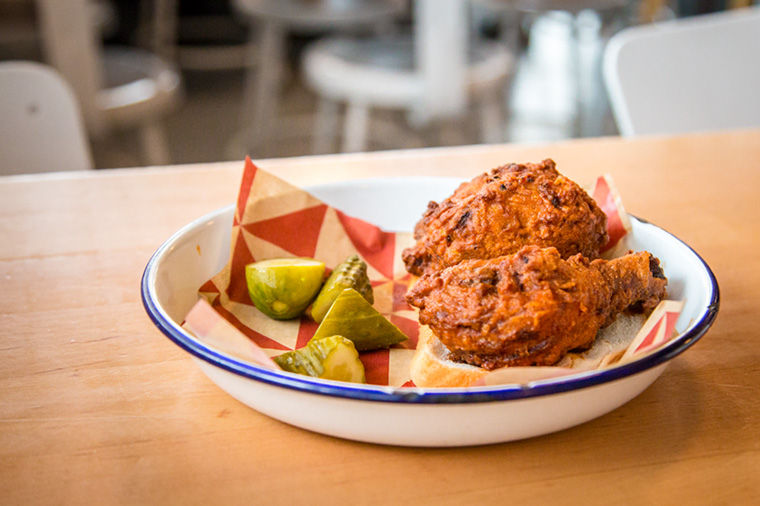 The Windy City has taken a page from the Music City, ordering up a serving of the Nashville Hot Chicken trend in Chicago.

Nashville Hot Chicken is the regional delicacy many Tennesseans have enjoyed for decades. Now, local favorites Parson’s Chicken and Fish, 2952 W. Armitage Ave., Leghorn Cafe, 600 N. LaSalle St., and Honey Butter Fried Chicken, 3361 N. Elston Ave., have caught on to the Southern staple, adding versions of the Nashville favorite to their menus.  It has even trickled down to KFC, which introduced its version in January.

While every restaurant has its unique take on the dish, most recipes call for brining chicken pieces in a hot pepper mixture. The chicken is then bathed in buttermilk or egg, rolled in a flour mixture and fried to perfection.

Hunter Moore, owner of Parson’s, came up with the idea for a Tuesday night Nashville Hot Chicken special more than two years ago. He said the dish was so popular, he decided to make it a regular menu item. However, the chicken was a staple of Parson’s menu months before Moore tried the real thing in person.

“When I came up with the recipes, I had not yet been to Nashville or even tasted authentic Nashville Hot Chicken,” Moore said. “It’d been on the menu a few months before I actually got to try it.”

The history of Prince’s Hot Chicken Shack, the originator of the Nashville Hot Chicken trend, inspired Sieger Bayer, former Leghorn chef, to create his own take on the recipe.

As the legend goes, the hot chicken recipe was developed in the 1930s when a girlfriend of Prince’s owner Thornton Prince added a hefty dose of spices to her fried chicken recipe to get back at her cheating boyfriend. The scheme backfired, and Prince loved the recipe so much that more than 80 years later, Hot Chicken has become a staple for courageous fried chicken fans passing through the Music City.

Prince’s is known for its painfully spicy chicken, but Chicago’s chicken chefs are focusing on flavor more than scorching heat.

“When I came up with the recipe, I wanted it to be something hotter than I would typically eat,” Moore said. “I wanted it to get people to break a sweat, but not so much that you’re like, ‘I’m in pain, and I can’t taste the rest of my food.’”

With the influx of newly-opened fried chicken shacks in Chicago in the last year, Bayer said chicken chefs were looking for a way to put their spin on a regional favorite.

“It came into Chicago at a time when [The Girl and the Goat’s] Stephanie Izard was going to open a chicken place and Honey Butter Fried Chicken opened up,” Bayer said. “It hit a nice niche with the hipsters and the chef world. It was a good time between fried chicken coming in and the Nashville version gaining popularity.”

“We’re mostly a town that’s interested in food as a whole, and if we hear about a food with huge popularity elsewhere, we’re totally interested,” Gleason said.

Bayer and Joe Scroggs, owner of The Roost, both grew up in the South—Bayer in Georgia and Scroggs in North Carolina. Gleason said she thinks the chicken trend is catching on in Chicago because of many of the chefs’ Southern roots. And with the Hot Chicken heating up, it is hard to disagree.

“There are Southern boys that miss their home cooking,” Gleason said. “They brought it here, and everyone seems to be interested.”