Someone You Should Know: Dewayne Sutton 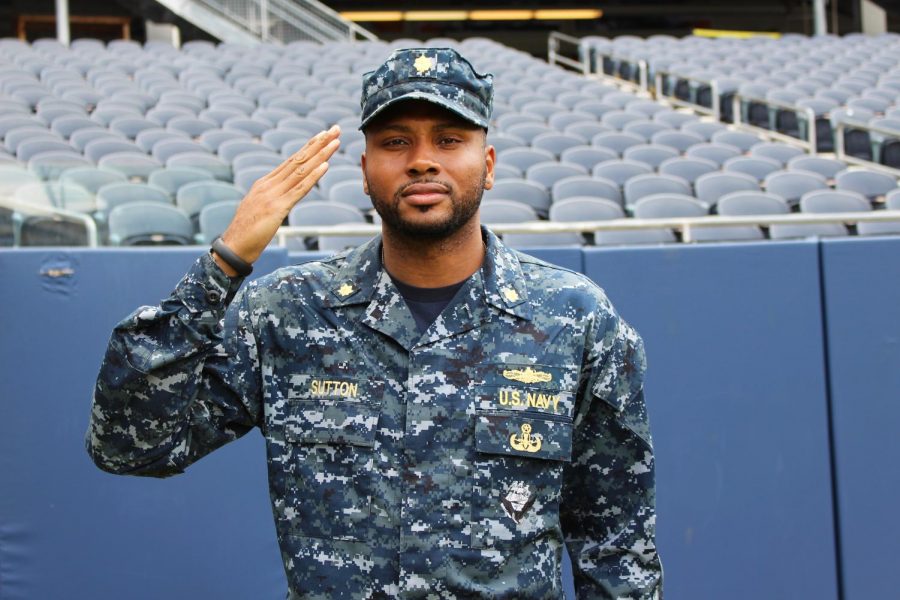 Dewayne Sutton salutes his country on the 10-yard line of the infamous Soldier Field.

Dewayne Sutton, 33, finished active duty in the U.S. Navy on Dec. 15, 2014. By Sept. 8, he enrolled at Columbia. Leaving the service with a couple injures and a long list of medals and other achievements, he is now readjusting to civilian life and focusing on his future.

Sutton, who received a Purple Heart, originally came to Columbia to pursue music; however, when he saw the other studies Columbia offers, he chose to major in education. Sutton said he intends to become a music teacher and “try to fix the broken school system that we have in [Chicago].”

Because of his age, he said it is strange being in a class of people many years younger.

“They are so young and curious with life and I’ve lived a very full life thus far,” Sutton said. He hopes through his studies and time at Columbia, he will pave a new career and life path as well as tell his miraculous story. Sutton spoke with The Chronicle about his time in the service and his next steps.

THE CHRONICLE: How did your journey with the Navy begin?

DEWAYNE SUTTON: I joined the U.S. Navy in 2005. [When] 9/11 happened and I felt a strong sense of country and duty and I wanted to serve. Originally, I joined the Navy to be a pilot. However, they told me I was too tall. The cut-off is 6’4 and I’m 6’6, so the next best thing for me was explosives technician, so I would essentially stop things from blowing up.

What medals and achievements did you acquire during your service?

How many tours did you do and where?

My first deployment was actually Hurricane Katrina, in a more “protect the base” sort of roll, but my first overseas deployment was Iraq. I did significant tours: two in Iraq—one for six months and one for eight—and two in Afghanistan—one for eight months and the last one was 18 months. I’ve done maybe 20–30 tours all over…I’ve been to Kuwait, The Horn of Africa, Panama, Guam, the Philippines, Qatar, Kazakhstan, China Brazil, Rome, Italy, Spain [and] I lived in Greece.

Out of the many places you visited on your tours, which did you enjoy the most or learn the most from their culture?

I have enjoyed Italy the most. The culture, the history, the architecture, the fashion—Rome is the most beautiful place I have ever seen.

What injuries did you sustain?

“I was shot twice; once in the lower rib [right side] with an AK-47 and once in my right forearm. I was in an explosion, as well…it’s listed as a “traumatic brain injury”. I was also diagnosed with PTSD.

Can you explain more about the explosion you were in?

“It was just another day on patrol, we were about 10 kilometers outside of the province of Farah, Afghanistan. I only remember a very loud thud and when I woke up, I was in a hospital with two gunshots. I survived but four of my friends weren’t so lucky.”

How is the recovery process and readjusting to civilian life going?

“I am recovering from my injuries very well. Lots of therapy and medication, but overall the recovery is not bad. I am adjusting to civilian life very well, also. A few things like driving get difficult at times, but overall the adjustment is going smoothly.”

Do you have to go back and if not, would you ever reenlist?

“I do not have to go back, no. I am transitioning from the reserve to completely out because now I’m disabled. Technically a “disabled veteran”, but…if I would do it all over again? Probably not.”

What is your thought on war, in a general sense?

“I think it is very pointless and we have loss way to many lives concerning ourselves with other countries. We have people starting [wars] right here in our own country. I’ve lost plenty of good friends trying to restore order in another country. Just this year alone we had 500 homicides right in our city. Why not try to restore order here?”

What’s the new plan now, for the future?

The new plan is to share my story because. I want to share my story and I want to educate and teach kids, in particular, how to grow and be productive people in society. Also, in the city of Chicago there is a shortage of positive black male role models and I just want to encourage someone, to inspire somebody to do something else and then I eventually want to get into politics. Possibly mayor, governor; I don’t know if I’m ready for a presidential run, but we’ll see.