Heliport to host tours despite skepticism 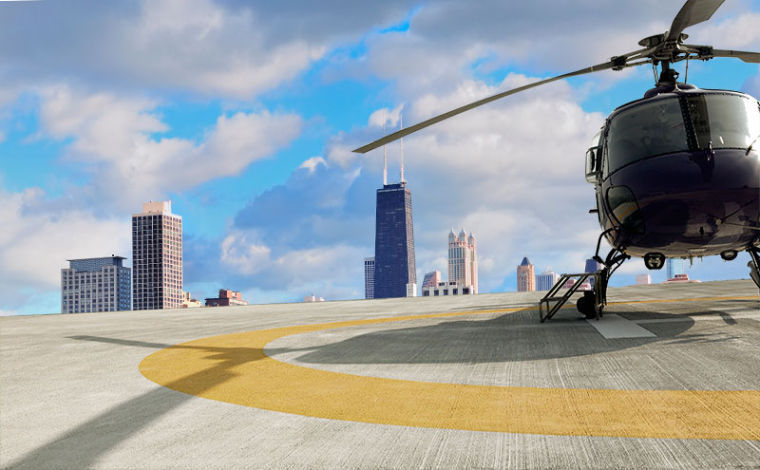 A heliport  will soon be stationed on a riverfront industrial space in the Bridgeport neighborhood to bring helicopter tours to the city despite community concern.

On April 2, the City Council approved a $12.5 million plan sponsored by Alderman James Balcer (11th Ward) to build a heliport for helicopter skyline tours on the 2400 block of South Halsted Street to boost tourism and uplift the local economy.

“I believe it will spur business along Archer Avenue and Halsted Street,” Balcer said. “I’m looking at people coming in visiting our restaurants, visiting our ward. I’m positive it will have a good economic impact on the ward and the city.”

Chicago Helicopter Express is building a heliport on 4.6 acres of industrial land on the southern portion of the Chicago River along the border of Bridgeport and Pilsen, according to the CHE heliport mission statement.

Skyline helicopter tours will take place 15–20 times a day and the helipad is expected to create 50 jobs, according to the statement.

Trevor Heffernan, CEO of CHE, said the Federal Aviation Administration, the Illinois Department of Transportation and the City Council collaborated on the plan.

“We have isolated a location that is ideal for a heliport,” Heffernan said. “It’s got a clean flight path, isolation from communities and it’s located in an industrial corridor. It was an effort that involved several governing entities and local communities to finally come to a decision on the safest and most accessible heliport location.”

“We would like to have seen an actual agreement between the community and the company before this went further,” Paquin said. “We didn’t get that.”

“[Heffernan], in my opinion, has spoken to everyone,” Balcer said. “There were flyers, outreach and community meetings. I have a binder in front of me [with names of] people who have supported, and quite honestly, there have been people who have opposed it. We have tried to listen to everyone.”

According to the PERRO website, after CHE did not respond to PERRO’s request to postpone its public hearing until May, PERRO urged Bridgeport and Pilsen residents to attend the Chicago Plan Commission meeting on March 20 to voice their concerns about the heliport.

The Bridgeport Alliance and PERRO will hold a community meeting April 29 to give residents a chance to address the heliport plans, according to an April 11 PERRO event post.

“We understand that this meeting is mostly symbolic,” Paquin said. “There is very little that can be done at this point.”

Alderman Timothy Cullerton (38th Ward) said he spoke with Balcer about noise complaints and safety and is confident that CHE addressed residents’ concerns and the helipad will ultimately benefit the community.

“I think the first thing you’d question is the fact of noise,” Cullerton said. “It will be an asset to the area and bring some jobs. A lot of the residents and businesses in the area testified in favor of this heliport.”

CHE has taken several precautions it says will ensure noise is not a problem for neighboring  communities. The quietest helicopters on the market will be used for all tours. They will take off and land vertically to reduce noise and will fly over the Stevenson Expressway, which runs through the northern edge of Bridgeport, out to the lakefront to avoid flying over homes, according to the CHE mission statement. A sound barrier will be constructed to absorb additional noise from operations.

Alderman Margaret Laurino (39th Ward) is among the majority of aldermen who support Balcer after inquiring about his research of the plan, process and safety precautions, said Manuel Galvan, press secretary for Laurino’s office.

CHE is currently headquartered in Wheeling, Ill. and will move to Chicago after the heliport has been constructed, Heffernan said.