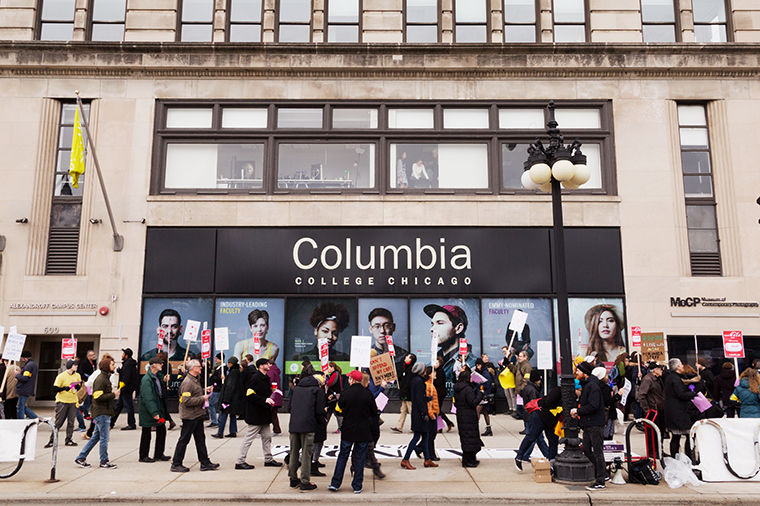 Eric Koppen, a repair technician in the Cinema Art + Science Department, commutes two-and-a-half hours by train to work every day from his home in Sandwich, Illinois. Because he cannot afford a car, Koppen must rely on carpools to the suburbs to then take the train into the city.

Koppen, who also teaches part-time at the college for extra money, is also working as a technician at another institution and takes freelance work during the summer to make ends meet.

Koppen was hired as a full-time staff member in 2007 after graduating from the then-Film and Video Program. At the time, he lived in Naperville, Illinois, but then moved to Aurora, Illinois, and finally to Sandwich—further away from the city each time—to find less expensive housing.

“With my paycheck not increasing to match any [inflation], I’ve had to keep moving out so I could keep continuing to afford rent, utilities, food [and] stuff like that,” he said.

Koppen said the college’s staff union members have not received a cost-of-living adjustment since 2012 while negotiating under a renewed contract from 2010, creating challenges for staff members collegewide. A new contract has not been signed since the union has been bargaining for a COLA.

Due to hikes in taxes and dues, Koppen said the money he keeps after everything comes out of his paycheck is equivalent to $100 less than he made when he began working at Columbia eight years ago.

“Cost of living raises haven’t kept up with raises in taxes and things like that. That is on top of the costs of everything else increasing,” he said.

Koppen is one of many staff members who say they are affected by a lack of significant raises and are bargaining for a 5 percent COLA in their new contract.

Participants in the rally walked in a circle screaming chants, including ‘hey, hey, ho, ho, where did all the money go?’ all while with holding signs and using noisemakers to bring attention to their efforts for a COLA.

In their previous efforts before the rally, members of United Staff of Columbia College placed soda cans and signs throughout campus buildings clad with the phrase “COLA.” US of CC members also gained signatures for their petition by standing in Columbia buildings in the days leading up to the rally.

Tanya Harasym, coordinator of operations at the Learning Studio and Communications Chair for US of CC, said a rally was the “natural next step” in raising awareness of the issue.

“A lot of people in the membership were ready to take some kind of action,” Harasym said. “They are sick of talking about it [and] negotiating back and forth, which has been going on for about three years with not much to speak for. We want to do something a little more loud, a little more out there.”

Nick Hoeppner, president of the US of CC and an engineer in the Radio Department, said COLA is one of the union’s most prominent  bargaining issues.

Dan McCallum, coordinator of the Intermediate Equipment Facility and a US of CC member, said he hopes demonstrations like the COLA rally will gain student and faculty attention and support.

McCallum, who has worked at the college as a student and a part-time staff member since 2008 before becoming full time in 2012, said current salary issues with staff could deter people from wanting to become full-time staff members. He added that because of inflation, he is essentially making $1,100 less annually than when he began, but his monthly bills are nearly $1,000 more than they once were due to higher cost of living, increased Metra fares and student loans for him and his wife.

“The college is going to see it at some point as a brain drain,” he said. “People that have been here for many years that have experience teaching, working with students and know their facilities really well are going to go to DePaul [University], Northwestern [University] or somewhere completely different just so they can get better pay.”

During the rally, Hoeppner; JeeYeun Lee, development and communications director for the Center for Community Arts Partnerships and secretary of US of CC’s bargaining team; and Mary Badger, the union’s negotiations chair and director of Theater Facilities in the Theatre Department, visited the college’s administrative offices and delivered boxes of signed petitions demanding a COLA to Michelle Gates, vice president of Business Affairs and CFO, who praised the union leaders for their “professional” approach to discussions and their “humor” with the COLA cans around campus and said the college was working on an offer for the union. There were more than 750 signatures in support of the union, Lee said at the rally.

“[Columbia] is committed to ensuring a long-term, positive and healthy work environment for all employees, which includes faculty and staff, non-union and union,” college spokeswoman  Cara Birch said in a statement. “We continue to align resources with institutional priorities, and in that context, we continue to negotiate at the bargaining table and are confident we can reach a fair agreement with US of CC.”

The union will meet Dec. 18 with the college, which will present a contract counterproposal to the union, Hoeppner said.

“I personally doubt they can meet our offer,” Lee said to staff at the rally regarding how she feels about the counterproposal. “Let’s not let the [winter] break [throw off] our momentum.”

Hoeppner said after he receives the counter proposal, the union will see what is or is not included and make plans accordingly.

While a COLA is the largest issue pressing collegewide staff members right now, Hoeppner said staff are bargaining over other issues as well, including the union’s refusal to accept the merit-based pay system favored by the college administration and ensuring job security.

“I’m encouraged that we meet regularly,” he said. “It sounds like our concerns are being heard, if not presented to people inside the administration that can act on them, be it making counter proposals, accepting them [or] maybe unfortunately rejecting them.”

The college also commissioned a job classification study for the staff, which is meant to clarify the rationale behind staff compensation. Though originally set to be completed in June, Hoeppner said the study was extended to December and added that he was not told when the study would be completed this month.

Though disappointed in the delay, Hoeppner said he is still pleased the college remains committed to completing the study.

Koppen said he thinks other staff issues that come out of trying to negotiate a contract could also escalate to the level of COLA.

“I don’t think the administration realizes how much we do,” he said. “There are some of us that feel ignored or unheard, and these things will just continue to escalate until we do feel heard—until we get administration saying, ‘This is a big issue and you are working hard. You do deserve it.’ Until that happens, we have to keep going until we do get some type of response.”