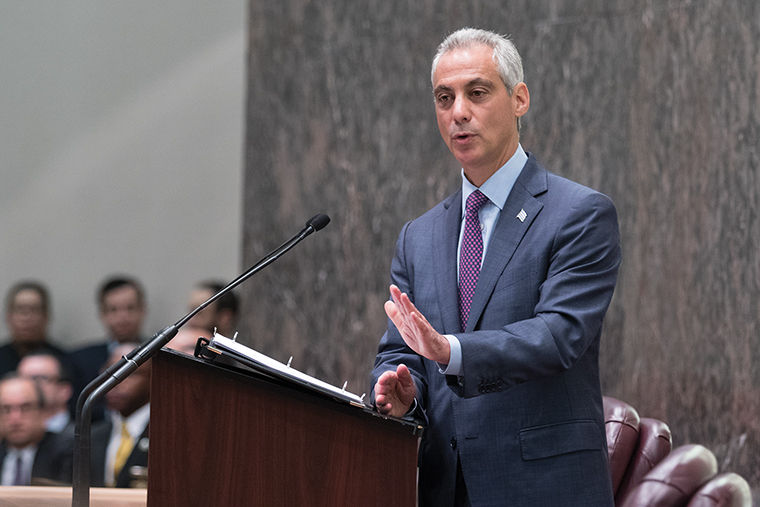 We must “meet our obligation to police and firefighters who answer our every call,” Mayor  Emanuel  told aldermen on Sept. 22.

Mayor Rahm Emanuel presented his 2016 budget proposal to the City Council on Sept. 22, unveiling a record proposed property tax hike, a new monthly garbage collection fee of $9.50 and what he claims are $170 million in savings and reforms.

The budget, which will be voted on by the City Council in the next two months should eliminate the city’s debt, Emanuel said.

According to Emanuel, the proposed property tax would bring  in roughly $544 million by 2018 and would only affect properties valued at more than $250,000. The central business district and commercial area would  contribute one out of every four dollars of the property tax increase, and the tax would help pay for police and firefighters’

“Raising city property taxes is a last resort,” Emanuel said. “It is why we never increased them in my last four city budgets, but we must solve our pension challenge and there are only two options: We can make the damaging cuts that I spelled out and undermine all of the hard work and progress that we made, or we can raise property taxes to meet our obligation to police and firefighters who answer our every call.”

Despite cries of disapproval from residents  at Emanuel’s open budget forums Aug. 31 through Sept. 3, the mayor announced plans to charge residents a $9.50 monthly fee for garbage pickup, adding that half of the city’s residents already pay up to $16 a month for the service.

“I understand this is new, but it is necessary to provide the level of services that Chicagoans depend on,” Emanuel said.

Alderman Pat Dowell (3rd Ward) said she thinks the mayor has effectively reduced the city’s structural debt, but she disagrees with the monthly garbage pickup fee.

“Garbage collection is an essential city service, and I actually would like to see the mayor find another way to raise the $62 million the tax would generate,” Dowell said.

South Loop resident Jeffery Ayersman said he thinks the mayor is too concerned with increasing taxes instead of cutting spending. Residents at the budget forums suggested that city officials take a pay cut or the mayor cut unnecessary jobs.

At the Sept. 24 City Council meeting, aldermen presented their ideas on how to cut costs.

“This budget will protect the retirement security of the men and women who protect us, but without further burdening Chicagoans who can least afford it. It is the fairest, most equitable and most progressive way to save pensions and keep our economy strong while asking those who can best afford it to do their part,” Emanuel said.

“While this is happening in cities nationwide, it is unacceptable here in Chicago and it must be addressed,” Emanuel said.

The mayor also plans to tax electronic cigarettes, which he said could generate more than $1 million in revenue.

“Along with this city budget, we propose to start levying the special property tax for school modernization—to bring thousands of Chicago’s students out of the closets and into the daylight,” Emanuel said. “Once this levy is enacted, it will enable us to end school overcrowding in Chicago in the coming years. It will also enable us to finish the job in making sure that every classroom in every school in every neighborhood is fully air conditioned—something the city has debated since 1963.”

The budget also allots $2 million for transforming CPS school-based clinics into health clinics in the next four years.

Nowhere does the budget list funding for special education, a recurring topic at the Sept. 3 open forum regarding the budget.

Sarah Chambers, a special education teacher for CPS, attended the open forums to advocate for her students’ rights to special

“It’s outrageous [Emanuel] held these budget meetings and didn’t listen to any of the residents of Chicago,” Chambers said.

Chambers said special education funding has been cut because it is expensive, and the city is looking to cut costs.

She said if her school does not get the special education teachers it needs in the next month, she predicts many parents will

Chambers said she plans to attend the Board of Education meeting Sept. 29 along with many parents and students to express concerns about lack of funding.

“We hope our voices will be heard, but if not we will need to take other measures,” Chambers said.