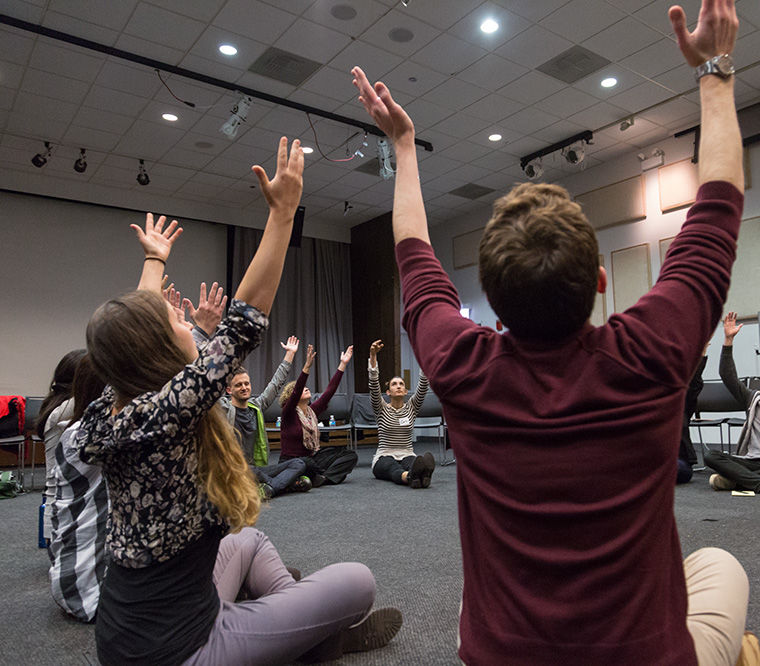 Attendees of the "Healing After Violence" panel participated in group healing activities, including a person acting out a movement about something they wish they would have said at any time in their life and the rest of the group copying the movement afterwards.

They are practicing yoga, mirroring each other’s gestures and passing imaginary objects to one another–but mostly they are trying to heal.

Students and members of therapy organizations joined a movement therapy workshop, Healing After Violence, hosted by the Masters Organization Volunteering & Educating in Dance/Movement Therapy and the Chicago Albert Schweitzer Fellowship.

The Oct. 26 workshop, held at Stage Two auditorium in the 618 S. Michigan Ave. Building, educated attendees on methods of dance movement therapy and how it can be used to treat people who suffer from violence-induced trauma.

“Movement doesn’t lie and movement often gets me to a much deeper connection than words,” said Rosey Puloka, a speaker at the workshop. “Trauma is pervasive, it affects every community, population, age group, gender and size. Trauma lives in the body and using movement is a way to meet trauma in the body and then use the body as a resource.”

Puloka received a master’s degree in dance/therapy and counseling from Columbia’s Creative Art Therapies Department in 2016 and works as a dance movement therapist and clinician at Cook County Sheriff’s Women’s Justice Program.

Lauren Milburn, M.O.V.E.D. president and a second year graduate student in the Creative Arts Therapies Department, said she invited Puloka to speak at the event because of her experience communicating with people who have been affected by trauma within the prison system.

“Helping people to access the body as a resource for dealing with the traumas they encounter from violence is just an incredible thing,” Milburn said. “It’s your body, so it’s not like you have to go somewhere else to get it because you carry it with you all the time.”

Three other panelists—Robbin Carroll, Quentin Mables and Deanna Parrish—who represent various movement therapy backgrounds, joined Puloka in leading the workshop. Carroll is the founder and president of the nonprofit organization I Grow Chicago, which uses yoga, creative expression and mentorship to strengthen communities, and Mables is the co-executive of the same organization. Parrish is a fellow of the Center of Conflict Resolution, a nonprofit group that offers communities mediation services in moments of dispute.

The program was divided into a Q&A with the speakers, a small group session and a recap of what the audience took away from the event.

Sarah Wiltgen, a graduate student in the Creative Arts Therapies Department, said she enjoyed seeing people unfamiliar with dance movement therapy participate in the small group portion of the workshop.

“It was new for me to see a group of individuals who I had never met, and who had never met each other, doing dance movement therapy and connecting though gestures,” Wiltgen said.

The body and connections made with other people are two tools that are helpful in recovery, according to Puloka.

“Oftentimes, violence occurs because someone didn’t have another outlet or didn’t know they had another outlet, to get out whatever was making them all riled up,” Puloka said. “A lot of violence in jail can be avoided by allowing someone to express themselves through their movement in a way that makes them feel better and is also safe for them and other people. There is also a lot of safety in movement.”