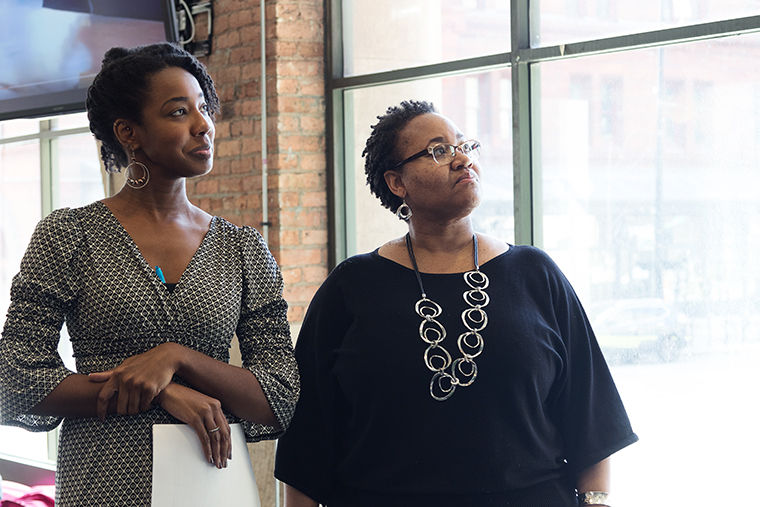 The office of Student Health and support created a stronger conversation about mental health with the Feb. 23 session on suicide awareness and prevention.

A Feb. 23 suicide awareness session garnered scant attendance from students, faculty and staff, but the Office of Student Health and Support is working to create new methods to raise awareness about suicide prevention.

While only three students attended the Suicide Prevention with Counseling Services event hosted Feb. 23 by SHS and Counseling Services in the lobby of the Residence Center, 731 S. Plymouth Court,E. Cordelia Miller Muhammad, the director of Counseling Services, said SHS is collaborating with other student servicesdepartments to create events for Suicide Awareness Month in September 2016 and foster better involvement across campus.

“We can come up with more of a campaign [strategy] that will have us talking about it more in other areas of the campus and making it a topic students will be more comfortable thinking about,” Miller Muhammad said.

Miller Muhammad emphasized the importance of educating people about suicide awareness and prevention like understanding the warning signs of a suicide, such as substance or alcohol abuse, loss of interest in daily activities, isolation and irrational mood swings.

“The people who staff these lines have been trained,” Miller Muhammad said. “They are there to offer support so people can have a sense of hope to turn around the thoughts of wanting to hurt themselves.”

Timika Young, a freshman theatre major and one of the event’s attendees, said she found out about the event through counseling services. Young said the event was accurate in acknowledging the stigma of discussing mental health.

“There is a stigma,” Young said. “People do not want to talk about [mental health issues] unless something happens, and then they will ask themselves why they did not talk about it.”

Young said she is trying to start a club at Columbia that would allow students to focus on mental health.

“I want to start this club to promote [counseling services],” Young said. “A lot of people do not know about the group therapy they offer, or about mental health. People need to get the word out there.”

Kristen Bauer, Title IX deputy coordinator and health educator, said she has worked with SHS since she began in September 2015 to create on-campus events for suicide awareness and they were approached by Josh Corson, a junior creative writing major who was looking to create an informational session.

Bauer said SHS hosted several events such as the monthly Wellness Series on various topics, the Wellness Fair, and STI and pregnancy testing. She also said SHS is exploring how to broaden its presence on campus.

“At this point, I encourage students to approach me about [ideas for awareness],” Bauer said. “We can see how to best meet the needs together.”

Corson, who also chairs the Student Organizations Council, said he approached Bauer at the beginning of the Spring 2016 Semester to create workshops about mental health awareness.

“I recently had a friend of mine [die of] suicide,” Corson said. “That prompted me to do something and raise awareness. It seems like a big issue with kids with all of the pressures from school.”

Corson said Columbia was one of the first institutions in the country to receive a $250,000 grant in the fall of 2006 for workshop programs for suicide awareness and prevention.

Bauer added that the grant helped the college establish a program called the Shannon Hardy Making Connections Workshop set for Mar. 30 from 12:30–3:30 p.m.

According to the Campus Suicide Prevention Program website, the workshop will be held in honor of a woman named Shannon Hardy FC, who had bipolar disorder and died by suicide.

According to Miller Muhammad, SHS and Counseling Services will be passing green note cards with the word “hope” written on them to students across campus.