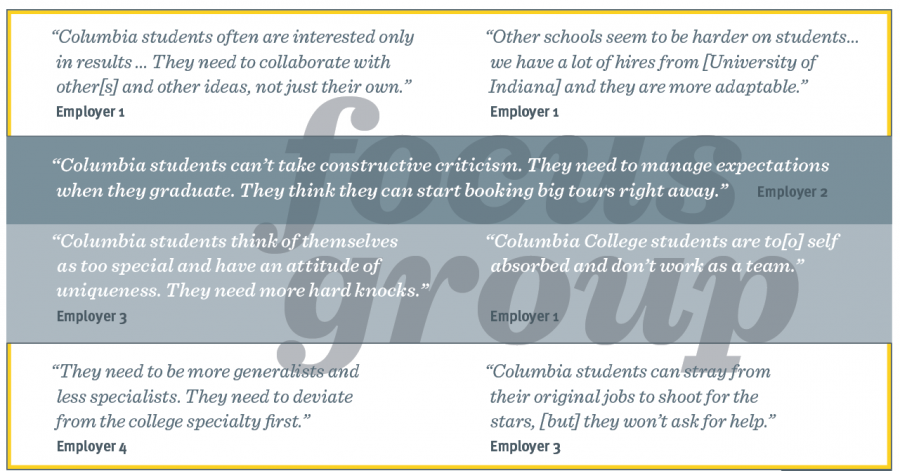 A recent focus group conducted by the college revealed that some industry employers deem Columbia students as “self-absorbed” and lacking adequate business knowledge.

Students were criticized for various weaknesses such as lacking adaptability, having limited experience, not being receptive to constructive criticism and thinking they are “too special” with an “attitude of uniqueness.” Students were compared to graduates from colleges such as Indiana University, Purdue University and the University of Michigan throughout the discussion.

Notes from the focus group, which was held Nov. 4 and included nine unnamed employers who recruit Columbia students, were shared with several deans and administrators via email on Nov. 12 by Deb Maue, vice president of Strategic Marketing and Communications, who invited recipients to “distribute [the results] to others” as they saw fit.

Christie Andersen Asif, director of the Portfolio Center who received the email from Maue, said this feedback affirmed a majority of what the center hears anecdotally from employers.

“A couple of themes I heard often were they thought students were lacking in the survival skills, like professionalism and how to survive on the job and there’s a sense [of] restlessness,” Andersen Asif said. “Recent grads are not always willing to pay dues and work their way up the ladder.”

Andersen Asif said the Portfolio Center works to educate students about career expectations and business environment etiquette in current initiatives like preparation sessions before Job Fairs and in past programming such as mock networking events and salary negotiation practices.

However, these programs have only seen “modest” turnouts, according to Andersen Asif, who added that the former initiatives were discontinued due to low attendance.

Andersen Asif said students in art-based disciplines may not think professional etiquette will apply to their career path, but it is necessary for students regardless of where they work or who their employer is.

“There’s a learning curve,” she said. “They get there. For alumni that are a little further out, companies tend to really like the work they do. It’s the initial getting up to speed that’s a little bit bumpy sometimes.”

Chris Efken, an adjunct professor in the Business & Entrepreneurship Department who teaches the course “Marketing Yourself,” said Columbia students and graduates often have an advantage over others by having experience and a portfolio to show employers, but they need to show how their skills will benefit a specific employer or client.

“They have an inner confidence that helps them go out and sell themselves,” Efken said. “Sometimes the confidence could be perceived as ego, arrogance or ‘I’m better than that.’ That’s hard because until you’re out in the business world, you may not understand that fine line between confidence and arrogance.”

The “Marketing Yourself” course was created to teach students basic business and job-preparation skills, Efken said, adding that it attracts students from various majors. She said most students experience fear of the unknown and worry about knowing how to handle a situation in which they do not know the answer or have the proper skillset.

Efken said she saw some of the notes of the focus group and thought they were true to all students of this generation, not just those at Columbia.

The group said Columbia students need internship experience because it shows “adaptability” and suggested that Columbia institute a collegewide internship requirement prior to graduation.

Tom Joyce, the internship and event coordinator in the Radio Department, said internship opportunities outside the college could teach students the skills suggested by  the focus group, like taking constructive criticism and collaborating with a team.

“We tell students to go in with an open mind,” Joyce said. “We do emphasize to them that when they go to an internship to be readily available to assist in any area possible and try new things.”

Andrew Peron, a senior business & entrepreneurship major who currently works as an account manager at UpCity, a marketing software company, said he learned about on-the-job skills from his professors who were currently working in the marketing field themselves. Peron also said he thinks there are certain things people need to learn by doing, not hearing in the classroom.

“There’s definitely wisdom that could be imparted through those experiences, but to some degree [it’s] something you have to be put into to get a feel for,” he said.

“[Learning] what the job world is like, that could help students a lot more,” he said. “I think it’s a differentiating factor of how people get hired. Understanding how that kind of stuff works [is] a whole different world.”

Trevor Kravits, a 2013 theatre alumnus who has found work as a comedian and as a teaching artist with various companies, said there are several resources for students to ensure success after college through the Portfolio Center, and the ability to collaborate with other students, but it is up to the students to find them.

Kravits said what sets successful alumni apart from those who struggle is the ability to take criticism and self-reflect. He also said he saw it was the students in his theater classes who did not always receive leading roles who succeeded because they learned to accept rejection and work hard.

“You can probably graduate from a lot of these classes with straight A’s and learn nothing,” Kravits said. “It’s easy to let the information come and go. It’s up to you to take responsibility in your own hands and learn that.”

While the Strategic Plan already calls for more opportunities for experiential learning, Andersen Asif said she thinks this focus group could affect how the college stresses opportunities for students to better understand professional standards.

“It’s still good to have that professional voice to hear what they say, but that has to be backed by ‘Go out there and see this in practice,’” Andersen Asif said. “There’s already a huge experiential component to Columbia, but the more we can push students to get out of the classroom and into these industry settings, the quicker they’ll learn.”