American Authors talks ‘the next level’ 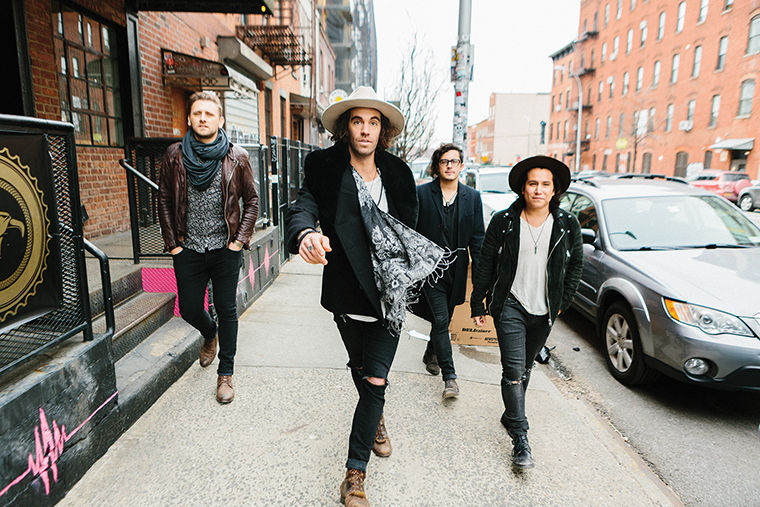 American Authors started as The Blue Pages in 2007 when their members were attending Berklee College of Music in Boston.

Two years after American Authors’ debut album reached gold status, the indie rock band is set to release its sophomore album, What We Live For, on July 1.

Best known for the single “Best Day of My Life,” American Authors achieved worldwide recognition after the song was featured on TV shows and commercials, movies and video games and certified triple platinum. The song was released as a single, a track on the band’s self-titled EP and on its first full-length album, Oh, What a Life.

Leading up to the release of What We Live For, American Authors will perform in “intimate” club settings on a tour scheduled to stop May 4 at the Subterranean, 2011 W. North Ave., for a sold-out show.

The Chronicle spoke with American Authors’ vocalist Zac Barnett about What We Live For, how the band has stayed together for nearly 10 years and the name change from The Blue Pages to American Authors.

THE CHRONICLE: How is the new album different from previous ones?

ZAC BARNETT: We tried to take a lot of the stuff that our fans like and love about us from Oh, What a Life and take that to the next level as far as sounds go. [We] brought back some of the old instruments like mandolin and banjo but also experimented with a lot of different sounds like vocal samples. We brought back a lot of piano [and] bigger harmonies.

Lyrically, the first album was much more about where we’d come from and the journey to where we’re at now. This one is really more focused on what we live for right now, all the obstacles and struggles we have in the future and what we’re doing today.

How long has What We Live For been in the works?

We worked on this album for a year or so. We’ve been writing for it and coming up with different songs and working on it. It was crazy because, when we first started recording about a year ago, we came up with a bunch of material [so] we could have just stopped, and we would have had an album right there. In just the last few months, we kept writing, and some of our best material came out of those sessions. A bunch of those songs ended up making the album and taking over.

What is it like having your songs featured on so many platforms?

It’s amazing. Wherever we can share our music is a blessing. We [personally] approve every request that comes in, so we know where our music is going, and we see it all. Sharing music in so many different ways nowadays is such a huge part of being in a band, and it’s so great that we get to appeal to the masses and put our music out there in all these formats and different ways like video games, commercials, movies and TV.

Why did the band’s name change  from The Blue Pages to American Authors?

We were living in a new city—we had moved to Brooklyn, New York—and our music had just changed so much from where it began. We were being influenced by so many new things that it was just time for a fresh start.

We’ve grown as people over the years, and our music has progressed. It’s always been rock music and pop music, and one of the best parts of where our music is now is that when we came up with our first album, we weren’t really trying to fit into any sort of label or scene. We were just having fun and writing the lyrics that came from the heart and adding in any kind of sound we could.

What has kept American Authors together for so long?

It’s always nice, especially when you’re in a collaborative setting, to be open-minded, to be open to new ideas and to be open to working with one another. I think the biggest things [are] communication and listening. It’s the most important part about all relationships—always being open and hearing the other person’s side.

What do you guys do between shows to relax?

We do a lot of different things. We go to the gym a lot and go work out. When we have off days, we go see a lot of movies. The other day, we went to an indoor trampoline park, and that was really fun. We’re always looking for new and crazy adventures to get into.