Life on the edge 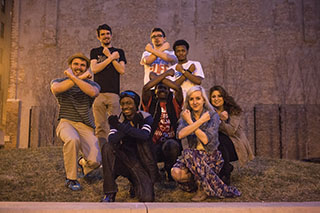 Many college students sneak alcohol past residence hall security guards and cover the vents in their dorm rooms to contain the smell of weed on the weekend, but within that haze is a group of students who do not indulge in such weekend festivities—the straight edge students.

Straight edge describes someone who chooses not to smoke, drink or do drugs. Some also practice vegetarianism and refrain from engaging in promiscuous sex. The movement emerged from the Washington, D.C. punk-rock scene in the early ‘80s, said Ross Haenfler, professor of sociology at the University of Mississippi and author of “Straight Edge: Hardcore Punk, Clean-Living Youth, and Social Change.”

“There were a number of kids involved in that scene who liked the ‘question everything’ mentality of punk-rock—they liked the music, they liked the intensity, but they weren’t into the heavy drinking, drug use [and] random sexual encounters that were going along with punk,” Haenfler said.

“I think it would be really cool to do an activism thing,” Holt said. “It would be great to raise awareness about sobriety, and if you’re struggling with alcohol or drug addiction, [offer information about] where can you go to find help.”

The straight edge lifestyle is a practical option for people who are uncomfortable with peer pressures to smoke, drink or do drugs. Sarah Pilotte, a sophomore business & entrepreneurship major and a member of Straightedge at Columbia, said she decided to be straight edge as a commitment to healthy living.

Early straight edge fans felt that refraining from drugs or drinking allowed them to think more critically about society with a clear mind, Haenfler said.

“A lot of straight edge kids take the basic ideas of straight edge and think about other ways they can improve their lives and make the world a more just and sustainable place,” Haenfler said.

One common value shared among Straightedge at Columbia members is not using artificial means to feel happiness. Many say they can enjoy themselves without altering their mental state in any way.

“People use drinking and drugs [as] a shortcut to find happiness, but I have always dedicated myself to trying to find happiness in my life that is authentic and sustainable,” said Drew Lodarek, a Straightedge at Columbia group member. “I like to keep a clear conscious all the time. I like that I am accountable for every decision that I make.”

Lodarek said straight-edgers are sometimes stigmatized because the outside community assumes those in the straight edge culture judge them for using substances.

“Everybody has the choice to drink or not,” Lodarek said. “I just want people to be more comfortable with the idea that drinking isn’t the only choice. This should be a safe place. We’re not pressuring people to change. We’re just informing people.”

“Freedom—that’s what straight edge and punk-rock means to me,” Obrecki said.