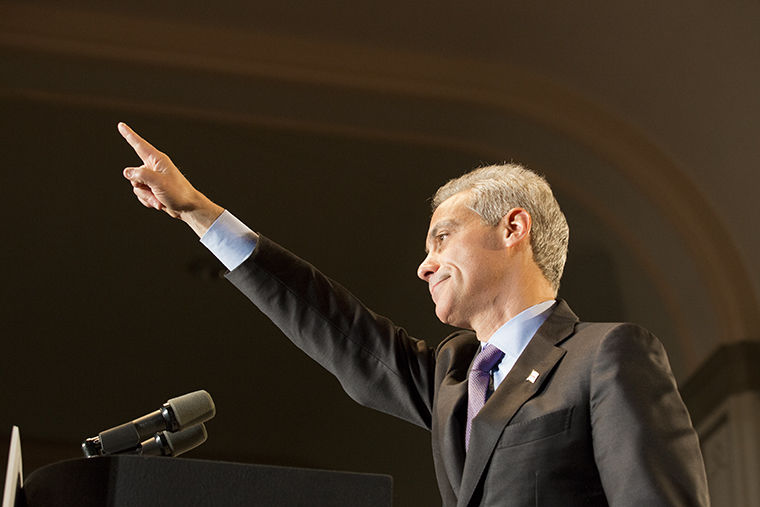 Mayor Rahm Emanuel is ready for round two against Cook County Commissioner Jesus “Chuy” Garcia, after conceding that he would not reach the 50 percent of the vote needed for reelection on Feb. 24.

The two are now propelled into a charged runoff race. With 98 percent of precincts reporting as of press time, Emanuel received 45.37 percent of the vote. Garcia lagged behind with 33.89 percent. The two will campaign for six more weeks and Chicago voters will decide the winner April 7.

“We have come a long way and have a little further to go” Emanuel said in a voice made raspy by last minute campaigning.

The crowd cheered wildly as Emanuel spoke, lauding his achievements in office and promoting his vision for the future of Chicago. Union members stood behind him displaying handwritten signs with the names of Chicago’s neighborhoods. He said that while Chicago has come so far, “there is still a long way to go.”

Luis Gutierrez (D—IL) gave Emanuel a fiery introduction, proclaiming that four years ago he had tried his hardest to make sure Emanuel would not be the mayor of Chicago, and he will now spend the next six weeks doing everything in his power to ensure he is.

Gutierrez said Chicago is an immigrant city and that Emanuel has worked toward making Chicago work for everyone. Emanuel, whose grandfather emigrated from Moldova, said that his being mayor is emblematic of that legacy.

Rahm told his supporters to enjoy the night, promising that “tomorrow, I’ll see you out at the El stops.”