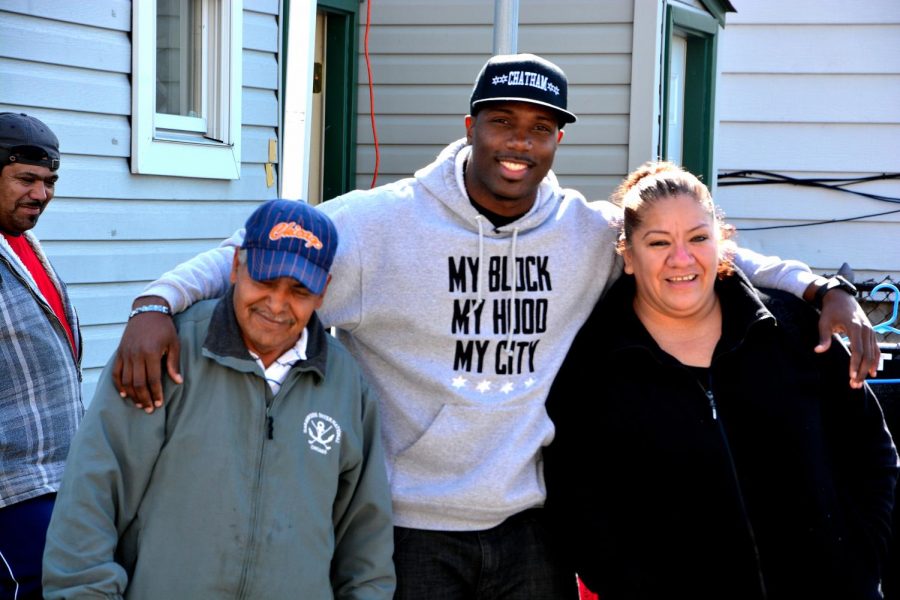 Jahmal Cole likes to say he was raised on a Greyhound bus. Born in North Chicago, but having family in the southern part of the United States, Cole spent much of his childhood traveling between his home and family who lived hours away. He said this taught him to appreciate travel and to value cultural differences across the country.

When Cole, 32, a community engagement manager for the Illinois Network of Charter Schools, learned that many teenagers on Chicago’s South Side have never visited the city’s central business district or been to the lake shore, he decided to try to change that.

Cole founded My Block, My Hood, My City in 2013, a program that gives teens an opportunity to experience new places and discover opportunities in their city. What started with a small group of Chicago teenagers now includes dozens of explorers taking monthly trips across the city—and Cole says he is just

The Chronicle spoke with Cole about growing up in Chicago, advocating for education reform and working as a volunteer.

The Chronicle: Where have you lived throughout your life?

Jahmal Cole: I grew up in North Chicago. I went to college at Wayne State in Nebraska, two hours north of Omaha. It was a fish-out-of- water experience—I immersed myself in an entirely new culture. I’ve lived in Nebraska, North Chicago, [now] the South Side in Chatham. I also lived in England for six months.

What do you do in your free time?

Volunteering takes all my time. I get a lot of volunteers from throughout the city. I would not be in this position if it wasn’t for the generosity of a lot of Chicagoans in a lot of different communities.

What do you do as an advocate for education reform?

My full-time job is at the Illinois Network of Charter Schools. They hired me to be a community engagement manager. I educate politicians like aldermen and state representatives about the most effective schools in their wards.

When did you start getting involved with volunteering?

I started volunteering in Cook County Jail. I thought I could be a role model in [inmates’] lives. I started thinking I wanted to be a great speaker, but nobody wanted to hear me speak. I had to learn to listen. They would hug me and talk to me—immediately I was taken aback. These were like kids I’d see on the Red Line, they were friendly, they had great personalities. They just did not have any role models. They were remorseful. They were smart. They were not savages. I was immediately empathetic. We as a society have failed a whole generation of teenagers.I took a kid from Pullman to Edgewater this weekend. He had never been to the lake. I’m serious. Teenagers would tell me they’ve never been downtown. I just couldn’t believe it. I could not afford to take them to Nebraska, England [or] New York, but I could afford to take them to Chinatown. That’s where the idea came from.

How did you start the program? Was it difficult?

I wanted to get teenagers from the street [and] the hood. How do I get teenagers from the hood and expand their worldview? I made shirts and gave them to barbers. Barbers were my main recruiters. They would recruit teenagers for me. I’ve been doing it for around two and half years. Like anything, you build. My Block, My Hood, My City is going to work in Boston [and] Panama. This is just the beginning.

What have you learned from the program?

I’ve learned that it’s not fair to take one kid on an exploration and never see him again. That’s why every teenager has to be in the program for a year. I think what I’m doing is planting seeds, or making a deposit they can draw from. I’m learning how to serve better and how to leverage resources from the city. There are a lot of people in Chicago who are willing to help. Teenagers are teaching me about a lot of things, too. They know social media better than me. The kids are teaching me how to help them. Being around them, I’m learning how to be a better servant to them.

What experiences have been most rewarding for you?

When I’m able to see the smiles on their faces in the pictures, or they’ll text me designs of hats and say ‘Can you make this come to life for us?’ They are learning how to be entrepreneurs through the program, and that’s really rewarding. It’s not because of Jahmal Cole. Anybody could do what I am doing, and more people should be doing it.

What advice do you have for others who want to get involved and spark change in their communities?

One person at a time, commit yourself. If you don’t have those authentic relationships with people, word of mouth won’t spread. If you want to be a community organizer, learn what assets are available in your community.