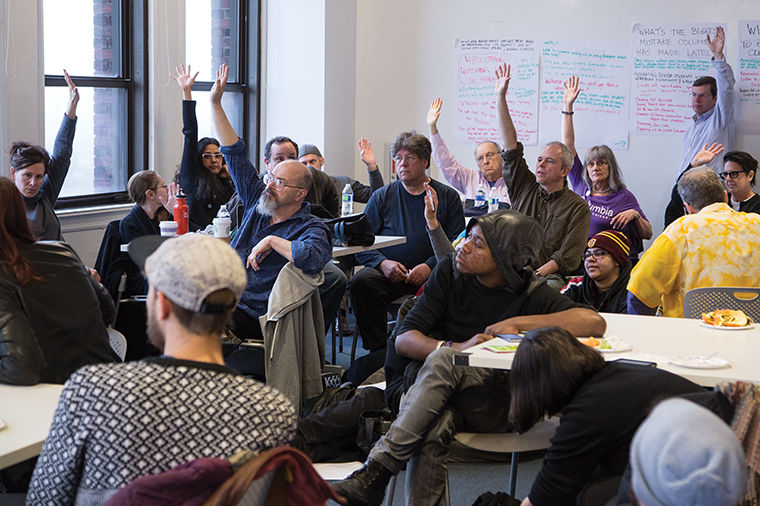 “Raise your hand if your class load has been reduced, you’ve been terminated or you have not been given the sections you’re used to having,” said Nic Ruley, an adjunct professor in the Television Department at the April 9 forum hosted by P-Fac to address concerns among students, staff and faculty.

Shouts of support echoed throughout the eighth floor of the college’s 600 S. Michigan Ave. Building on April 9 as students and faculty alike shared their frustration with recent administrative decisions at a P-Fac-hosted forum.

P-Fac, the college’s part-time faculty union, held the forum to give faculty, staff and students the opportunity to voice their dissatisfaction with ongoing changes at the college. At the forefront of the discussion were issues such as increasing class sizes, elimination of class offerings and changes in curriculum being imposed by the college’s administration.

During the forum, Diana Vallera, P-Fac president and an adjunct professor in the Photography Department, said the next course of action is for students and faculty to form a coalition to help raise awareness of the current situation, as well as collectively present its demands on April 20 at the final Strategic Planning Committee meeting.

When told they are not permitted to attend the April 20 meeting, students discussed staging a sit-in and picketing outside. Some have already started to take action by handing out informational flyers to classmates and starting a #SaveColumbia hashtag on Twitter.

The coalition will also present the demands to the president and board of trustees and ask that they be met by the end of the current semester.

According to Vallera, these demands will include a tuition freeze for students, as well as more transparency as to how student tuition is being allocated. The coalition will also ask for a reversal of the implementation of larger class sizes and curriculum cuts. Finally, it will demand that the proposed six new administrative positions be eliminated and will ask that President and CEO Kwang-Wu Kim and his cabinet members take significant pay cuts.

“This was not part of the strategic planning,” Vallera said. “It was a top-down decision that the college implemented.”

Vallera, who sits on the Strategic Planning Committee, said in its last meeting, she asked Kim and all vice presidents to cut their salaries in half and give that money to the students.

“When they start targeting even students and student workers—students are coming here to get experience—these are the types of things that we’re collectively getting upset about,” Vallera said. “They’re eliminating all the student workers.”

Many students also said that they feel that Columbia is not delivering on many of the educational promises that were made to them when they first enrolled at the college.

“If the goal is student learning and success and the goal is the mission of the college, then let’s figure out how to make that happen,” Vallera said.

A major concern among students and faculty is increasing class sizes and the lack of additional sections of popular courses.

“Class size is becoming an issue, especially in fiction writing when professors have to read 60 plus pages of your work,” said Mike Burke, a senior art + design major. “Once again, I’ve had issues with registering for certain classes that I’ve needed to graduate.”

Due to the decreased number of classes, adjunct professors are seeing hours cut and expressed concern about whether or not more hours will be eliminated in the future.

Martin Bernstein, an adjunct professor in the Cinema Art + Science Department, has been teaching at Columbia for nine years. Bernstein said he also teaches at DePaul to supplement his income, as he is usually offered only eight credit hours of instruction per semester at the college. For the first time, his credit hours were cut to five for the Fall 2015 Semester.

“The answer I’m always given is that it’s saving us money,” Vallera said. “If the decisions [at] the college are being made solely for saving us money, then that’s not acceptable.”

Attendees also said the recent creation of the six new administrative positions within the administration was unnecessary and that the money could instead be used to support student worker positions.

As a result of the college’s recent budget cuts in combination with Chicago City Council’s December vote to increase minimum wage to $10 an hour, 138–150 student worker positions could potentially be eliminated, as reported March 16 by The Chronicle.

Leading up to the Strategic Planning meeting, Vallera said students and faculty need to continue to work together to spread awareness and exchange ideas about how to project their voices to the administration.