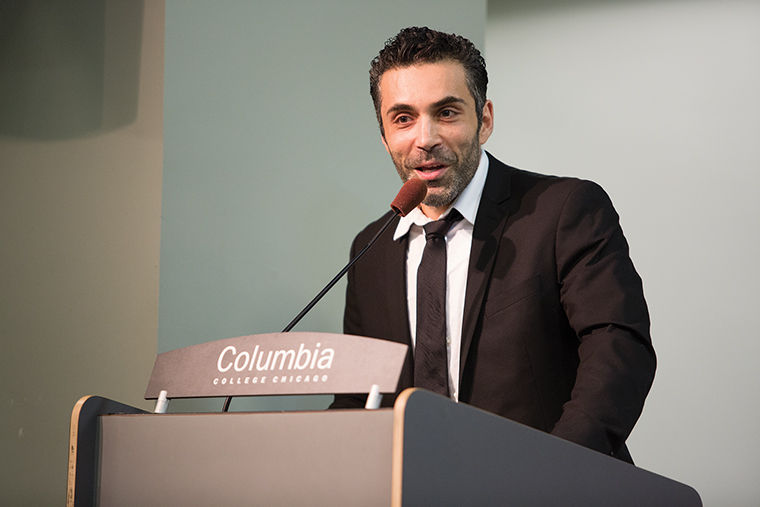 One section of Adjunct Professor Iymen Chehade’s “The Israeli-Palestinian Conflict” was not offered for the Spring 2016 Semester. During March 2014, he spoke at a forum about academic freedom.

A section of adjunct professor Iymen Chehade’s “The Israeli-Palestinian Conflict” course was cut for the Spring 2016 Semester as of the beginning of registration. When the same course was cut in November 2013, an Illinois committee of the American Association of University Professors found Columbia guilty of an academic freedom violation, which the college denied, as reported April 7, 2014, by The Chronicle.

Chehade, who teaches in the History, Humanities & Social Sciences Department and the only professor who teaches the course, said this situation is different from the previous instance because the course was simply not offered for the Spring 2016 Semester.

He said he does worry the college is violating his academic freedom again but is trying to give them “the benefit of the doubt.”

The college decides how many courses and sections of courses will be offered based on the semester’s total projected enrollment, curriculum rotation and the availability of full-time faculty, said Cara Birch, spokeswoman for the college. She added that there is a usual projected decrease in enrollment between the Fall and Spring semesters.

“When it comes to his particular course, or anybody’s, it always has to go by that process,” Birch said. “The idea that anybody is being targeted for any reason would be absolutely false and [the college] will challenge that completely.”

Chehade said he previously had difficulty communicating with Steven Corey, the former chair of the HHSS Department and current Interim Dean of the School of Liberal Arts & Sciences  but has had open dialogue with Erin McCarthy, the new acting chair of the department, who was not involved in the previous controversy. McCarthy was not made available for comment, as of press time.

“She has been around for a while [and] is a very well-respected professor in the department,” Chehade said. “Hopefully there can be some dialogue to resolve this situation.”

A similar dispute involving Chehade’s course arose when one of his two assigned sections was removed from online registration on Oasis in November 2013.

The situation later developed into a struggle that gained national attention, leading to a Change.org petition and a March 20, 2014, forum on academic freedom.

The college denied Chehade’s claim that the class’s cancellation was linked to a student’s complaint about a class viewing of “5 Broken Cameras,” an award-winning documentary that follows a Palestinian filmmaker as he deals with Israel’s settlement policies in the West Bank, as reported March 31, 2014, by The Chronicle.

The section of his class was later reinstated for the Fall 2014 Semester, as reported April 7, 2014 by The Chronicle.

P-Fac filed a federal lawsuit Oct. 9 against the college alleging Columbia breached its contractual duty by refusing to arbitrate grievances brought on behalf of adjunct professors, including Chehade, regarding the loss of his class and a breach of academic freedom, as reported Oct. 26 by The Chronicle.

According to P-Fac’s current and previous agreements with the college, contract disputes can be resolved through arbitration as the final step of the grievance process after other attempts at resolution have been made.

“I am really trying to discuss this internally,” Chehade said. “It didn’t work out. They are still refusing to arbitrate [about the situation].”

Chehade said if the college is concerned about its enrollment figures, more classes that attract students should be offered.

“We want to do the best we can and offer classes that interest the students,” Chehade said. “I don’t know what the rationale is…. They haven’t been rational throughout this whole process.”

John Draughon, a junior cinema art + science major, said Chehade’s class was the first time he learned about the conflict where both sides of the argument were presented in an equal manner. He added it is apparent that Chehade has pro-Palestine views but said it allows students, like himself who have only experienced the Israeli and Jewish side of the conflict, a different perspective.

“This class makes it more available for people to become aware [of the conflict], especially students,” Draughon said. “I think cutting it is just wrong.”

Chehade said the content of the course and his years of teaching experience have created a positive change for the college.

“I am here to try to do my job as best as possible, and that is not enough unfortunately,” Chehade said. “It wasn’t enough last year as the controversy resulted, and I don’t know where the college has its priorities, but from my experience the last couple of years, it doesn’t seem to be with the students.”

Chehade said he thinks it is unlikely the college will add a second section.

As of press time, Chehade’s class was closed after 25 students registered and no new section has been added.