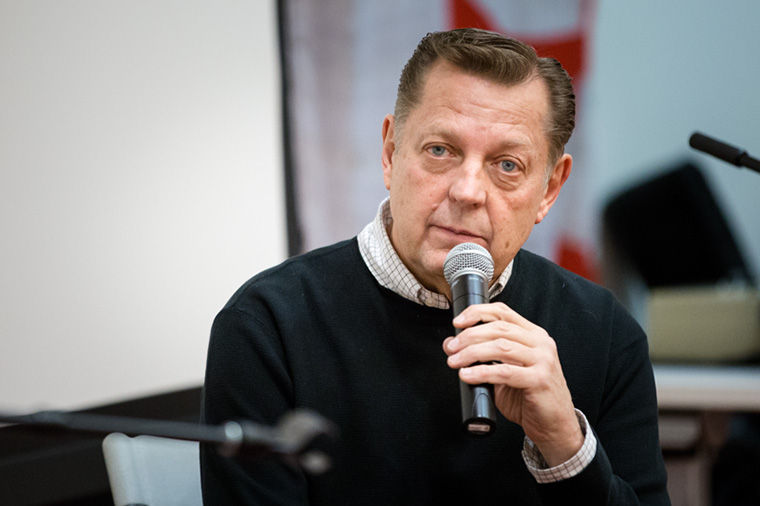 Priest and a social activist Michael Pfleger speaking during the opening event of the African-American heritage month on Feb. 3 at 600 S. Michigan Ave. Building’s Ferguson Hall.

If Father Michael Pfleger could hijack a tourist bus to prove that Chicago is a tale of two cities—one where the North Side and Downtown look nothing like the West and the South sides—he would seize the opportunity. Instead of showing visitors around the Magnificent Mile, he’d be likely to take them to 79th Street and show them schools with broken windows, abandoned buildings and empty lots, as he recalled telling his churchgoers a couple of Sundays ago.

During the program, Pfleger—who has been recognized for his participation in anti-drug and gun control campaigns, his involvement in the Black Lives Matter movement and his fight for education reform and inclusiveness—was questioned by Joshua Short, a junior journalism major, who asked the crusading cleric about segregation and economic disparity in Chicago, the importance of voting and the need to stay true to oneself.

“When I hear on the nightly news ‘American unemployment is down to 5 percent,’” Pfleger said, clapping his hands sarcastically, “it tells me I don’t live in America because in Englewood and Auburn Gresham it’s 25 or 35 percent.”

The Q&A, organized by the Office of African-American Cultural Affairs and the Black Student Union, launched a series of contemporary lectures called “Impact: The Untold Story” that will bring influential speakers to campus throughout February to introduce students, faculty and staff to passionate ideas and concepts.

Brooke Thomas, a senior business & entrepreneurship major and president of BSU, said she invited Pfleger to be kickoff speaker because of his media presence and public speaking skills.

Thomas said it is important to look up to people who, like Pfleger, lead by example.

“We thought with all the work that Father Pfleger does, he would be the obvious choice,” Weatherly said. “He is definitely a representative of doing Christian work, and it doesn’t matter what color.”

This is an idea Pfleger shared by detailing his experiences as a white man living in a predominantly black neighborhood on Chicago’s South Side for 40 years.

Pfleger said he is not shocked when people say he lives amid the “illness of the city” because Chicago is one of the most segregated cities in the country, but he said he finds it racist when people ask him what it is like to be a white priest living in a black community.

“That’s a real racist question because there’s always been white people in the black community—there [are] police, teachers [and] store owners,” Pfleger said. “The real question [is] what is it like to be a black person in an all-white community?”

Pfleger said America will not achieve its potential until it has the courage to deal with the racial issue, which stand at the root of its problems.

He also highlighted the importance of political education, which directly influences voter turnout because when people know their candidates and are not persuaded by polls, pastors or editorials, they can make better decisions.

Protests are important, but they are only the first step toward solutions, Pfleger said, adding that if people do not educate themselves and go out and vote, protests are useless.

He also advised the audience—mostly Columbia students—to believe in their passion and stop trying to fit the mainstream.

“You’re better off being poor in a studio and being true to yourself than being in some nice house, [having] sold  your soul out and [then] someday you look into the mirror and say, ‘What the hell happened to me?’” Pfleger said.