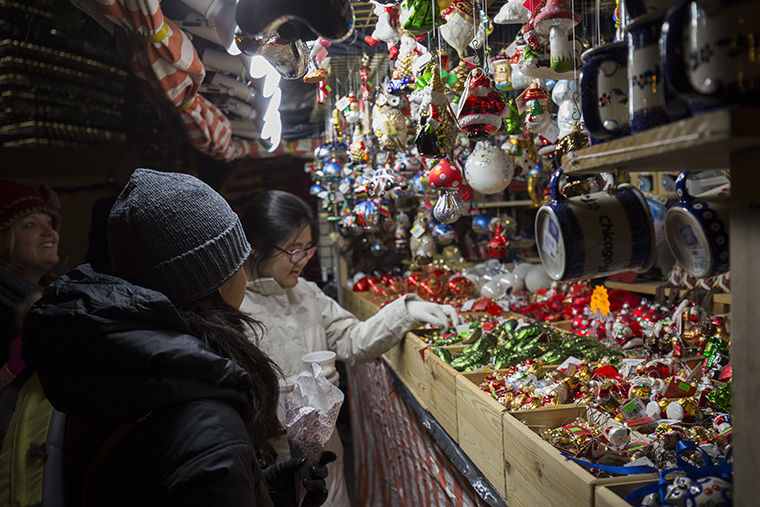 More than 65 percent of Christkindlmarket’s vendors travel from Germany to participate, according to the market’s website.

The first Christkindlmarket in Chicago, 411 N. Michigan Ave., took place 20 years ago with just a handful of wooden stands in which patrons could shop. This year, the Christkindlmarket will be hosted at Daley Plaza, 50 W. Washington St., and include 55 different vendors providing traditional German goods to Chicagoans in walk-in cabins and heated tents, but missing will be the city’s 60-foot Christmas tree.

To celebrate its 20th anniversary, Christkindlmarket will host a ticketed kick-off party Nov. 19, according to Biester Priebe.

According to the market’s website, the kick-off party will include a buffet, a sneak preview of popular vendors and live entertainment.

“We used to always do [the kick-off party] with the City of Chicago with the tree lighting ceremony, [but it] moved to Millennium Park,” Biester Priebe said.

This year’s market includes performances by new and returning theater troupes, a capella groups and dance companies during “performance days” dedicated to each of those arts, which are new additions in honor of the 20th anniversary, Biester Priebe said.

She added there are new events for children hosted by their Kinderclub this year, including an entire day dedicated to children’s activities on Dec. 2.

“In the evening, we have our annual children’s lantern parade headed off by our Christkind,” Biester Priebe said.

The Christkind is a traditional German fairy-like angel who delivers gifts to children on Christmas.

Biester Priebe said the market will feature all vendors in a central location at Daley Plaza this year.

Frank Baez-Doelle has been a vendor at the market for his shop, Frank’s Ornament House, since the market’s inaugural year.

“Everybody loves the Christmas market,” Baez-Doelle said. “It became a tradition to go to the market and see the foreign, unique products and just get in the spirit of Christmas.”

Baez-Doelle’s shop boasts more than 2,500 handmade ornaments imported from Germany, where his family runs shops in two other Christkindlemarkts, he said.

“[At the market] we prepare to get into the spirit and for Christmas. We shop for gifts and enjoy being outside,” Baez-Doelle said.

Baez-Doelle said the market has improved and become more professional in the last 20 years.

“More people know about the market now,” Baez-Doelle said. “If you ask someone about the Christmas market in Chicago, everybody knows.”

“A lot of the merchandise [at the German Christmas markets] is homemade,” Maisey said. “They value more traditional, homemade and artistic styles.”

Maisey said she is excited to go to Chicago’s Christkindlmarket, but she is also a bit wary.

“As far as content goes, you’re going to get American influences,” Maisey said. “I liked the ones in Germany, [so] I’m excited no matter the differences.”

Biester Priebe said admission to the market is free, so everyone should attend.

“You can have fun, and you don’t have to buy anything,” Biester Priebe said. “It’s about enjoying the holidays and the city as well.”