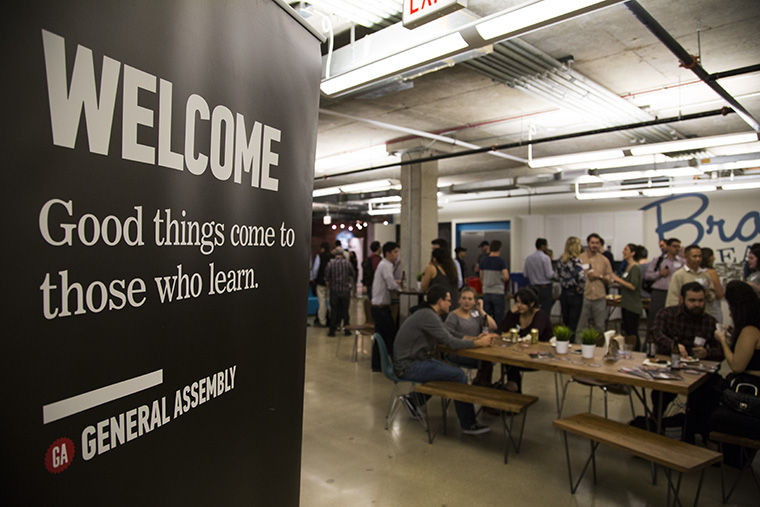 Entrepreneurs celebrated their accomplishments with General Assembly Chicago, which offers classes and workshops in business, design and technology, by ringing in the institute’s first anniversary Nov. 5 at Brad’s Deals, 640 N. LaSalle St.

The party kicked off General Assembly’s first Made in Chicago Week, scheduled to run through Nov. 17. The week will include in-depth discussions and panels with local businesses that have influenced Chicago’s culture.

Taylor Manus, General Assembly Chicago’s manager of partnership and events, said she looks forward to connecting people through the workshops and discussions during Made in Chicago Week.

“[We want] to foster collaboration through conversation and learning across these topics,” Manus said. “We are hoping to celebrate all the great things being made, taught and grown in Chicago. [We are] hoping to bring together people of all backgrounds—tech, creative, food [and] media.”

Chicago entrepreneur Philip Tadros, founder of Doejo and co-founder of several local coffee shops such as Dollop, Bow Truss and Kickstand, is set to speak on a Nov. 9 panel about being a “foodpreneur.” He said the inaugural event will be an opportunity to connect with many people who may need business help.

He said his entrepreneurial career has been nonstop work since it began in early 2000, but it is something he has gotten used to.

“It is rewarding because it is something you are a part of and watch grow,” Tadros said. “You get better at enjoying the struggle.”

Tadros said the Internet makes it easier for people to learn, create and market their products.

“[It is] allowing anybody to become an entrepreneur. It is somewhat of a rebirth,” he said.

Clayton Guse, assistant editor of the TimeOut Chicago blog and neighborhood guides, noted the Internet’s significant impact on the journalism industry. Guse will moderate a panel discussion on the future of media and reliance on mobile devices Nov. 10.

“Social media [is] having a huge impact [on] digesting more news and articles through Facebook and Twitter,” Guse said.

He said he is excited for the panel to shed light on these issues and talk with other professionals in the field, and it will provide a think tank discussion of where the tech industry is going in Chicago, and overall.

He said General Assembly has helped entrepreneurs with the business shift and provides  access to tech education through new opportunities that are crucial.

“The role they play as educators is pretty huge,” he said. “Lots of people are coming out of college with no computer science degrees, going to GA and getting the skills they need for programming.”

Guse and Manus said General Assembly’s Made in Chicago Week highlights Chicago’s ability to keep the tech talent in the city and be known as a tech industry.

Marissa Arnold, senior director of communications and public relations at General Assembly in New York, said the institution aims to provide access to opportunities that build skills and confidence for individuals or growing companies through workshops, events and various classes.

“As companies continue to grow and foster their digital team, they need a workforce to support that,” Arnold said. “General Assembly is a big part of that equation  by helping people pursue what they love.”

Guse said he is curious to see where the media industry is heading in the future, as it is something that needs to be addressed.

“That MAC is going to be here highlights that Chicago is becoming that kind of town, and there are a lot of resources for start-ups and entrepreneurs here.”

For a complete list of Made in Chicago events, visit Blog.GeneralAssemb.ly/Made-In-Chicago-Week.