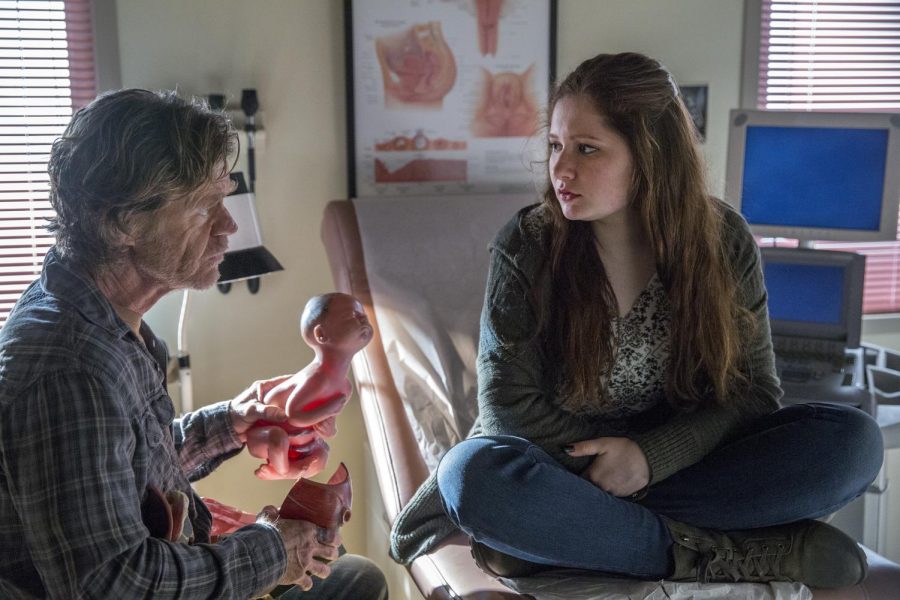 ‘Shameless,’ starring Emma Kenney as one of the six Gallagher children and William H. Macy as father Frank Gallagher (pictured above), premieres its seventh season on Showtime Oct. 2.

“Growing up” in a family of six kids with an absentee mother and an alcoholic father in Chicago’s South Side is not easy, but for Emma Kenney, who plays Debbie Gallagher on Showtime’s “Shameless,” this role has been a learning experience.

Kenney started on the show as  middle-child Debbie when she was just 10 years old. Now, at 16, she is shooting the show’s seventh season premiering Oct. 2 in which her character adjusts into her new role as a young mom. The dramedy, adapted from a British show of the same name, also stars William H. Macy as patriarch of the Gallagher family and Emmy Rossum as the eldest sister and de facto mother of Debbie and her siblings.

The Chronicle spoke with Kenney about playing a teenage mother, her character’s family dynamics and filming in Chicago.

THE CHRONICLE: What can you say about the upcoming season of “Shameless”?

EMMA KENNEY: I find season seven to be a very funny, comedic season. My character, Debbie, is going to be navigating motherhood [and] trying to figure out how to parent her daughter, Franny, the best way she possibly can, doing it as a single teenage mother on the South Side of Chicago with no support.

How would you describe how Debbie is handling her transition into motherhood?

“Overwhelmed” is a good way to describe Debbie this season. She is a little desperate and unconfident in the sense that she does not know if she is doing the right thing. She is a bit regretful, but I don’t think she would ever not want to have Franny. Debbie is feeling almost guilt-ridden this season. She does not want to end up like [her mother] Monica—leaving and abandoning her child like Monica and [her father] Frank did to Debbie and the Gallaghers.

Is Debbie going to start seeing through Frank’s façade as much as her siblings do?

I definitely think Debbie has given up hope Frank is going to come around, sober up and start being the father he should be. I do not think she will ever really lose hope [entirely]. She just expects the worst but is hoping for the best with her relationship with Frank and that everything will sort itself out.

Your character and the other Gallaghers have gone through many changes since the first season. What about those changes have you enjoyed playing?

I have totally enjoyed the changes. When you are on a TV show for such a long time, especially at the age that I am at now, I have been growing up on the show as well as Debbie and all the characters. I think it is interesting to be incorporating my personal growth and change as a human being with Debbie’s personal change. It is interesting how art imitates life, and life is art, and how the writers’ observations on our lives come through the characters in the scripts.

What have you learned from playing Debbie?

Debbie is extremely loyal, and she has been disappointed countless times in her life and let down. I think I have been a very loyal person, and I personally struggle with commitment, so it is interesting and inspiring to see Debbie so committed to everything she goes through.

What are the dynamics like among the Gallagher siblings?

Debbie and [eldest brother] Lip have always had a really close relationship because they are both scholarly in a way. I would say they are the smartest Gallaghers academically. With Ian, Debbie respects Ian and wants the best for him. She obviously loves him and is close to him. Debbie relates to Ian [feeling] different because she feels different too. For Carl, Debbie just sees Carl as her stupid little brother, but they will always have each other’s backs. Liam is a little baby, and Debbie has always looked out for him.

Debbie’s relationship with Fiona is the most complex. Debbie is kind of going down the same path as Fiona, which is not a bad thing necessarily. I think they are very similar characters, and because they are so similar, they are butting heads right now. It is a very maternal relationship, [as if] Fiona is her mother, which she definitely is.

What are some of the differences between filming in Chicago and in California?

Chicago is my favorite city in the world. I love filming in Chicago. It brings me so much joy. You feel so much more connected to the characters, truly, to the show and the storyline when you are actually there in the environment. We normally shoot at Warner Bros. in [Pasadena, California]—so it does not really feel “Gallagher-ized.” It is easier to connect to the character [in Chicago]. We go as a cast, and it’s just like a big family. We always have such a great time and go to cool restaurants and go shopping. I always get deep dish pizza with Shanola [Hampton, who plays Veronica Fisher]. It’s a tradition.

We are all super close. We have all literally grown up together. This is season seven—I have known these people for almost a decade at this point. I started when I was 10 years old—Ethan [Cutkosky, who plays Carl] was 10 years old I am about to be 17, and Ethan just turned 17. Cam [Monaghan, who plays Ian,] was 16 and now he’s 23. This was a lot of our first big projects, so we have all gone through this experience in unison and understand how we [each] feel about everything.

What is it about ‘Shameless’ that keeps people coming back every season?

I think it is just kind of the excitement and hype about it. The Gallaghers always have something going on. There is always some kind of plot twist. I think it is interesting and just relatable. Maybe [life] is not as much of a dramatic extreme as the Gallaghers’ lives have to be, but life is not constantly rainbows and daisies. It is not a typical kind of sitcom you see on TV where everything is glorified and romanticized. It is relatable, and it makes people feel better about themselves without making a mockery of people who actually have similar lifestyles to the Gallaghers because we never try to make fun of the lifestyle—we just try to realize it.

As someone who plays a teenage mother, what would you say to fans of the show who are teen moms?

Just to keep on doing what you are doing, keep supporting your child and believing things are going to get better. Find support in ways you can. Not everybody is going to be supportive, but that is just closed-minded[ness]. It is as simple as that. Do what you have to do to take care of your child. You are not going to regret it 10 years from now when your baby is beautiful and healthy.