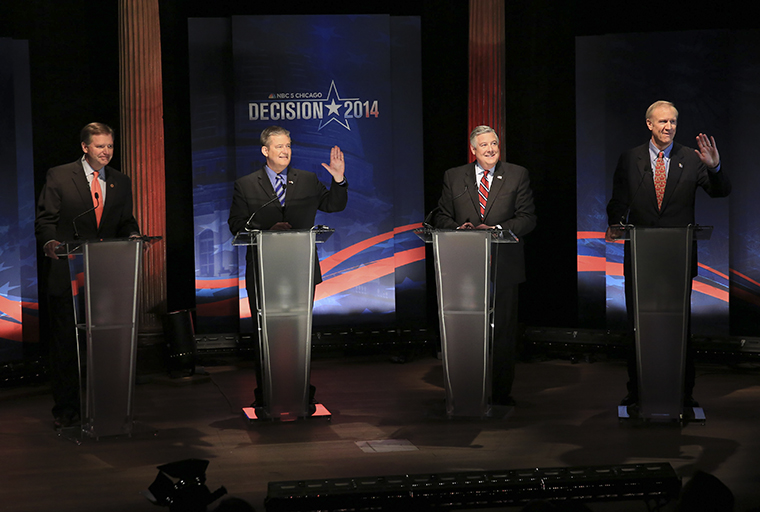 (From left) Republican gubernatorial candidates Bill Brady, Dan Rutherford, Kirk Dillard and Bruce Rauner spoke during a March 4 primary forum to discuss their plans for decreasing the unemployment rate and improving the economy.

With Illinois’ March 18 primary quickly approaching, the race is heating up as the four Republican candidates for governor make their final cases for why they should be the Republican nominee.

Harris School of Public Policy Studies and NBC Chicago, at the Reva and David Logan Center for the Arts, 915 E. 60th St.

“If you raise the minimum wage, you eliminate opportunities for high school and college students,” Brady said. “I called for putting a moratorium on the minimum wage so it stays at the current level. Let the federal level catch up.”

Rutherford, Rauner and Dillard agreed that the state minimum wage should remain at $8.25, but Rutherford said he would only increase it if it encourages business development and improves employment.

“I’ll entertain raising [the minimum wage] above $8.25 an hour,” Rutherford said. “I don’t know what that number would be because it depends on other issues we have at the same time—unemployment, insurance, where we are in regards to taxation.”

All four candidates said they want to lower taxes, specifically income taxes because they push businesses out of Illinois and diminish job opportunities.

Rauner, a wealthy Chicago businessman, said tax legislation passed by lawmakers like his opponents has caused job growth to become stagnant. If elected, he said he would lower taxes, particularly for business owners.

“The reason I’m running is because we have a failed culture in Springfield, and it’s bipartisan failure,” Rauner said. “The special interest groups that make their money from government … they run Springfield. They bought it. The Democratic Party is sold out to them, and many of the Republicans in Springfield, too. We’ve got to stand up for the taxpayers.”

Dillard, an Illinois senator for more than 19 years, deflected Rauner’s claims, saying he has never in his career supported increasing taxes and he still opposes it.

Dillard said he would lower taxes immediately if he wins the election. He said Gov. Pat Quinn is the driving force behind Illinois’ poor economic conditions.

Rutherford denied allegations of sexual harassment in 2011 and 2012 made by former male employees. He said the allegations are a ploy to ruin his chances of winning because they surfaced six weeks before the primary election.

When Marin asked Brady if residents can trust his business sense, he said despite his business filing bankruptcy in 2006 when the recession hit, he is prepared to deal with Illinois’ debt.

“I know how to rebuild a business, and that is what Illinois needs,” Brady said. “I believe my experience in business gives Illinois an opportunity to turn Illinois around the same way I’ve turned several businesses around.”

Marin asked Rauner to address claims of unfair treatment that resulted from his daughter’s acceptance to Walter Payton College Preparatory High School in 2008 after she was initially rejected, which is rumored to be because of his connection to former Chicago Public Schools CEO Arne Duncan.

“Hundreds of other families have done the same thing, and we didn’t do anything that any other family wouldn’t do,” Rauner said.