Kim on enrollment: ‘We’ve taken it on the chin’ 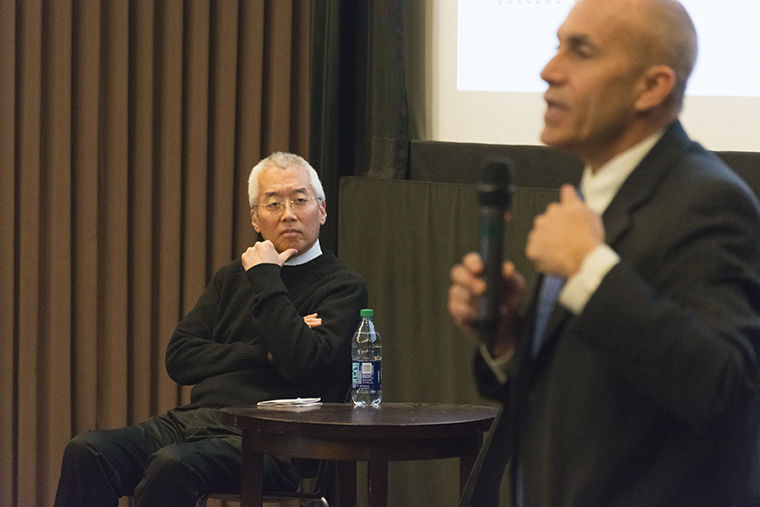 The college has seen drastic enrollment declines over the past decade, with numbers falling by nearly half. President and CEO Kwang-Wu Kim and VP of Enrollment Management Michael Joseph are hoping to turn that around with new initiatives.

Columbia is nearly half the size it was 10 years ago, but President and CEO Kwang-Wu Kim and Vice President of Enrollment Management Michael Joseph introduced a 5-year plan Jan. 29 to get enrollment back up to 8,000 students.

Kim opened the presentation, held at 1104 S. Wabash Ave., with a brief  history of the college’s enrollment and retention struggles over the past several years.

Kim attributed the decline in enrollment in part to admissions moving “from a processing function to an intentional recruitment and selection function.”

Kim chronicled the college’s change in recruitment strategies as a “failed experiment.”

Despite that, he said, “We’ve taken it on the chin; we’ve tightened our belts; we’ve done all the things we needed to do to keep the college stable and still deliver a quality education to our students.  …

“… For the first time, I am 100 percent confident we can do this,” Kim said. “We can actually begin regrowing.”

Since Kim’s start at Columbia in 2013, total enrollment has dropped about 33 percent.

Joseph, who Kim called a “turnaround artist,” joined the college in summer 2017 and is implementing strategies to try and increase enrollment.

According to the presentation, Columbia’s current discount rate is 32 percent of tuition while the national average sits at 50 percent.

“We can’t have families borrowing as much money as they have in the past,” Joseph said.

Historically, change like this is not new to Columbia, according to Head of Archives and Special Collections Heidi Marshall, who attended the presentation.

“Columbia has never been a static institution. It has always morphed and changed to meet changing demands, careers and industries,” Marshall said. “When change takes place, you do see things like enrollment changing a little bit over time as well.”

Associate Professor in Art and Art History Melissa Potter said the enrollment drop mirrored exactly what was happening in her classroom.

This observation was commensurate  with other programs throughout the college, Potter said.

With applications and enrollment down, Potter noticed that certain classes would not fill.

“The faculty worked without rest for five years to figure out how to combine classes and re-write the curriculum so we actually had classes where there would be students,” Potter said.

Solutions to increase the number of students at Columbia include guaranteed admissions programs and becoming more transfer-student-friendly, as reported Jan. 28 by The Chronicle.

Kim said during the Higher Learning Commission’s visit in November, it reported the current enrollment decline is “fairly typical for many institutions in the Midwest.”

A second aspect to Joseph’s plan is to launch a new marketing initiative. “Shape What’s Next” is the concept the marketing team is currently planning to set in place this spring.

Joseph also said the college is expecting to increase the number of academic programs for incoming students, as well as work toward linking existing undergraduate programs with graduate programs.

“I’m a big believer in new programs that bring students in with a notion that they’re going to stay for five years and get their master’s degree while they’re here,” Joseph said.

New academic programs would be introduced around 2022, according to Joseph, and the goal is to gradually add them into the current system.

Kim stressed his commitment to the college’s new enrollment plan and noted he is under contract until 2024, as reported Oct. 25 by The Chronicle.

Kim referenced speculation as to why his contract was renewed and said the main reason was his commitment to witness the success of his enrollment strategy.

“I want to see this through,” Kim said. “I want to be here to be able to look you all in the eyes to see we did it.”